Democratic nominee for U.S. Senate Baron Hill says he's withdrawing from the race. His name will not appear on the November ballot. 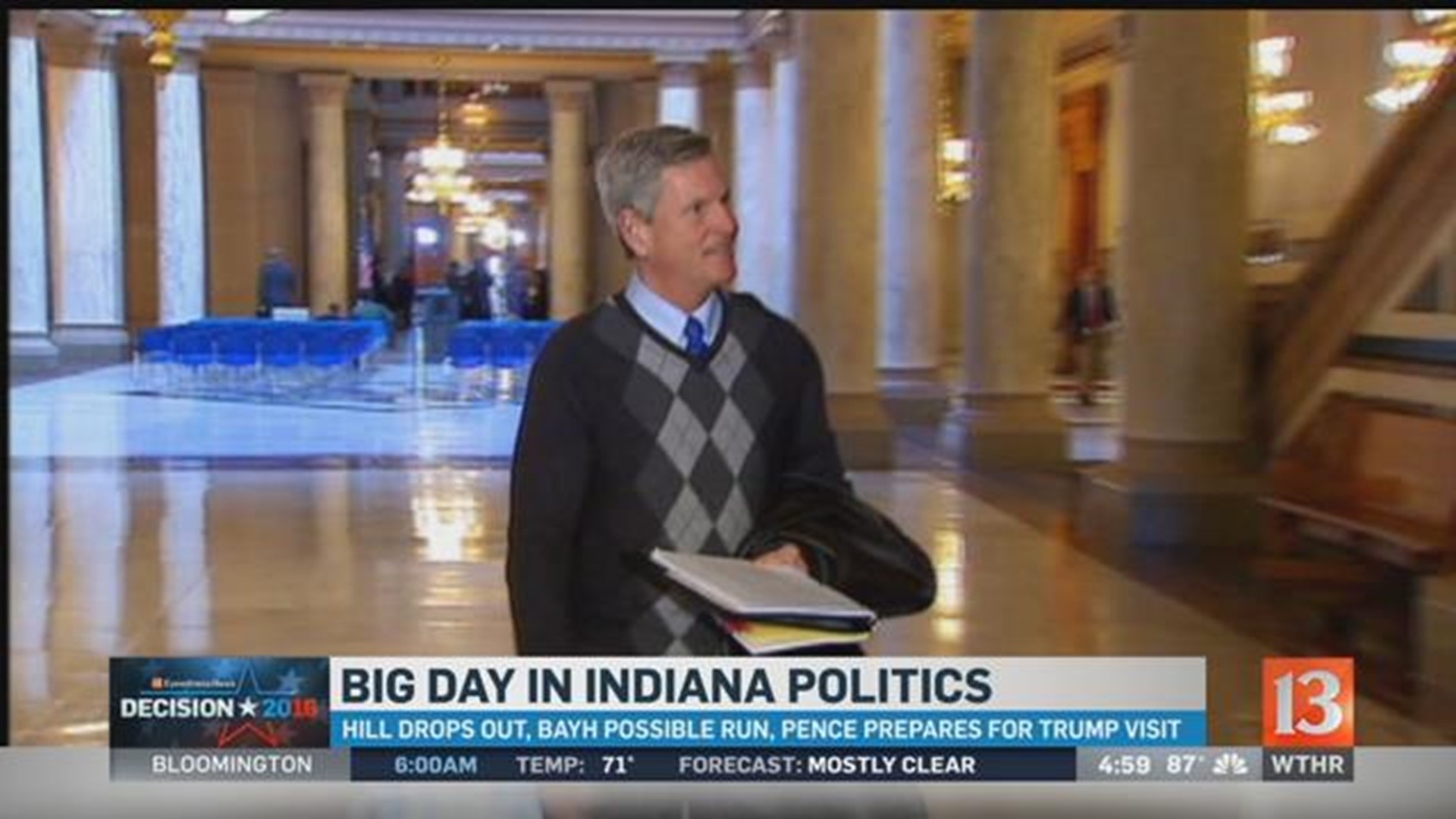 Evan Bayh is in the race for U.S. Senate. Democratic Senate nominee Baron Hill officially withdrew his name from the race and NBC News confirmed Bayh will run for his former Senate seat.

Monday's developments lead to a number of questions, including whether Baron Hill left willingly, and why.

It is a decision designed to win the U.S. Senate. Depending on your perspective, it could be a "stop Trump" movement if he should win - or a "help Hillary" movement if she wins. That, of course, is only if it works.

"I think Evan has a better chance of winning this race than I do.  Let's be honest about it. He does," Baron Hill stated in the living room of his Indianapolis home.

Baron Hill talks about his decision to step aside for Evan Bayh in the race for US Senate on tonight on EWN at 5&6. pic.twitter.com/uN0HRpagKQ

So with that, Baron Hill, the Democratic candidate for United States Senate, pulled the plug on his campaign, deferring to Evan Bayh after he says he got the feeling Bayh was willing to do it.

"I decided to put my ego and vanity on the side and do what was in the best interest of the country. And that is that we had a backstop to a potential Donald Trump presidency," he continued.

Bayh, who retired from the Senate in 2010 following two terms, remained quiet Monday. Indiana Democrats now have ten days before the party can name a replacement.

Bayh's expected move puts the Senate back in play for Democrats. Republicans are widely viewed as defending 24 seats while Democrats have just ten to defend. With Florida's Marco Rubio seeking re-election, that state remains a tossup.

Democrats would need four seats - assuming Hillary Clinton wins - in order to take control of the Senate. Florida, Ohio, Pennsylvania, New Hampshire and Nevada are viewed as close Senate races, with Democrats holding an advantage in Wisconsin and Illinois. Bayh gives Democrats an edge in a state that had previously been written off.

Republicans are likely to attack Bayh on the grounds that he's a Washington insider. On Monday, Republican US Senate candidate Todd Young released a statement reading in part, "A US Senate seat is not a birthright.  It belongs to the state of Indiana."

Indiana GOP "Evan Bayh is a Washington lobbyist who voted for crushing stimulas package & was the deciding vote on Obamacare."

It is interesting to note that retiring Sen. Dan Coats and Evan Bayh have tag-teamed the seat since 1989. The Indiana Republican party issued a statement saying, "Evan Bayh is a Washington lobbyist who voted for the crushing stimulus package and was the deciding vote on Obamacare."

Some speculated Hill, who endorsed then-Senator Obama for President in 2008, was forced out by the Clintons. But others say it was money.

"Mrs. Clinton would have supported Baron Hill, but he also realized you have to have resources to wage a campaign and he did not raise the revenue so that is why he made the decision to get out and support Evan Bayh," Democratic political analyst Robin Winston explained.

It helps that Bayh has a substantial war chest estimated at around $10 million drawing interest in the bank.

"Was this something that was ever requested of you or did you decide this on your own?" we asked.

Baron Hill "This was a decision where I had to take my own ego&set it aside for the sake of 1 of the most important we have ever had."

"This was something I decided. I hold the cards here. I've got the nomination. I don't have to leave this race. I did this on my own. Nobody pressured me to do this," Hill answered.

So the next move is up to Evan Bayh.

Baron Hill says he just started thinking about this in the last seven days with the Friday July 15th deadline looming.

Republicans may still have a choice to make by the end of this week but Democrats in Indiana are working overtime to trump Trump.

"Baron Hill has always put Indiana first, and has been focused on setting aside party differences to strengthen our state and country. I share this commitment, and agree with him that the stakes have never been higher. Baron and I have spoken and we both believe that we must send leaders to Washington who will put Hoosiers' interests ahead of any one political party."

"I can’t thank you enough for your support over the last year and a half since I first announced my candidacy for the U.S. Senate. We have worked tirelessly to raise money and to build a grassroots network that would hopefully carry us to victory on Election Day.

I got into this race to put Hoosiers first and to always do what’s right no matter the political cost. That’s how I have run each of my races before, and that’s what I have done throughout my time in public service – from the Indiana General Assembly to the U.S. House of Representatives.

I have never run away from tough decisions or tough fights. But, I am a pragmatic person who will always put my country and my state first. I am also a proud Democrat who wants to see an Indiana Democrat fighting for Hoosier families alongside Senator Joe Donnelly in the U.S. Senate. And, I want to do everything in my power to ensure a U.S. Senate that will govern responsibly.

That is why, after consulting with my family, my staff and party leaders, I am withdrawing from the U.S. Senate race and removing my name from the November ballot.

While our campaign had been making great progress and building momentum all over Indiana, it is simply not enough to fight back against the slew of out-of-state, special interest and dark money that is certain to come our way between now and November.

Democrats have a very real chance at winning this Senate seat, especially with a strong nominee who has the money, name identification and resources to win. I do not want to stand in the way of Democrats winning Indiana and the U.S. Senate. That would not be fair to my party or my state. And, the stakes are far too high in this election not to put my country above my own political ambitions.

To those of you who have been with me from the very beginning and who have contributed to this campaign or any of my previous campaigns, I cannot thank you enough for the support you have given to Betty and me. We are eternally grateful, and your faith in us will never be forgotten.

While I am withdrawing from this race, I intend to stay involved and do everything I can to help elect a Democrat to the U.S. Senate. I hope you will continue to do the same.

May God bless you and your family, and may He continue to bless the great state of Indiana."

"After he cast the deciding vote for Obamacare, Evan Bayh left Indiana families to fend for themselves so he could cash-in with insurance companies and influence peddlers as a gold-plated lobbyist. This seat isn't the birthright of a wealthy lobbyist from Washington, it belongs to the people of Indiana."

"The 2016 election is about the future, not the past. Evan Bayh’s arranged entrance into this race means that Washington Democrats have the candidate they want to continue the failed Obama-Clinton policies of the past eight years.

Fortunately, Hoosiers will have a clear choice this fall. Evan Bayh has a long track record of saying one thing to Hoosiers and then doing another in Washington. Bayh supported big government policies like Obamacare and the White House’s lackluster economic agenda. He will have to explain to Hoosiers why he rubber-stamped Barack Obama’s agenda for two years before deciding to leave the Senate.

Todd Young – a graduate of the Naval Academy and a Marine veteran – has the character, leadership qualities and Hoosier common-sense to be an outstanding senator. He has a proven track record of pushing for innovative, conservative solutions to our nation’s biggest problems and has consistently fought for smaller, more efficient government. “It is time for a new generation to represent Hoosiers in the Senate."

John Zody, Chairman of the Indiana Democratic Party, released the following statement after Baron Hill announced his decision to withdraw from the U.S. Senate Race.

"Baron Hill is a friend and a mentor, and I am proud to know him. His service to this state has always come from the heart – he is one of the most principled people I have ever had the pleasure of knowing. Congressman Hill has informed me of his withdrawal from the U.S. Senate race, and as State Party Chair I will begin the process for the Democratic State Central Committee to fill the ballot vacancy in accordance with Indiana state law."