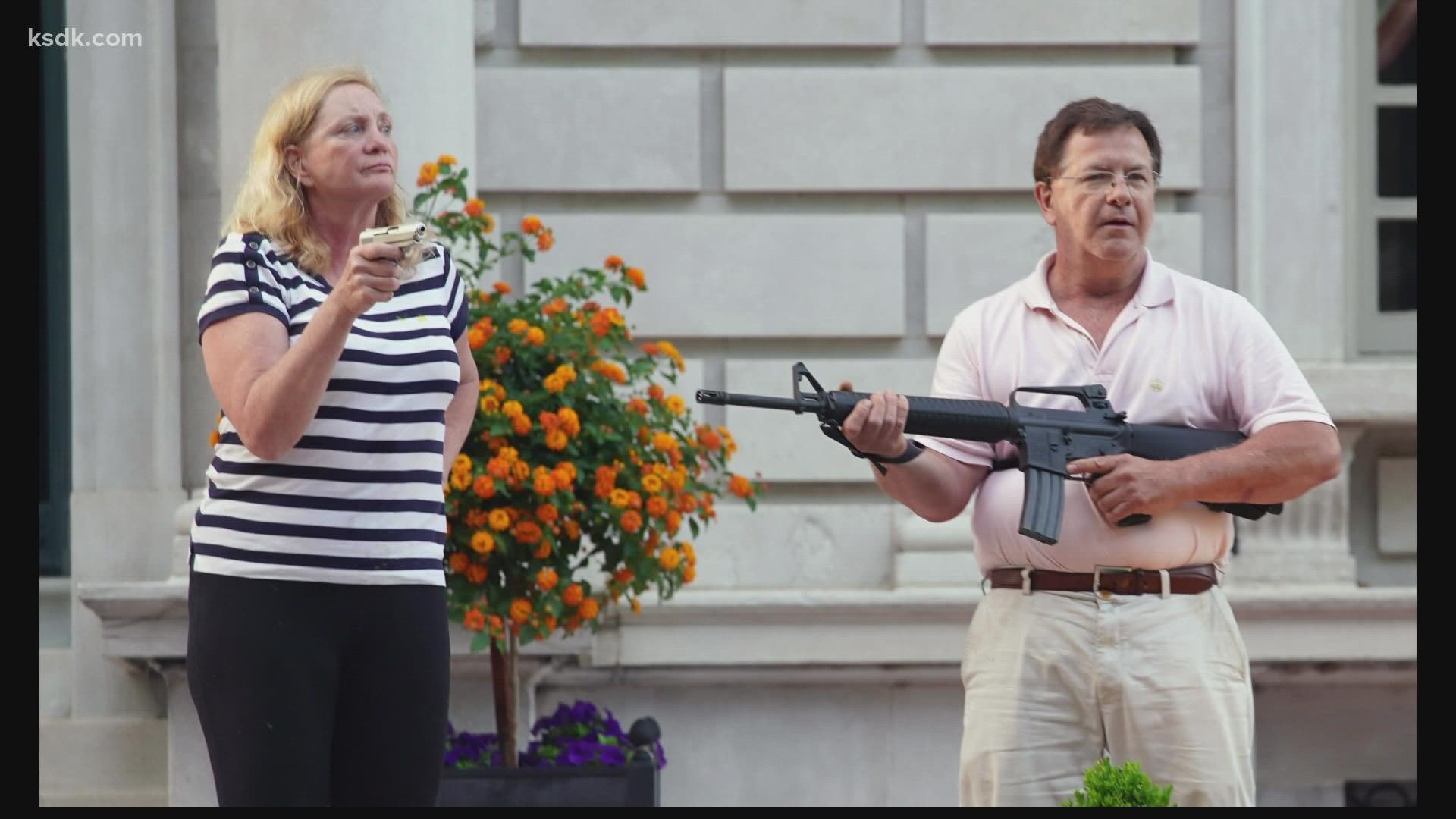 The McCloskeys were charged last year after they pointed guns at protesters in front of their home last summer. On June 17, a judge approved a plea deal from the couple while they were in court for a scheduled hearing.

Mark McCloskey pleaded guilty to a count of fourth-degree assault, which was filed June 10 and was a Class C misdemeanor. He was originally charged with unlawful use of a weapon and tampering with physical evidence — both felony charges.

The plea deal called for Mark McCloskey to pay a $750 fine. Patricia McCloskey was fined $2,000 to the courts and ordered to pay $10 to the crime victims' fund. The pardon means they will no longer have to pay that fine.

Because the charges were misdemeanors, the McCloskeys did not face the possibility of losing their law licenses or their rights to own firearms.

Both of the weapons pictured in the viral photos and videos were ordered to be turned over to the state and destroyed.

The McCloskeys' lawyer also had asked for the guns to be destroyed, rendered ineffective and then given to a charity for auction as historic artifacts. The judge denied the request.

The charges stem from an incident in front of their Central West End home last summer.

On June 28, 2020, the McCloskeys were seen in videos and photos pointing guns at protesters who were marching to the home of then-St. Louis Mayor Lyda Krewson's house to call for her resignation.

In the days and weeks that followed, they have received support from conservative politicians. Missouri Gov. Mike Parson and former President Donald Trump decried the charges. Missouri Attorney General Eric Schmitt stepped in to help the McCloskeys, trying to get the case dismissed.

The McCloskeys emerged as celebrities in conservative circles. They spoke on video during last summer's Republican National Convention.

“We’re thrilled with the governor's decision," the McCloskeys' attorney Joel Schwartz said. "They are looking forward to putting this behind them so he can focus on his campaign.”

Mark McCloskey announced he was joining the race for U.S. Senate and appeared at St. Louis County Council meetings about the mask mandate. The McCloskeys are St. Louis City residents.

Parson’s legal team has been working through a backlog of clemency requests for months.

He hasn't yet taken action on longtime inmate Kevin Strickland, who several prosecutors now say is innocent of a 1978 Kansas City triple homicide. Parson could pardon Strickland, but he has said he’s not convinced he is innocent.

Missouri's Democratic leader contrasted Parson's treatment of Strickland's case with the McCloskeys in bitter denunciations of the governor's action.

“It is beyond disgusting that Mark and Patricia McCloskey admitted they broke the law and within weeks are rewarded with pardons, yet men like Kevin Strickland, who has spent more than 40 years in prison for crimes even prosecutors now say he didn’t commit, remain behind bars with no hope of clemency,” Missouri House Democratic Minority Leader Crystal Quade said in a statement.

Democratic state Rep. LaKeySha Bosley said, “The governor’s stunt ominously underscores that under his watch, justice belongs only to the privileged elite in this state.”