The county is asking Bridgeport and Douglas County residents or anyone who may have information for help locating the apples. 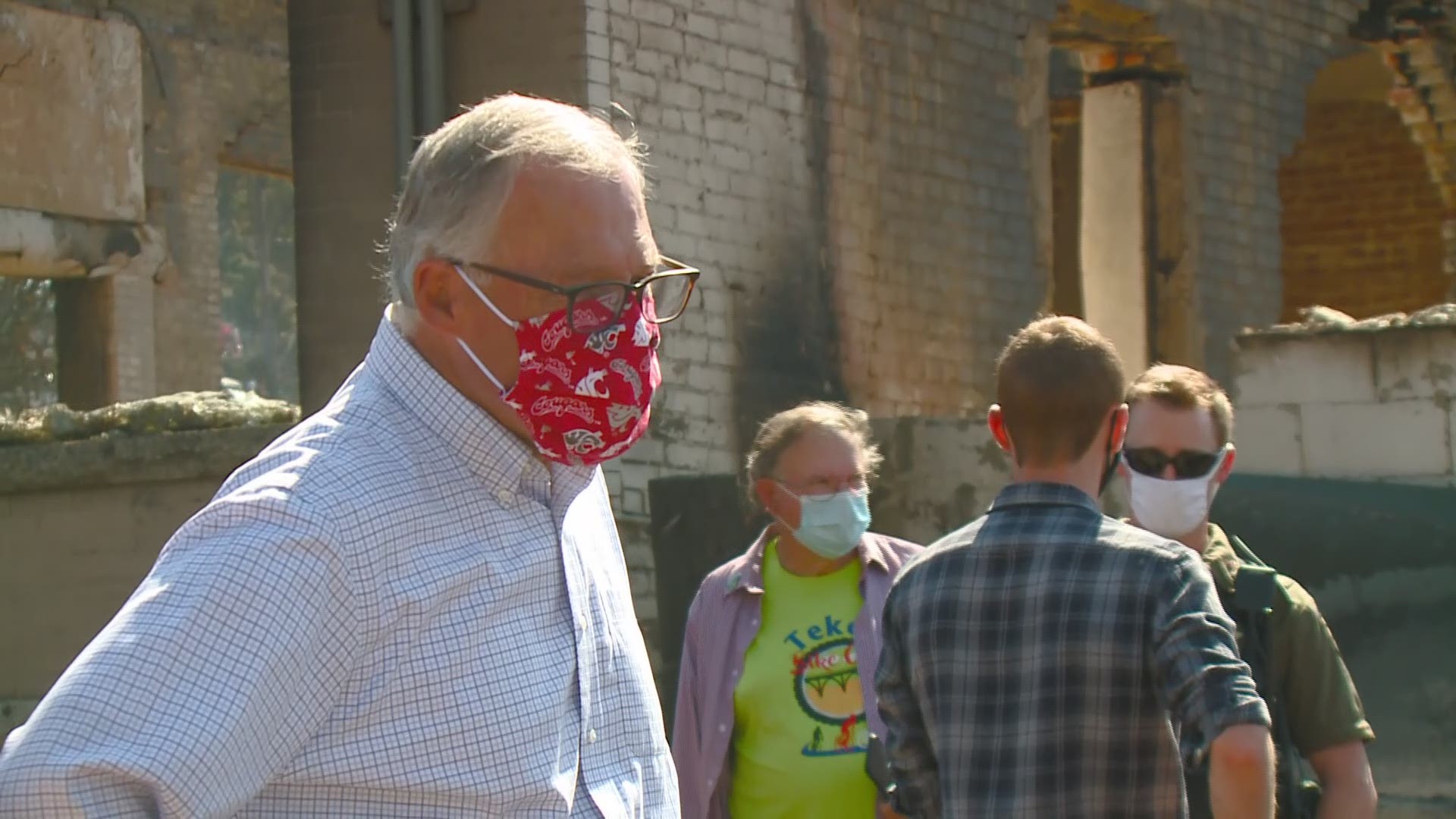 DOUGLAS COUNTY, Wash. — Washington Governor Jay Inslee gave apples to the towns of Bridgeport and Malden, as well as a retirement home in Omak, that were unknowingly infested with apple maggot larvae, according to a Facebook post from Douglas County officials.

Inslee visited the areas following devastating wildfires in both areas. The governor released a statement Wednesday regarding the incident.

“Last week Trudi and I wanted to express comfort for the communities suffering from devastating fires," Inslee said in the statement. "When I visited some of these areas, I took some apples we picked from our tree in Olympia. We regret this mistake. This a good reminder of the importance of awareness around apple quarantine. We appreciate the Washington State Department of Agriculture’s efforts to help recover these apples and we are assisting to help make that happen.”

The post says the Honeycrisp apples were grown at the Governor’s Mansion in Olympia. According to a map from the Washington State Department of Agriculture, Thurston County is under a apple maggot quarantine, while Douglas County is not.

The county is asking Bridgeport and Douglas County residents, or anyone who may have information, for help locating the apples that were brought to the area.

“There is reason to believe that they may have been dumped in a local orchard or transported with other, non-contaminated apples from the area,” the post reads.

However, Chelan-Douglas Horticultural Pest and Disease Board Director Will Carpenter said on Wednesday afternoon that most of the Bridgeport and Omak apples had been recovered.

According to the Washington State Department of Agriculture, the purpose of the apple maggot quarantine is to stop the spread of apple maggot into pest-free areas of the state. State law prohibits the movement of homegrown fruit and municipal waste from a quarantined area into or through a pest-free area.

According to Washington state law, violation of the apple quarantine is subject to a "civil penalty not exceeding $5,000 per violation." WSDA said there are no plans to prosecute the governor.

If you have any information about the location of the tainted apples, you’re asked to contact Carpenter by phone at 509-667-6677 or by email at Will.Carpenter@co.chelan.wa.us.

For folks in north central Washington, apples were seen as a bizarre gift to begin with.

"There's apples everywhere. We're surrounded by apples. It's apple harvest," said Shannon Hampe, who met with Inslee during his Okanagan visit. "There's a ton of things he could've done that would've been a little better received, I would think, than the apples... a lot of people thought it was a real slap in the face."

Still, Hampe said she hoped the gesture was well-intentioned, if tone-deaf. But when people started taking a closer look at the fruit, they were again disappointed.

"My son brought me the apple… I always crack the apples open, and it was like… oh my gosh. This is rotten! This is horrible. Nobody would eat this!" Hampe said.

And beyond the gross factor, maggot larvae can pose a real threat to the critical apple crop in the region.

"We rely heavily on exports markets and those export markets don't want apple maggot. And they don't want fruit coming in with it. And so that's why we have apple maggot quarantine zones," Carpenter said. "We try to keep the apple maggot out of these areas that we grow tree fruit, and specifically apples, so that our growers and our companies here in Washington can continue to grow that fruit and ship it."

"I mean that's our economy, that's everything that we have here," Hampe said. "And introducing a pest like that could be devastating."