South Tryon Street will have "Black Lives Matter" painted onto the asphalt Tuesday as protests continue across the country. 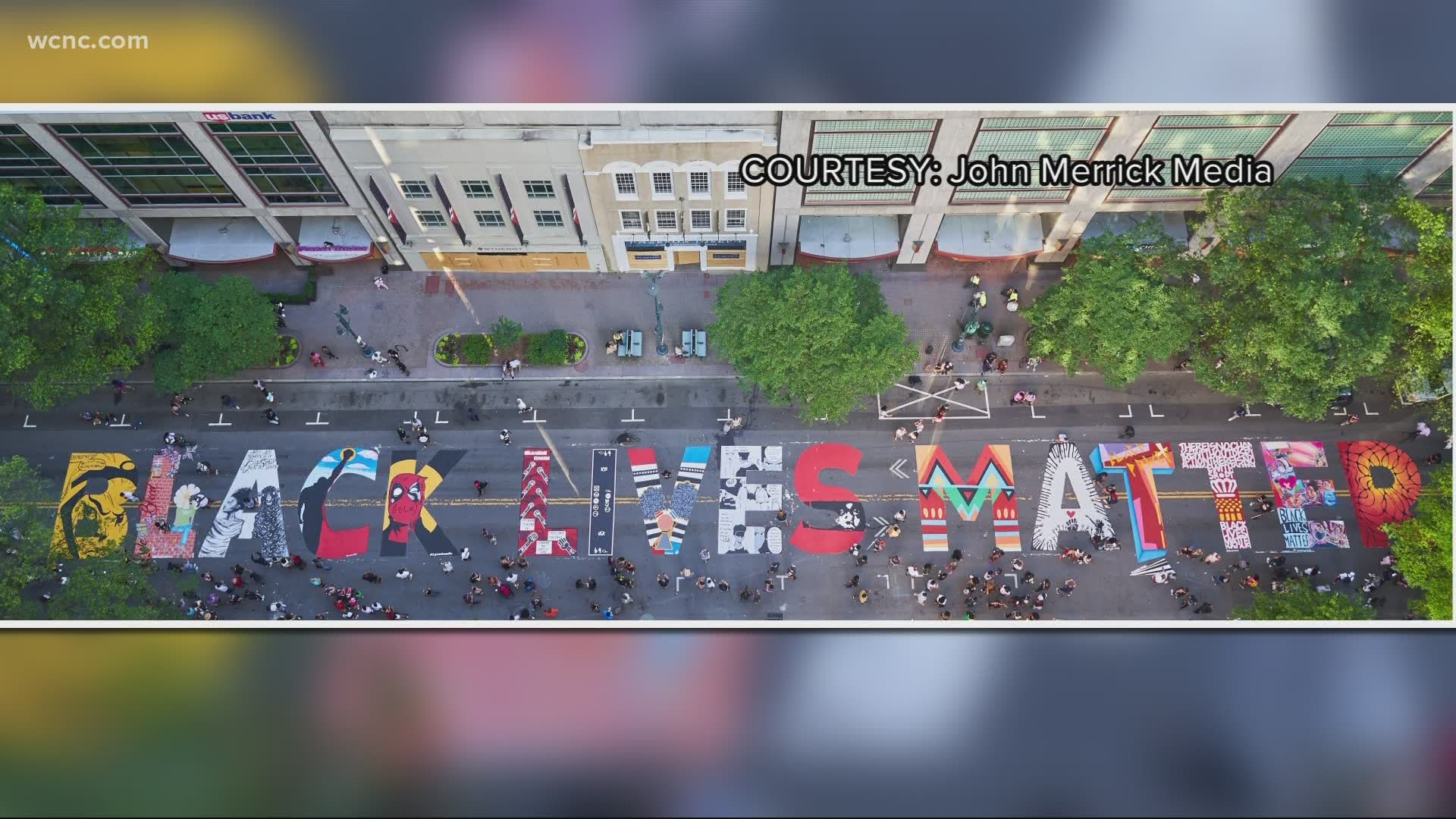 CHARLOTTE, N.C. — It all started with a tweet on June 5th.

Taiwo Jaiyeoba, Assistant City Manager and Chief City Planner for the city of Charlotte tweeted, “I’m reposting again...imagine for a few minutes that we can “art-ify” the intersection of Trade and Tryon with “Black Lives Matter!” And leave it in that space for 2 weeks. Wouldn’t that send a strong message?!

Jaiyeoba says he was inspired after seeing the words, “Black Lives Matter” painted in giant yellow letters down a street in Washington, D.C.

Shortly after his tweet, he says Charlotte Mayor Vy Lyles gave him the go-ahead.

Jaiyeoba says the city quickly teamed with “Charlotte is Creative,” and together they found 17 local artists to participate. He says unlike the mural painted in D.C., each of the Charlotte artists were assigned a letter to create a unique individual design.

“I came up with Deadpool because considering everything going on right now, it’s pride month, you’ve got the black lives matter movement, and he’s like one of the more outspoken, radical superheroes,” says artist, Garrison Gist who was assigned the letter, “K.”

Charlotte artist Kyle Mosher was assigned the letter “I.”

“We all have a shared goal that this is something bigger than ourselves, right, tossing ego and everything aside and the fact that we were able to get 18 plus artists to come together in 48 hours, and have a design approved with zero revisions is really a testament to the city, the artists, and the people involved,” he says.

Mosher is no stranger to larger-than-life paintings. For the last several years, he’s painted murals from South End to NoDa, including the XO wall. But painting this time, he says, feels different.

“You can feel it, it's palpable, this is something that’s going to be written about in history books and I’m just honored and humbled to be a part of it,” he says.

But Charlotteans won’t have to wait until it’s published in a book. Tuesday, many stopped to see, to feel, and to reflect on why these three words were painted in the first place.

For parents of all races, who brought their children, it was an opportunity to teach.

“We love what the city is doing, we support the city, we support black lives, and we’re thrilled that they’re doing this,” said Melissa Brokaw.

Due to construction at the corner of Trade and Tryon, Jaiyeoba says the city decided to paint the mural on S. Tryon Street between 3rd and 4th streets, a block filled with offices, a hotel and a lot of pedestrian traffic.

Jaiyeoba says the city will soon be putting up signs, reminding everyone who comes to view the mural to social distance and to wear a mask.

As for how long the mural will stay, Jaiyeoba says the letters for Black Lives Matter, were painted using the same paint the city uses for traffic markers, saying the mural will be permanent until the city resurfaces the street.

A symbolic image, in the heart of the city.

On Friday, the city tweeted saying South Tryon Street between Third and Fourth will be temporarily closed to vehicles so residents can enjoy the painting safely.