Believe It Or Not? 13 Investigates claims by the Indiana gubernatorial campaigns

One of Indiana's most notorious rip-offs seems to make it into one of this season's campaign ads. 13 Investigates shows you how real-life misfortunes make the stretch into politics. Believe it or not? 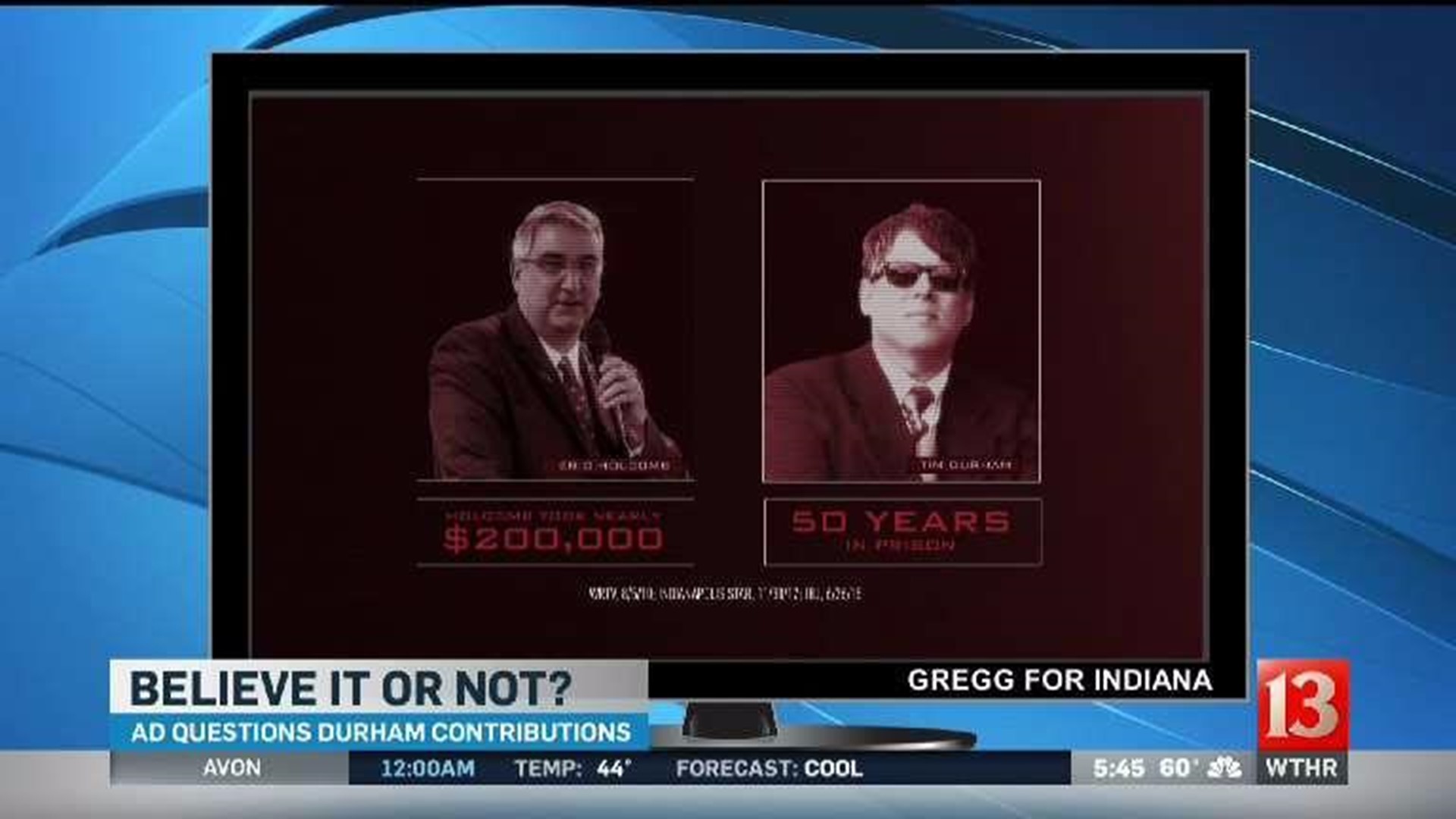 INDIANAPOLIS (WTHR) - One of Indiana's most notorious rip-offs seems to make it into one of this season's campaign ads. 13 Investigates shows you how real-life misfortunes make the stretch into politics. Believe it or not?

Claim 1: John Gregg for Indiana claims Eric Holcomb took campaign donations from the mastermind of a Ponzi scheme that ripped off seniors and working families.

Here in Indiana, the name Tim Durham is likely to evoke images of luxurious living and the downcast faces of retirees who lost it all to one man's greed. Durham's Ponzi scheme is making its way into the governor's race. At issue: political donations and the effort to recoup payments.

The ad puts Eric Holcomb at the center of the Tim Durham investment scam.

Based on court records, Durham began taking out exorbitant loans from Fair Finance in Akron, Ohio shortly after he purchased the company in 2002. Durham eventually bilked the company out of $200 million and into bankruptcy. In the process, the lifetime savings of seniors and working families were lost.

In 2009, the FBI raided Durham's offices and homes and seized expensive cars, jewelry, art and business records. In the fallout, information surfaced showing Durham had given the State Republican Party $185,000 in campaign donations and another $195,000 to former Gov. Mitch Daniels.

While no one disputes Durham gave money to Democrats and even more to Republicans, including former Gov. Daniels, the question remains: was Eric Holcomb at the center of it all?

Believe it or not? Yellow light

Gregg's campaign tells us Holcomb was the "chief political operative." 13 Investigates has found Holcomb worked as Mitch Daniels' political director at the time some of the donations were made. Holcomb held roles in both of Daniels successful elections. Holcomb later took over as Chair of the Republican party in 2011.

Holcomb's role in campaign in 2007

Believe it or not rating: For this claim, we give the Gregg team a yellow light with a great deal of caution at the suggestion that Holcomb or any other campaign staffer in either party knew the money was part of a Ponzi Scheme

Claim 2: John Gregg for Indiana claims Holcomb refused to return the campaign cash and that fraud victims had to take Holcomb to court to get back what they could.

The Gregg campaign ad claims: “Holcomb held on to the money for his political operation instead of returning it to the elderly and working families who needed it. So the victims went to court forcing Holcomb to repay. Holcomb keeps campaign cash. Families get ripped off.”

Federal bankruptcy trustees are assigned by the court to recover assets to help pay back creditors. In Durham's case, it was an effort to give back money lost by investors of Fair Financial. In doing so, the trustee sent out letters asking Daniels and other politicians to pay back $900,000 in Durham campaign donations. The request came at least two years after the money had reportedly been spent. At the time a spokesman for the party said that it would withhold comment "until a court rules in the case." In the end, the Republican party gave back $88,000 as part of a settlement.

Believe it or not rating: Red light

Holcomb took over as Chairman of the State Republican party a year after those bankruptcy trustees came calling. The Holcomb camp says no other donations had been accepted by Durham after 2007. So it is feasible that between 2007 and 2011 the money had been spent. The fraud victims in the Durham case did go to court...to seek justice for $200-Million in losses. To say that fraud victim's actions were solely focused on Eric Holcomb is misleading. This one gets a red light. Believe it or not?