On Tuesday, the Secretary of the Army directed Arlington National Cemetery to safely host Wreaths Across America this December. 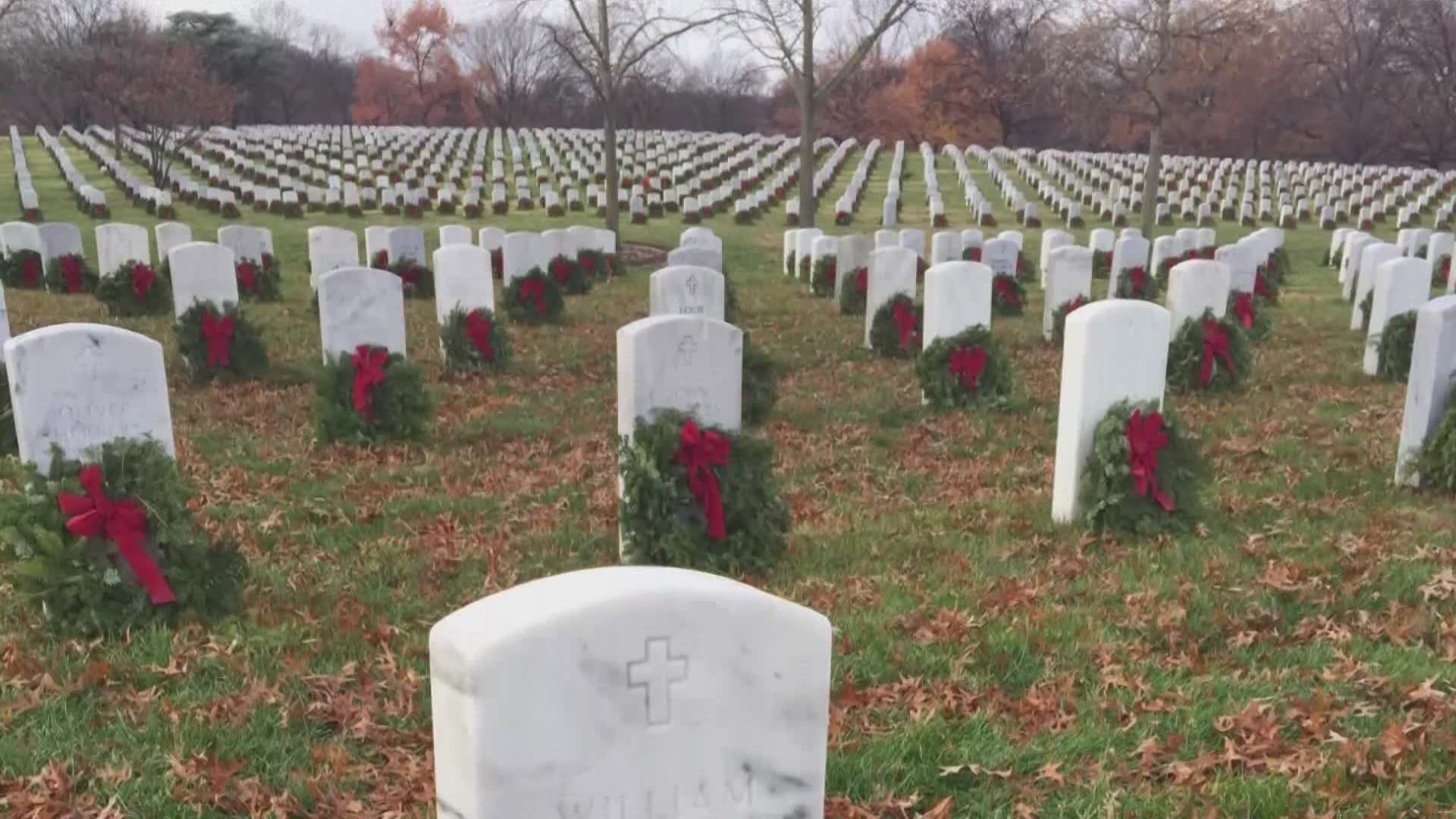 ARLINGTON, Virginia — Every December, wreaths are placed on the graves of fallen soldiers at Arlington National Cemetery. But like most things this year due to the coronavirus pandemic, the annual event was canceled.

The cemetery announced Monday it would not be allowing the placement of wreaths on graves this year—a decision that has blindsided the organization Wreaths Across America (WAA).

"As an organization, we are shocked by this unexpected turn of events. To say we are devastated, would be an understatement," the organization wrote in a Facebook post.

In a press release Monday, the Arlington National Cemetery said following a “thorough analysis,” they determined they “could not implement sufficient controls to mitigate the risks associated with hosting an event of this size under current and forecasted infection and transmission rates, while still conducting a respectful and honorable public event.”

RELATED: Wreaths Across America will not place wreaths at Arlington National Cemetery due to COVID-19

But after WAA as well as lawmakers and veterans from all over the country chimed in on the decision and called on the Arlington National Cemetery to reconsider, they did.

On Tuesday, the Secretary of the Army directed Arlington National Cemetery to safely host Wreaths Across America.

"We appreciate the families and visitors who take time to honor and remember those who are laid to rest at our nation’s most hallowed ground," the cemetery wrote in a statement. "Arlington National Cemetery will provide an update on the final schedule soon."

The Arlington National Cemetery says COVID-19 precautions will be in place.

WAA coordinates wreath-laying ceremonies at more than 2,100 cemeteries across the U.S. In Maine, where the WAA is headquartered, typically a convoy with thousands of wreaths makes the trek to Arlington, stopping in various Maine communities along the way. Last year, the convoy stopped in Columbia Falls, Ellsworth, and Portland as well as Gorham High School, Thornton Academy, and Kittery Trading Post.

In a press conference Tuesday afternoon, WAA Executive Director Karen Worcester said immediately after the cancellation decision was made on Monday, they jumped into action to work with the cemetery to show the event could be held safely.

Worcester explained the decision is specific to Arlington National Cemetery and said other events across the country are still up in the air. She said volunteers will be limited because of the pandemic, but their mission remains the same: to honor and remember veterans and their families.

"This year, Wreaths Across America will have 2,500 other participating locations nationwide, the largest ever," Worcester said. "We will be fulfilling the mission in every state and doing so safely following local guidelines in all cases. I can’t say enough about our dedicated volunteers who have come together in a difficult year to overcome nearly every obstacle to help ensure the mission continues.”

In a tweet on Tuesday, President Donald Trump claimed credit for reversing the decision.

"I have reversed the ridiculous decision to cancel Wreaths Across America at Arlington National Cemetery. It will now go on!"

I have reversed the ridiculous decision to cancel Wreaths Across America at Arlington National Cemetery. It will now go on!

In response to Trump's involvement, WAA said they are not clear at what level the decision was made, but the reversal was provided through the Secretary of the Army.

"Over Monday evening into the morning [Tuesday], we saw feedback from thousands of dedicated supporters and volunteers across the country from every background, expressing emotions ranging from shock to anger and sadness," Amber Caron, WAA director of communications said in a statement to NEWS CENTER Maine. "We can rightfully assume that some of these individuals made outreach on their own. As an organization, we exhausted every avenue available to us. We are not clear at what level the decision was made, but the reversal was provided to us by Arlington National Cemetery leadership [Tuesday], through the Secretary of the Army. Wreaths Across America looks forward to working with Arlington on a collaborative objective to fulfill both our missions. And for that we are grateful and focused on moving forward towards a successful wreath placement this December."

Portland Police Officer Kevin Haley has been volunteering for WAA since learning about it in 2033. Over the years he has coordinated and organized convoys bringing hundreds if not thousands of fellow Mainers, including other police officers and Maine students, to lay wreaths at the national cemetery in Arlington.

Haley's brother, William P. Haley, was an SMSGT in the U.S. Air Force and is buried in Arlington. Each year Haley places a wreath on his brother's grave.

"It was tough news to hear, it was a shock to us," Haley said following the news of the event cancellation.

Haley first learned about WAA from his brother Patrick, who like William served in the Air Force.

Haley said, "Our brother is buried in Arlington so we quickly got attached and wanted to follow their mission which is remember, honor, and teach. It's very contagious."

"When you first experience it you can talk about it all you want but until you actually come down to Arlington to see all the stones you figure everything out, what it stands for. It's not just about putting the wreath on a grave it's about paying the respect to our fallen heroes," he said. "Everybody that comes to Arlington National Cemetery they get it. What they get is American pride. That freedom isn't free and we pay respect to our fallen heroes."

Fighting back tears, Haley said, "Every year we cover his stone to make sure the Haley family is able to pay their respects to him."

Haley's son is named William after his uncle. Graves at Arlington, a quarter-million of them, are covered with wreaths. "We all go to each stone and make sure that stone is laid with a wreath from Wreaths Across America and we pay our respects while we're there."

While people like Haley might not be able to make the journey to Arlington this year, Worcester said they will do whatever they can to ensure the wreaths are laid, in a safe way.

Worcester said, "WAA can only place as many wreaths as we can this year, it is up to all of us to show support and to ensure the future of Wreaths Across America’s mission."

This story will be updated.