9-year-old Ezra Blount is fighting for his life after being trampled at Astroworld Festival, family says

The boy's aunt said he's an outgoing performer who loves to sing and dance. Travis Scott is his favorite rapper so his dad Treston took him to the concert. 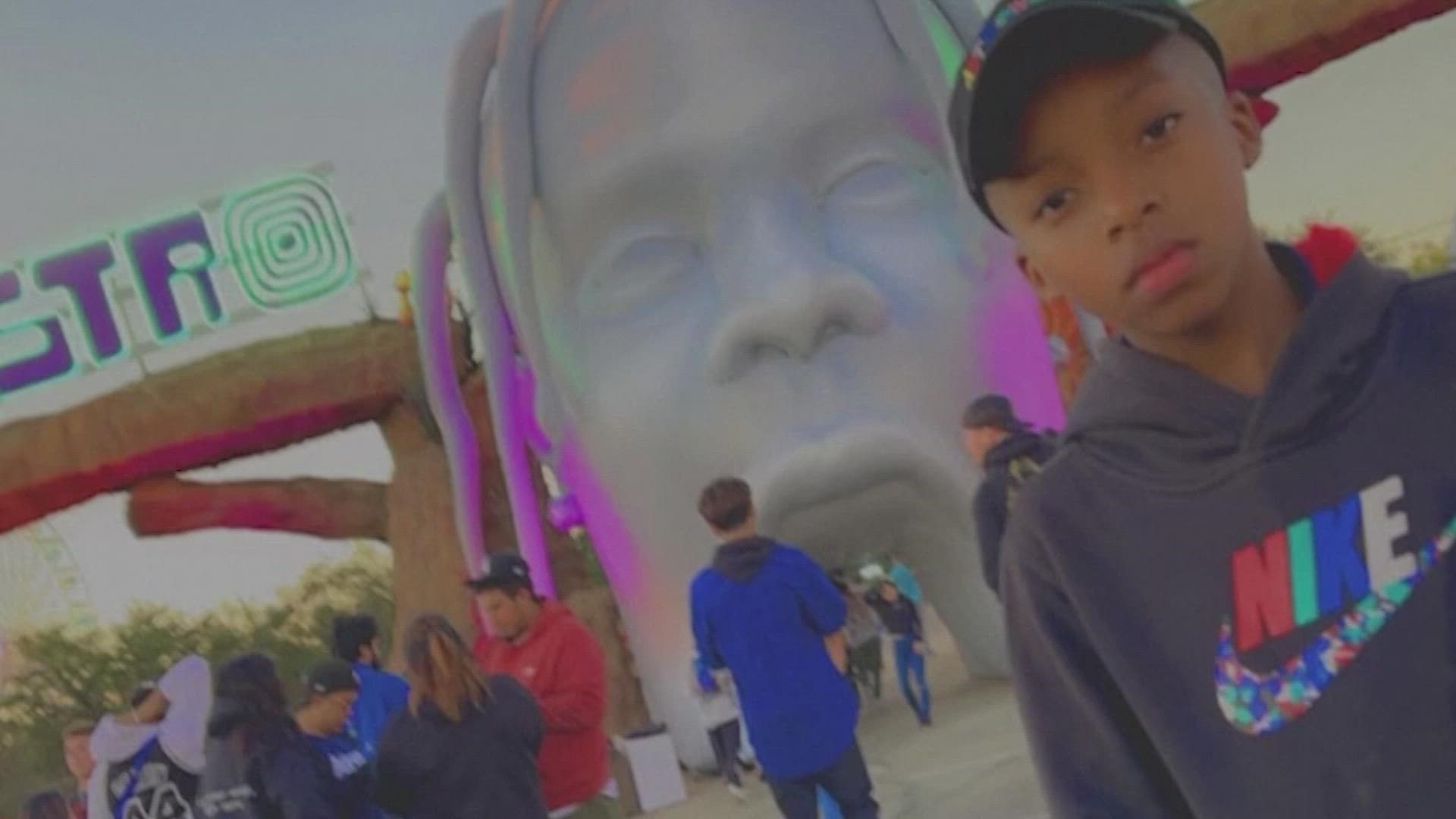 HOUSTON — A 9-year-old boy is fighting for his life after he was injured by the crowd surge during the Travis Scott concert at the Astroworld Festival, according to family members.

Ezra Blount, 9, is on a ventilator and in a medically induced coma at Texas Children’s Hospital. He suffered severe injuries during the crowd surge Friday night, according to his grandmother Tericia Blount.

RELATED: Astroworld Festival tragedy: What we know about the eight victims

"His condition hasn't really changed. He still has the injured organs, heart, liver, the lungs, the brain," grandfather Bernon Blount said Tuesday. "And right now, we're just waiting to see what plan, course of action the doctors are going to take as far as trying to heal him and help him."

The boy's aunt said he's is an outgoing performer who loves to sing and dance. Travis Scott is his favorite rapper so his dad Treston took him to the concert.

Photos shared by their family showed Ezra and his Treston at the festival before the chaos that led to the deaths of eight young people.

"They were expecting to come and have a good time with each other, bond as father and son," Bernon told us.

Treston said he was carrying Ezra on his shoulders when the crowd began to surge towards the stage during Scott’s performance.

"I began to be crushed until I couldn't breathe. I passed out and I woke up my son was gone," Treston said on his GoFundMe page.

The frantic family called hospitals until they found him. Texas Children's had listed him as a "John Doe" because they hadn't been able to identify him.

Based on his injuries, Treston believes his son was trampled by the crowd.

Now, they're at his bedside and praying for a miracle.

Here’s 9 year-old Ezra Blount. He was at #Astroworld Friday with his dad. Now he’s in the hospital on a ventilator in a medically induced coma. His father says he was trampled. I talked to his aunt. She said, “We’re all hoping and praying he just opens his eyes.” @KHOU pic.twitter.com/P23rgH92Ra

"Speaking as granddad to Ezra and daddy to Treston, I'm angry because this has altered our family, this is altered Ezra, it's altered, you know, even the legacy of our family because we don't know if Ezra is going to recover from this," Bernon Blount said. "This is my son's only son, so I'm angry because it's disrupted our family and this could have been avoided if people in positions of power had done the right thing."

Ezra’s family has also retained attorney Ben Crump his co-counsel of Alex and Bob Hilliard to represent them in any legal action as a result of the tragedy at the Astroworld Festival.

“Hi I am Treston Blount I am starting this fundraiser for my son he’s 9 years old his name is Ezra Blount. We attended Travis Scott’s Astro world fest I had my son on my shoulders awaiting drakes stage appearance I began to be crushed until I couldn’t breathe I passed out And I woke up and my son was gone and due to his severe injuries which are swelling in the back of brain damage and trauma to nearly all organs we are certain that he was trampled and is still in induced coma we are thankful for his life and thankful for all the prayers and positivity we are asking for donations for his medical bills and anything that comes along with this tragedy.”

If you'd like to help, here's the GoFundMe page.

NEWS ALERT: @AttorneyCrump & co-counsel Alex and Bob Hilliard have been retained by the parents of EB, a 9-year-old child who was trampled at the Astroworld Festival. EB sustained life-threatening injuries and is currently hospitalized, in a medically-induced coma. pic.twitter.com/XwSivyPLtM