People are questioning President Trump's health after he moved slowly down a ramp following a speech at West Point. Trump defended himself, saying it was slippery. 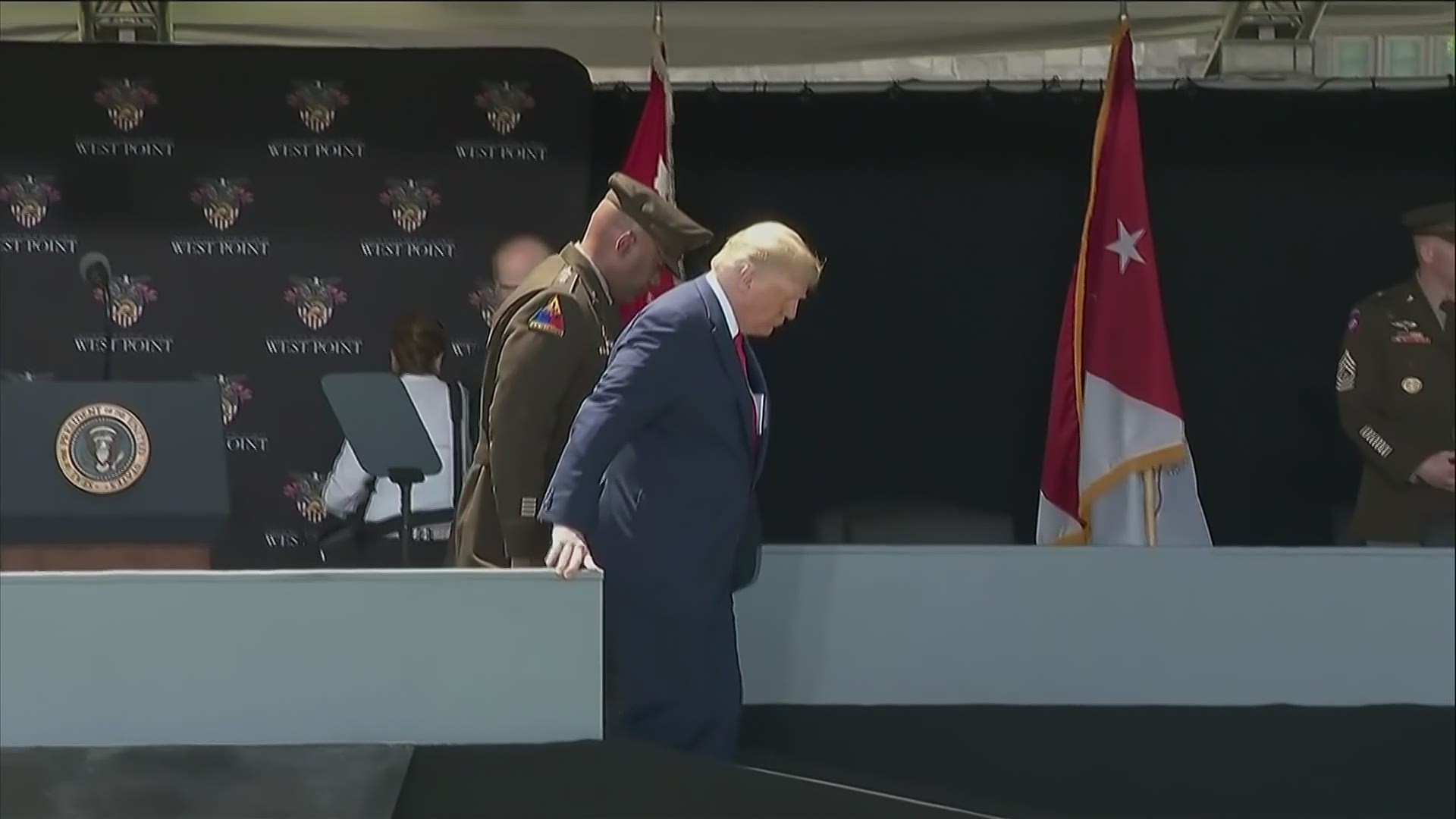 WEST POINT, N.Y. — Following a commencement address at West Point on Saturday, President Donald Trump descended the stage via a long ramp, stepping cautiously as he watched his feet.

Trump took to Twitter to defend his walking, saying the ramp was slippery.

"The ramp that I descended after my West Point Commencement speech was very long & steep, had no handrail and, most importantly, was very slippery. The last thing I was going to do is “fall” for the Fake News to have fun with. Final ten feet I ran down to level ground. Momentum!" he wrote.

The hashtags #TrumpIsUnwell and #RampGate were trending on the social media site Sunday.

In his speech Saturday, Trump highlighted the diversity of West Point's graduating class and appealed for America's newest officers to uphold the country's core values, a speech emphasizing unity at a time when the commander in chief's relationship with military leaders has become strained and questions have arisen about the role of soldiers in a civil society.

"You have come from the farms and the cities, from states big and small, and from every race, religion, color, and creed. But when you entered these grounds, you became part of one team one family, proudly serving one American nation,'' Trump told the more than 1,100 graduating cadets.

Trump’s commencement speech came as arguments rage over his threat to use American troops on U.S. soil to quell protests stemming from the killing of George Floyd by a Minneapolis police officer.

The president told the Class of 2020 that “you became brothers and sisters pledging allegiance to the same timeless principles, joined together in a common mission: to protect our country, to defend our people, and to carry on the traditions of freedom, equality and liberty that so many gave their lives to secure.” He said they “exemplify the power of shared national purpose to transcend all differences and achieve true unity. Today, you graduate as one class, and you embody one noble creed: duty, honor, country.”

Tensions between the White House and the military have escalated since nationwide protests began over the death of Floyd, a black man who was pinned by the neck by a white police officer for several minutes despite saying he couldn’t breathe.

Trump seemingly alluded to the protests, saying: "What has made America unique is the durability of its institutions against the passions and prejudices of the moment. When times are turbulent, when the road is rough, what matters most is that which is permanent, timeless, enduring and eternal.’’

He said that from the U.S. Military Academy came "the men and women who fought and won a bloody war to extinguish the evil of slavery within one lifetime of our founding.’’

Lt. Gen. Darryl A. Williams, the West Point superintendent and the first African American to hold the post, told the cadets that their “challenges ahead will require moral and physical courage.”

In the past two weeks, Trump yelled at Defense Secretary Mark Esper for publicly opposing Trump's call to use active-duty troops to crack down on the demonstrations. Trump then shut down Esper’s attempt to open a public debate on removing the names of Confederate Army officers from military bases.

Gen. Mark Milley, the Joint Chiefs of Staff chairman, further risked Trump's ire Thursday by declaring it had been “a mistake” for him to accompany Trump on a June 1 walk through Lafayette Square. The trip ended with the president holding up a Bible and posing for the news media outside St. John's Church, which was damaged by fire during the unrest.

Milley's comments amounted to an extraordinary expression of regret by Trump's chief military adviser, who said his appearance led to the perception of the military becoming embroiled in politics, which in his view — one shared by Esper — is a threat to democracy.

The events have stirred debate within the military and among retired officers. More than 500 West Point graduates from classes spanning six decades signed an open letter reminding the Class of 2020 of its commitment to avoid partisan politics.

The letter, published this week on Medium, also alluded to the problems Esper and Milley encountered at the White House after Floyd's death.

“Sadly, the government has threatened to use the Army in which you serve as a weapon against fellow Americans engaging in these legitimate protests,” they wrote. “Worse, military leaders, who took the same oath you take today, have participated in politically charged events. The principle of civilian control is central to the military profession. But that principle does not imply blind obedience.”

They added: “We are concerned that fellow graduates serving in senior-level, public positions are failing to uphold their oath of office and their commitment to duty, honor, country. Their actions threaten the credibility of an apolitical military.”

Esper did not attend. He told cadets in a video address that he knows their education and training “have prepared you to be strong leaders of character, confidence and courage. ... I expect you to remain committed to our core values — loyalty, duty, respect, selfless service, honor, integrity and personal courage. These principles will guide you in challenging times and in the face of new and emerging threats.”

Trump's appearance had been criticized as a political move that would put the graduates at risk in order to put Trump on a grand stage in a picturesque part of New York, the one remaining military service academy where he had yet to give a graduation address. Historic West Point is located 40 miles (65 kilometers) up the Hudson River from New York City, the epicenter of the U.S. coronavirus outbreak.

Army officials defended the move, saying the cadets would have had to brave the health risks of traveling back to campus anyway for their final medical checks, equipment and training.

The cadets had been home since spring break in early March, just before the coronavirus was declared a pandemic and Trump announced a national emergency. They returned to campus in late May.

A group called Veterans For Peace announced a protest outside West Point's main gate Saturday against what it called “Trump’s dangerous narcissistic Photo-Op Stunt at the West Point Graduation.”

The recently commissioned second lieutenants wore masks as they marched onto West Point’s parade field, instead of into Mitchie Stadium, the longtime commencement venue. They sat 6 feet (1.8 meters) apart, in keeping with federal guidelines to practice social distancing during the outbreak. They removed the masks when the ceremony began.

Instead of shaking hands with the president, graduates were to step up on a platform before the main dais and salute. Guests were not allowed; family and friends had to watch online.

The graduating class immediately underwent coronavirus testing when they returned to campus in late May. More than 15 class members who tested positive were isolated for two weeks before they were allowed to rejoin their classmates.