Rep. Steve Scalise, R-La., was shot, along with staffers near a baseball field in Alexandria. 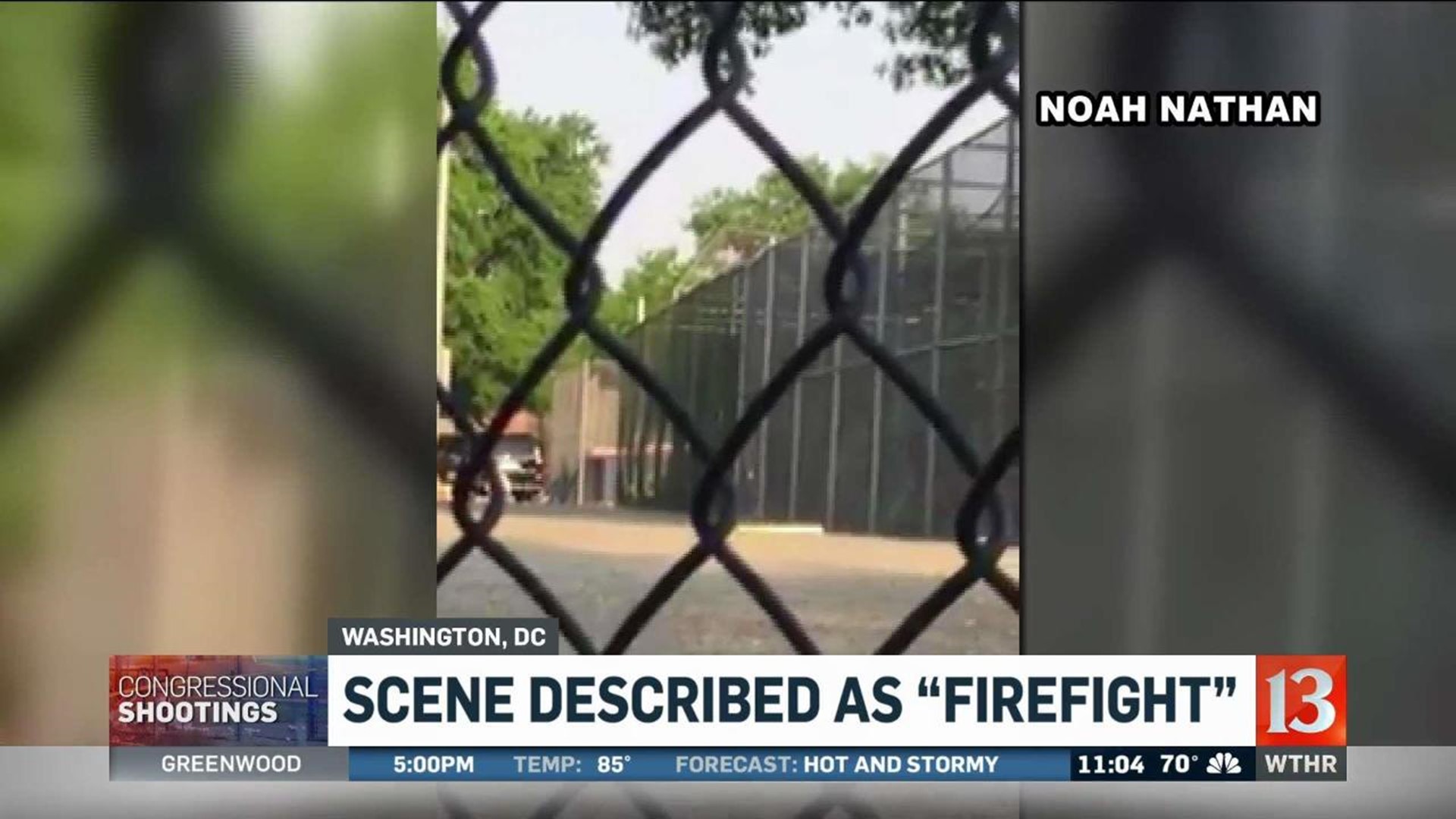 ALEXANDRIA, Va. (WTHR) - The suspect in Wednesday morning's shooting at an Alexandria, Virginia baseball field has died, and the congressman he shot is in critical condition after surgery.

Witnesses have told law enforcement that when the gunman arrived at the ball field around 7 a.m., he asked people "are these the Republicans or the Democrats" practicing, officials added.

The gunman hit four people, according to police. Those include Rep. Steve Scalise, R-La., Zachary Barth, who works on the staff of Rep. Roger Williams, R-Texas, lobbyist Matt Mika, and two U.S. Capitol Police officers. The FBI said in an update Wednesday afternoon that an unidentified congressman was also transported to the hospital to be treated for "secondary injuries."

Rep. Scalise was taken to MedStar Washington Hospital Center in Washington, D.C., where he was in stable condition when he was taken into surgery that morning. Just before 3 p.m., the hospital said he was out of surgery but is now listed as "critical."

Scalise was wounded in the hip. Late Wednesday, the hospital said Scalise remained in critical condition and would require more surgeries.

The hospital says he was shot in the left hip, after which "the bullet travelled across his pelvis, fracturing bones, injuring internal organs and causing severe bleeding."

The congressman was alert when he was transported to the hospital after the shooting.

"Prior to entering surgery, the Whip was in good spirits and spoke to his wife by phone," Scalise's office said in a statement. "He is grateful for the brave actions of U.S. Capitol Police, first responders, and colleagues."

Mika, director of government relations for Tyson Foods, was shot multiple times and remains in intensive care in critical condition.

The shooting happened at a baseball field in Alexandria, Virginia described as being immediately across the river from Washington, D.C.

"All of a sudden we heard a very loud shot. The gunman was over by the third base dugout with a clear view of the field," the Rep. Jeff Flake, R-Ariz., told CNN.

Scalise was fielding balls on second base when he was shot, Flake said. He said the congressman dragged himself 10 to 15 yards into the outfield to get further away from the gunman.

A witness described the gunman as a white, middle-aged man, and that there were 15-20 people at the field at the time.

Initial reports said that as many as 50 shots had been fired, but Flake said, "50 would be an understatement. He had a lot of ammo."

Another witness said she saw a law enforcement officer begin to shoot back at the gunman, so it's possible not all of those shots were directed toward those at the baseball field.

A photo of James T. Hodgkinson from his Facebook page. (Source: Facebook.com)

No word if that officer was a local officer, Capitol officer or Secret Service agent, but Sen. Rand Paul, R-Ky., told MSNBC that as a member of House leadership, Scalise would have had a security detail with him at the event. Had that detail not been there, "this could have been a massacre," he added.

Once the gunman was down, Flake ran to Scalise and tended to him. He said he grabbed Scalise's phone to call his wife.

"I just didn't want her to wake up and learn the news," Flake said.

The Alexandria Police chief announced at a press conference that the FBI would take the lead in the investigation since it included the shooting of a member of Congress, though local, state and Capitol police will continue to help.

Gov. Terry McAuliffe, D-Va., thanked Capitol Police for their work. He also said that neighbors and members of the community came out to help in an extraordinary show of support.

The suspected gunman has a criminal history that involved arrests for battery, resisting arrest and drunk driving. Senator Bernie Sanders said the man appears to have worked for his presidential campaign. Sanders said, "Violence of any kind is unacceptable in our society and I condemn this action in the strongest possible terms."

"We are united in our anguish," Speaker Paul Ryan, R-Wis., said on the floor of the House. "An attack on one of us is an attack on all of us."

Indiana's entire congressional delegation issued statements on social media expressing their concern for all the victims:

Reports that my former House colleague @SteveScalise has been shot and others injured as well. Praying for them and their families. https://t.co/w0jI7shHX1

(1/2) I am shocked & praying for the safety & recovery of my friend Steve Scalise & all the others shot, including the officers. -Joe

(2/2) I was practicing at the time with the Democratic team in DC and am okay. -Joe

Praying for my friend Steve Scalise and everyone at the practice this morning. https://t.co/s9usbZ1YYO

Many of those on the practice field today are my friends. @SteveScalise is a leader, a mentor and a good friend to me. pic.twitter.com/FwF2LEhp7o

My thoughts & prayers are with Majority Whip @SteveScalise, the @CapitolPolice, & staff who were affected by the horrific shooting today.

Praying for my friend @SteveScalise and everyone affected by this awful shooting, and grateful for the @CapitolPolice and first responders.

Prayers to my dear friend @SteveScalise &all injured after this morning's horrific shooting.Thinking of their families in this shocking time

Please join me in sending prayers for my friend @SteveScalise, @RepRWilliams staff, Capitol police, and all other victims & their families.

Praying for @SteveScalise, @CapitolPolice, & any staff injured this morning at the horrific shooting at the Congressional baseball practice.

My thoughts and prayers are with Capitol Police, my Congressional colleagues, staff members, and all impacted by this morning's shooting.

Karen & I are praying for @SteveScalise, the Capitol Police, & all hurt for a speedy recovery. Our hearts are with them & their loved ones.

My heart is with my former colleagues, their families & staff, and the US Capitol Police- public servants and heroes today and every day.

Members of Congress were practicing before an annual baseball game scheduled for Thursday night.

Leonard Crook said he was working out on the main floor of the YMCA, about 50 yards from the ball field, when a woman was frantically banging on the door of the facility, trying to get in.

"Some bullets hit the Y, so we went into the basement and everyone stayed there until everything blew over. We were locked down in the Y and not allowed to go anywhere," Crook said.

President Donald Trump released a statement after being briefed on the shooting.

"The Vice President and I are aware of the shooting incident in Virginia and are monitoring developments closely," he said. "We are deeply saddened by this tragedy. Our thoughts and prayers are with the members of Congress, their staffs, Capitol Police, first responders, and all others affected."

Trump later added, "Rep. Steve Scalise of Louisiana, a true friend and patriot, was badly injured but will fully recover. Our thoughts and prayers are with him."

The Capitol Police said, "out of an abundance of caution" they "deployed a robust police presence throughout the Capitol Complex," but all buildings remain open.

This is a developing situation. This story will be updated as new information becomes available.