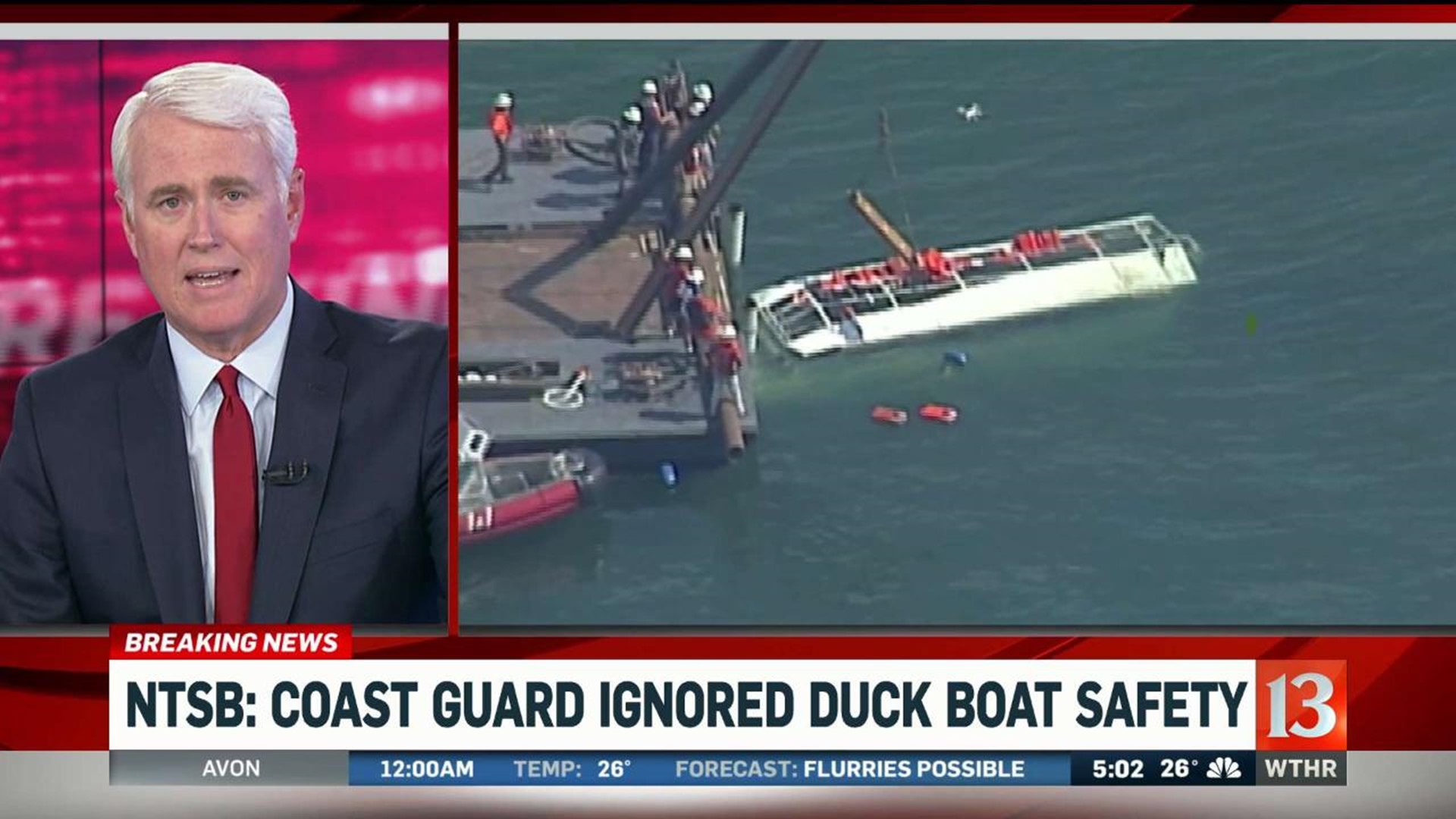 The National Transportation Safety Board released a “Safety Recommendation Report” on the July 2018 accident, when a Ride the Ducks of Branson boat known as Stretch Duck 7 sank during a severe storm. The boat’s captain and two company executives were indicted, and 30 lawsuits filed on behalf of victims’ families have been settled.

Former World War II amphibious vehicles known as duck boats operate around the country as tour boats. Many, like the one in Branson, begin with land tours before the vehicles goes onto water.

The NTSB says that since an Arkansas duck boat accident killed 13 people in 1999, it has repeatedly urged the Coast Guard to require the vehicles to be better able to remain afloat when flooded, and to remove impediments to escape such as canopies.

“Lives could have been saved, and the Stretch Duck 7 accident could have been prevented had previously issued safety recommendations been implemented,” NTSB Chairman Robert L. Sumwalt said in a statement.

“It is imperative that the United States Coast Guard adopt these life-saving recommendations now,” Sumwalt said.

Coast Guard Lt. Amy Midget said the Coast Guard issued guidance in 2000, after an NTSB recommendation, urging its inspectors and vessel owners to evaluate canopy design and installation and to “evaluate the design and installation of seats, deck rails, windshields, and windows as a system to ensure the overall arrangement did not restrict the ability of passengers to escape.”

A new review of amphibious vessel canopies is planned based on “the NTSB's reissuance” of recommendations, Midgett said.

The NTSB said duck boats’ low freeboard and open interior make them “vulnerable to rapid swamping and sinking” when they are suddenly flooded. In the Branson accident, a sudden storm caused massive waves that poured over the boat, sinking it within minutes.

“These safety issues were identified almost 20 years prior to the sinking of the Stretch Duck 7 and remain relevant to this accident,” the report said.

In May 1999, the Miss Majestic sank in Lake Hamilton near Hot Springs, Arkansas. Three children were among the 13 victims.

The NTSB said it also recommended the changes to 30 duck boat operators years ago, but just one made the recommended improvements.

The Missouri boat entered the lake as part of a land-and-water tour despite severe weather warnings. The dead included five children.

Tia Coleman of Indianapolis survived the accident but lost her husband and three young children — four of the nine victims from one extended family.

“The duck boat and Coast Guard’s failure to act on the NTSB’s recommendations to remove death trap canopies and improve the buoyancy of these boats killed my family,” Coleman said in a statement through her attorney.

Ripley Entertainment, owner of the Branson boats, has settled 30 of 31 lawsuits filed on behalf of victims of the accident, Ripley spokeswoman Suzanne Smagala-Potts said.

McKee faces several charges accusing him of failing to properly assess the weather and failing to tell passengers to don flotation devices as conditions worsened.

Lanham and Baltzell are charged with misconduct and neglect. Indictments alleged that Baltzell got onto the duck boat before it departed and directed McKee to conduct the water portion of the excursion before the land tour because of the approaching storm. At no point after that did Baltzell or Lanham communicate with McKee about the growing intensity of the storm, including that wind gusts of 70 mph were predicted, the indictment said.

The indictment accused Lanham of helping to create "a work atmosphere on Stretch Duck 7 and other duck boats where the concern for profit overshadowed the concern for safety."