Dozens of cars piled up in Virginia highway crash

Fire responders are on the scene of an accident involving more than 60 vehicles on a Virginia highway. 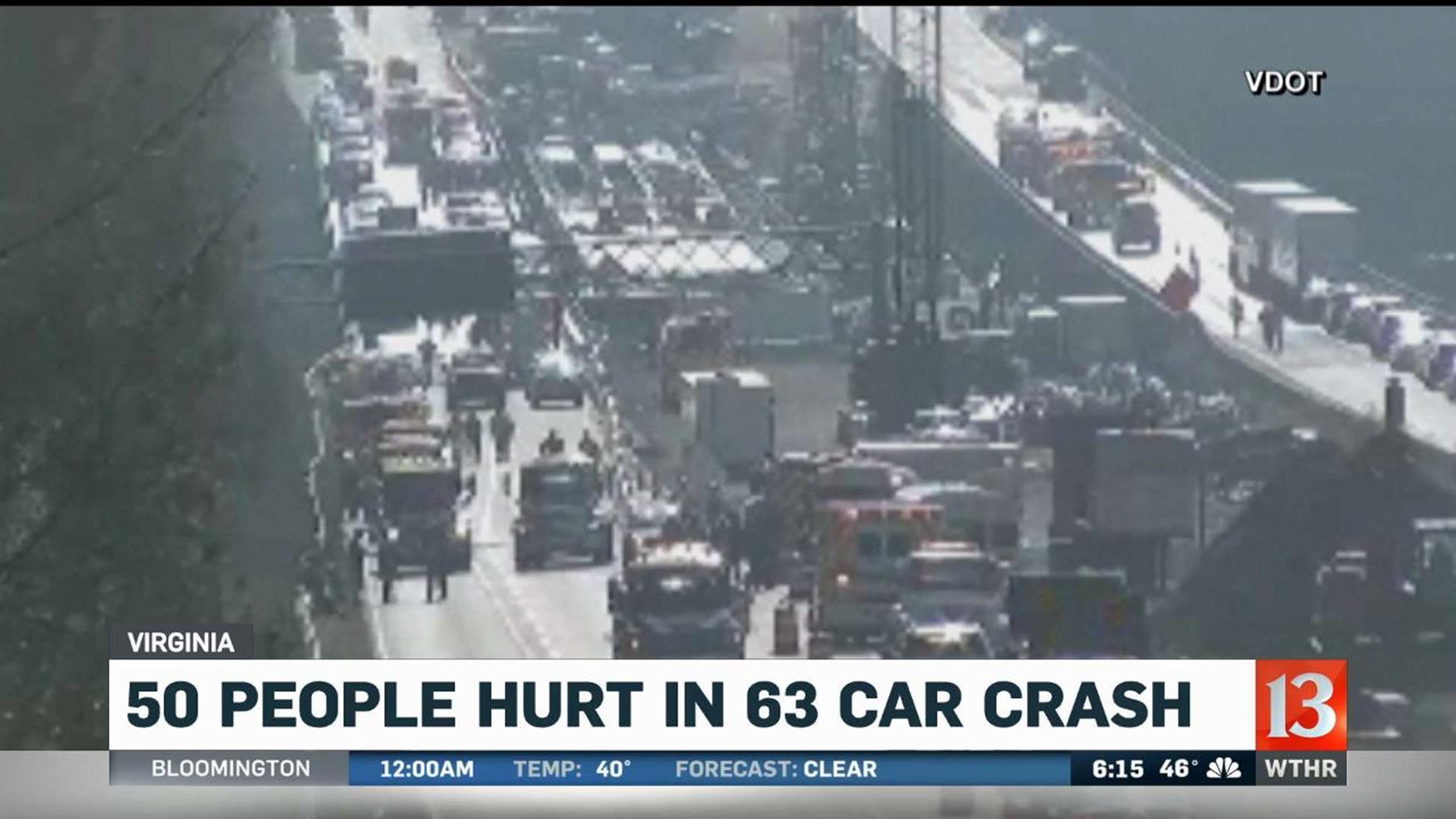 WILLIAMSBURG, Va. (AP) — A pileup involving more than 60 cars on a major interstate in Virginia on Sunday morning injured dozens of people, according to state police.

The crash happened just before 8 a.m. Sunday on westbound Interstate 64 in York County near Williamsburg, Virginia State Police Sgt. Michelle Anaya said. No fatalities were reported, but it took crews several hours to clear the roadway and reopen all lanes of traffic.

Authorities do not yet know the cause of the crash, but fog and icy road conditions were contributing factors, Anaya said.

Photos from the scene showed a tangled mass of metal, with car hoods crumpled, windows smashed and a red truck plopped on top of another vehicle.

Ivan Levy said he and his wife were both headed to Williamsburg, where they work, in separate vehicles around the time of the crash.

Levy told The Associated Press he started slowing his truck down and turned his hazard lights on when he saw thick fog.

“Next thing I know I see cars just start piling up on top of each other," he said.

Levy was able to stop in time but then got a call from his wife saying she had been in the wreck.

“It was just so scary,” said Alena Levy, who was evaluated at a hospital but was not seriously injured.

Ivan Levy said he ran past cars to find his wife and help her out. They made their way back to his truck, and Ivan Levy said he then grabbed a medical kit and started checking on other victims because first responders hadn't arrived yet.

Sixty-nine vehicles were involved in the crash, and 51 people were treated or transported to hospitals, Anaya said Sunday afternoon, noting that those figures were constantly changing.

Among those hurt, two were listed in critical condition and 11 were serious but not life-threatening, said York County Fire Chief Stephen Kopczynski.

An investigation into the cause of the crash was ongoing.

In a separate incident, eight cars were involved in a crash on I-64 in the opposite direction after the larger pileup, Anaya said. It wasn't immediately clear if others were injured in that crash.

Ivan Levy said the car his wife had been driving was a Christmas gift.

“She was all upset about the vehicle, and I was like, ‘Look, honey, it’s just metal,’” he said.