It happened after a demonstration over an incident where a man was threatened Saturday at Lake Monroe. 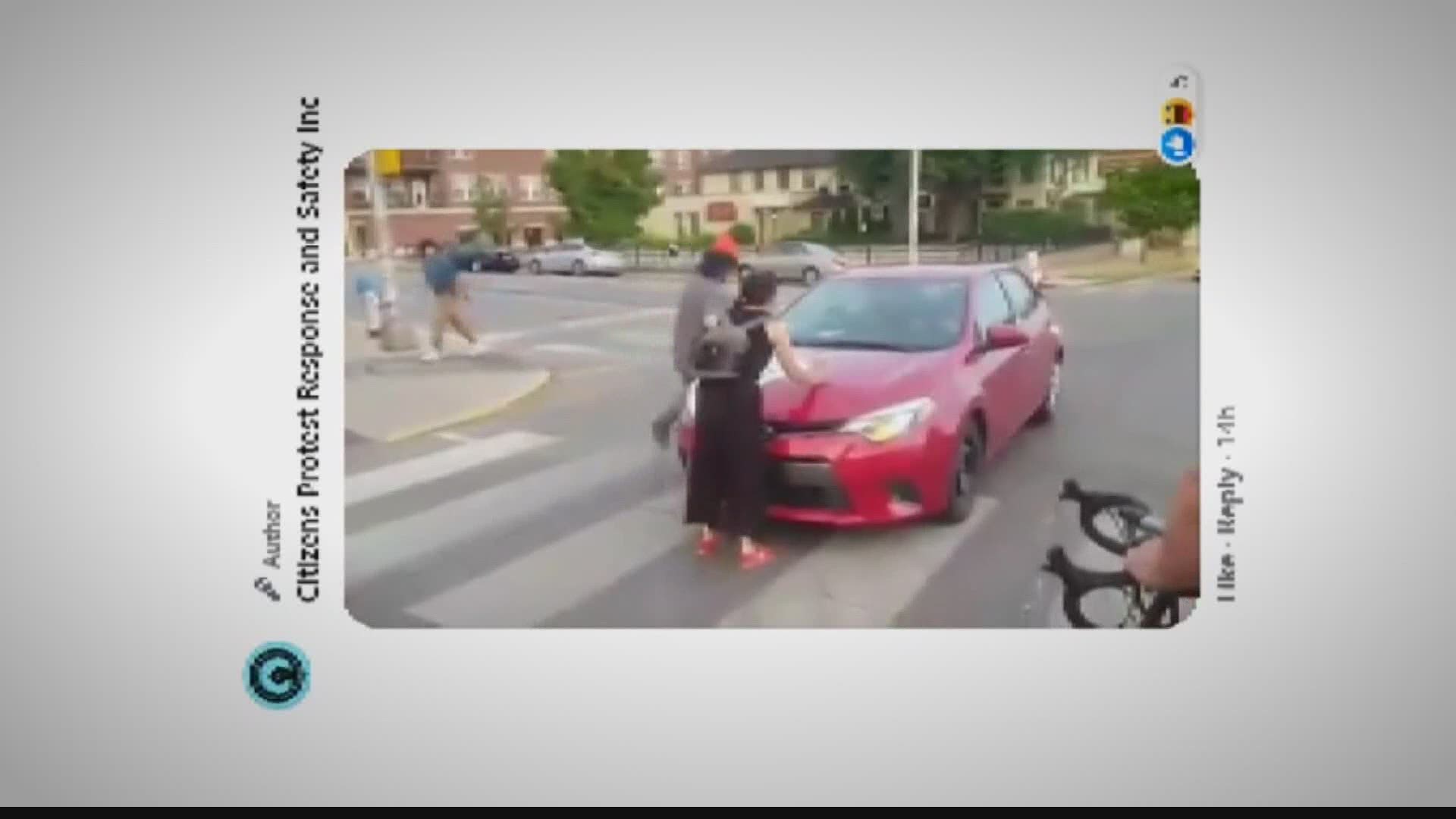 BLOOMINGTON, Ind. — Bloomington police have launched a criminal investigation into a car that sped through protesters Monday night and have released images to try to locate the vehicle and alleged suspects.

After protests calling for arrests in a violent weekend confrontation at Lake Monroe, witnesses told 13News a car drove into a demonstrator on Monday.

A warning, the video is hard to watch.

You can see a car speeding through with a woman still hanging on the hood.

Allen Kenny, heard the commotion and couldn’t believe what he saw.

“It was grotesque,” Kenny said. "Disgusting that some would do that. I feel outraged for my community, for my life and people around me and my America."

Rodney Root took the video. He said he and his wife were leaving the protest when they saw a car trying to get through the intersection of 4th and Walnut.

"The car just speeds right into her," Root said. "She goes up on the hood and a guy is close by. You can see it in the video shortly, a guy tries to stop it, and he's holding on. I'm not sure how long he stayed on the car, but the car went full speed."

They said a passenger in the red Toyota got out and threw someone's scooter that had been left in the roadway.

According to Bloomington police, a 29-year-old woman tried to intervene, walking in front of the car and putting her hands on the hood. The driver of the car then accelerated, with the woman ending up on the hood of the car. A 35-year-old man grabbed onto the side of the car as it pulled away.

"You see a human in front of the car, but this person just hit the gas as hard as they could and they kept going, and then they tried to throw people off the car at high speeds. It didn't make any sense. I've never been that infuriated in my life. Like I was mad," witness Erin Parks said.

Norton, an IU student who also reports for the campus news outlet, Indiana Daily Student, said the incident happened at the end of the protest.

"The protest concluded and began to disperse from the announcement of an organizer, and I was speaking with someone on the sidewalk of the courthouse next to Kirkwood. I heard yelling behind me and saw a red car moving incredibly fast with people on the hood heading north on Kirkwood," Norton told 13News.

Norton interviewed a protester who was close enough to see the driver.

“It was intentional. That had to be intentional," Norton said. “What I heard from someone that was on the car itself is she in fact did mouth 'I’m going to run them over.'”

Both the 35-year-old man and 29-year-old woman fell from the car when it turned quickly on 6th Street. Police said the woman, Chaz Mottinger, was said to have been knocked unconscious and suffered a laceration to her head. She was taken to the hospital for treatment. The man had scrapes to his arms.

Mottinger told 13News she has a concussion, two staples holding her scalp together and a swollen ankle.

“I wanted to stop other people from getting hurt,” Mottinger said. “I didn’t think another human being would try to run me over.”

Police did review cellphone video of the incident. They're now working to locate the car and the female driver and male passenger.

Tuesday, Bloomington PD released images of the vehicle and the individuals believed to be involved.

Bystanders got the license plate number of the vehicle. Police say the car’s registration led detectives to an invalid address.

Leaving the scene of an accident causing serious injuries is a felony crime.

Anyone with information about their identify or whereabouts is being asked to contact Bloomington PD at 812-339-4477.