A father in Whiteland is being called a hero by his neighbors after saving his family from their burning home. 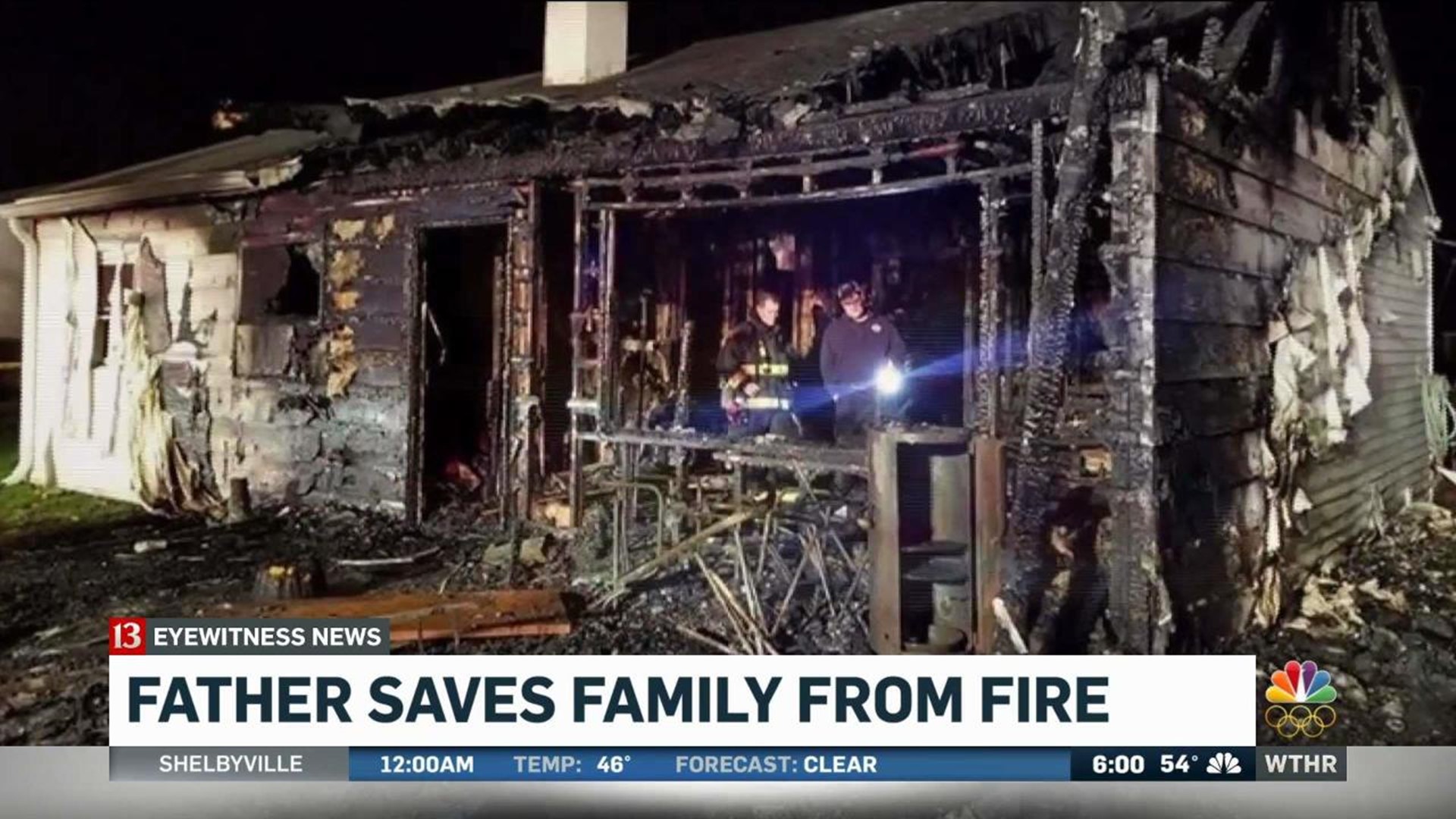 WHITELAND, Ind. (WTHR) - A father in Whiteland is being called a hero by his neighbors after saving his family from their burning home.

The Wright family lost the house they rented, some of their Christmas gifts and all basic necessities.

But thanks to his wife hearing their smoke alarm, Aaron Wright was able to rescue his young daughters.

They all made it out alive.

Monday afternoon, 9-year-old Akili and 2-year-old Nadilyn Wright chased each other outside a hotel in Greenwood, tossing a teddy bear around.

But the girls were dressed in borrowed clothing.

And that teddy bear?

It's a gift from a firefighter who battled a fire that destroyed their home on Ardmoor Drive.

Around 4:00 a.m. Saturday, mom heard the smoke alarm through the baby monitor.

"I woke up screaming the house is on fire," Elizabeth Wright said. "Those smoke detectors, if they hadn't had been there I don't know if we'd woke up to get out. My husband, he opened the door in front of me and we both fell back. He shut the door and was screaming we have to go get them out."

He was talking about their daughters, asleep in their now-charred bedrooms.

Aaron Wright ran through the smoke and fire and grabbed his girls from those rooms, one by one.

He got them to a window, where he and his wife got them out to safety.

"Nadilyn was holding onto the window. She didn't want to go out. She didn't understand what was happening. She thought she was falling and I'm just pushing as hard as I can to get her out of that window," Elizabeth Wright recalled. "He got us out and then dove out after us."

With all four family members safe, dad ran down the street, knocking on doors to wake up neighbors in case the fire spread.

"He was completely covered in soot," neighbor Aaron Hardy said, "from when he was running thru the house, snatching up his kids."

No one was hurt.

But the family lost their home, basic necessities, even some Christmas gifts for the girls they'd just bought on Black Friday.

"It's pretty rough going home and seeing all the kids' stuff burned up and most of the stuff is gone," Wright said.

Now fire investigators in Whiteland and Greenwood are looking into what caused the fire.

But firefighters say it'll take a couple of weeks to pinpoint an exact cause and point of origin.

Family and neighbors fear natural gas may have somehow contributed to the fire.

They say they reported a gas leak here weeks ago.

"My husband had reported a gas leak to Vectren. It was out by the road in our yard," Wright said, "and they said that it wasn't a problem and they'd come and fix it eventually."

"You can clearly smell it, can't mistake it. It's there," Hardy said. "We've all been real nervous about that. We called. The smiths did and then the Risingers and we all did. We all called. I think that's why he (Aaron Wright) took that brief moment to wake everybody up Saturday, because of that gas leak."

Vectren told Eyewitness News it did respond to the fire Saturday at the request of the fire department, but it's still checking into those reports from neighbors about a possible gas leak.

Meanwhile, the Wright family is thankful.

Even with so much loss, they survived because of working smoke alarms and a dedicated dad.

As fire investigators work to determine a cause to this fire, family and friends are working to help the Wrights recover. A GoFundMe site has been set up for donations.

They're collecting clothing and basic necessities at the Anytime Fitness at 1642 Olive Branch Parke Land in Greenwood. Elizabeth Wright also wanted to share a message of gratitude for those who've already helped them in the few days following the fire:

"Our family wants to say thank you so much for all the people in this community that have supported us. We have had so much support from everyone and this is just amazing to me. We greatly appreciate it. Thank you."