A service dog reported stolen from a U.S. Marine Corps veteran has been found on the southeast side of Indianapolis. 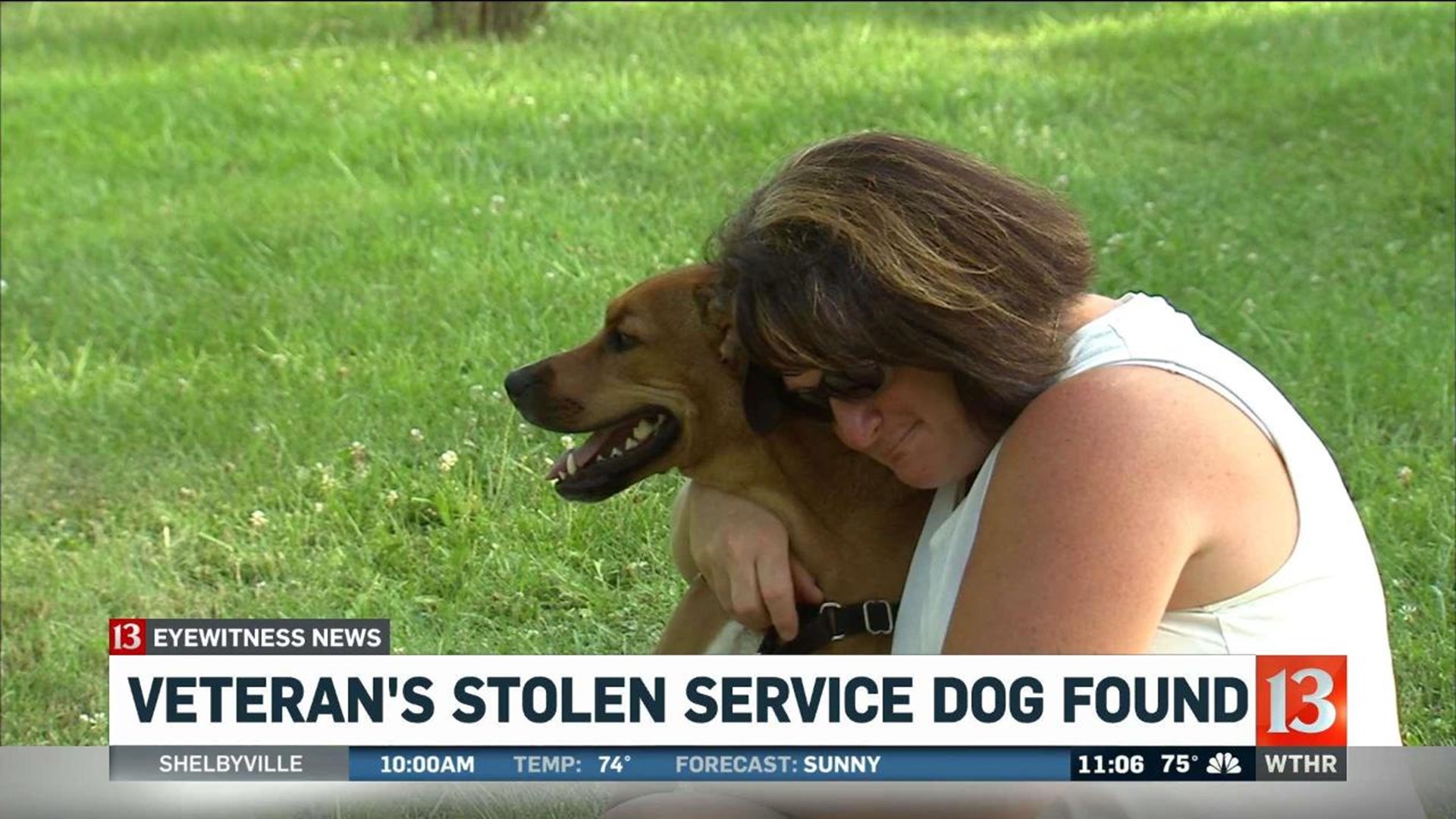 INDIANAPOLIS (WTHR) — A service dog reported stolen from a U.S. Marine Corps veteran has been found on the southeast side of Indianapolis.

Metro police and the community had been searching for Wrigley since he was reported missing. The dog had been in Lana and Tim Whitner's SUV when it was stolen from a southwest Indianapolis truck stop.

After searching for hours with no luck, Wrigley's owners tried a different tactic. They laid out one of their shirts in an area where Wrigley had been spotted and he ended up tracking them down.

"Wrigley" was reunited with his family Wednesday afternoon on the southeast side. (Photo: IMPD)

"His nose is obviously amazing. He found the shirt and wasn't going to give it up, so he's pretty good at what he does and I needed him, I needed him, and I didn't think I was going to get him back," Lana Whitner said.

His family spoke with Eyewitness News about their loss and the search Tuesday evening.

"I miss him and I need him. So if you have him or you've seen him, I need him back," said U.S. Marine Corps veteran Lana Whitner about her 2 1/2-year-old dog named Wrigley.

The Whitners planned on getting some rest in Indianapolis Wednesday night before heading back on their way.

#IMPDNOW: Wrigley has been found! The service pup was just reunited with his @USMC Veteran Owner and family. Thank you to all who assisted! #Reunited #YourPoliceYourCommunity #1ndy pic.twitter.com/xy006xJsLs

Tuesday night, Lana said she felt lost without the Rhodesian Ridgeback mix, who has been her service dog for the past two years.

Most importantly, Wrigley senses when Lana is about to have a seizure or debilitating migraine.

"He'll let me know, 'Look, there's something getting ready to happen' and I know that, so I depend on him," Lana explained.

Lana and her family could have never been ready, though, for what happened to Wrigley at a the Flying J Truck Stop on West Thompson Road on the south side Tuesday afternoon.

"He was in the 4Runner when we stopped to get gas and somebody decided to jack the (Toyota) 4Runner," Lana said, explaining a man stole the family's SUV while her husband was gassing up their U-Haul and Lana went inside the truck stop to use the restroom.

The Whitners were just passing through Indianapolis, heading south, after moving from Illinois.

"We were just trying to get down to Florida to start our dream that we had been planning for years and this happened," said Tim Whitner.

Tim says he heard the SUV's engine start up and looked up to see a man driving away in it.

"It was going 45 miles per hour through the parking lot and into oncoming traffic," Tim remembered, explaining it headed toward Interstate 465 with Wrigley in the backseat.

"I just couldn't catch him. He was just too fast, so I tried to run," said Tim.

Not long after, another officer spotted the Whitners' SUV at a nearby Walgreen's on North Arlington Avenue, but Wrigley wasn't there.

"It's the worst thing that could possibly happen to us," said Tim.

According to the couple, the suspect and two others came out of the store and were headed toward the SUV, when they saw police and took off running.

The Whitners say police caught two of them, but the suspect got away and with him, any answers about their beloved Wrigley.

"The only person that knows what happened to him is the guy that still's still out there," said Lana.

So until the Whitners find Wrigley, they're staying put in Indianapolis. They're not leaving him behind.

"I don't have any idea what I'm going to do without him," said Lana.

The Whitners say Wrigley is microchipped. They had offered a $500 reward for his safe return.