A 911 call about a violent armed robbery has resulted in the most unusual friendship that not even the two men involved expected to happen. 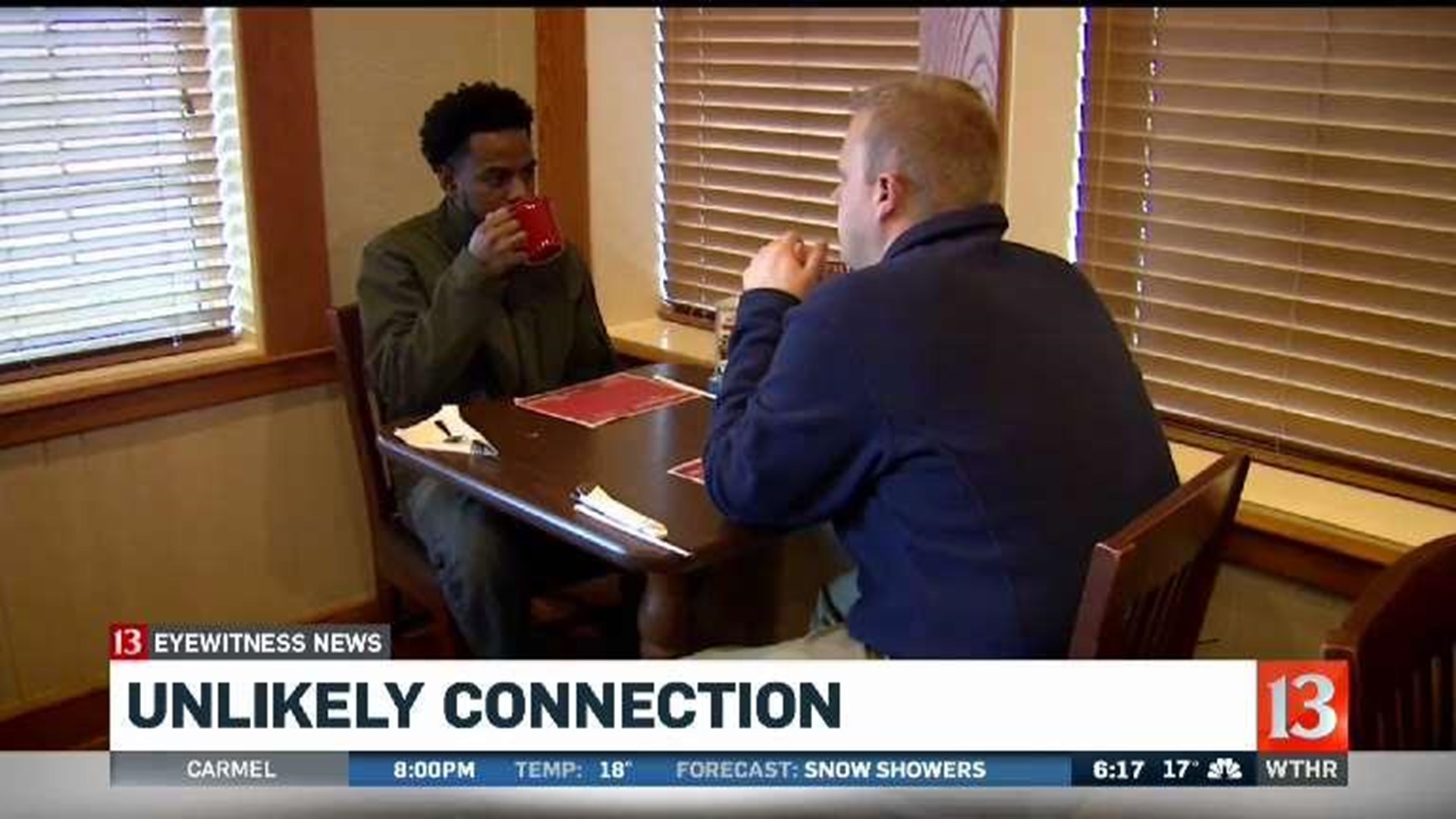 AVON, Ind. (WTHR) - A 911 call about a violent armed robbery has resulted in the most unusual friendship that not even the two men involved expected to happen.

That's because the two friends had nothing in common.

Brian Nugent has worked his way up the ranks to assistant chief at the Avon Police Department. This story explains how he met 17-year-old Rameil Pitamber.

The two now sit down together for a cup of coffee quite often to chat about life. They have a bond that no one would have ever predicted.

In a recent chat over coffee at the Bob Evans restaurant on U.S. 36 in Avon, Pitamber shared with Nugent a conversation he had about cutting ties with one of his friends.

"This is serious," Pitamber said. "You think this is about me when it's about you. We are humble. We don't have time to be arrogant."

"It's a dog eat dog world out there. You know better than I do," said Chief Nugent.

Their conversations over coffee are surprising, since they're from completely two different worlds.

In January 2013, surveillance video showed Rameil, then just 17 years old, posing as a Little Ceasars customer. He used a gun to demand money and order the employees to the floor. Rameil also ordered employees to tie each other up during the robbery and forced them into a restroom. He ended up taking a little more than $600 from the restaurant.

During the getaway, he made a huge mistake with his cell phone.

"I realized I must have dropped it when I walked out the back door," Pitamber said.

"That cell phone was located behind the business as the suspect fled the scene," said Nugent.

Nugent, an Avon police detective at the time, learned from the call log that a Little Ceasars employee was in on the whole thing. A court-ordered search warrant uncovered a lot of detailed information about the planning of the robbery, too.

"That information brought us to Rameil," said Nugent.

Within hours, Detective Nugent obtained an arrest warrant for Rameil and showed up at his home in Avon. Rameil had already talked his grandmother into being his alibi. But eventually he realized the evidence stacked against him was not only strong, but would also put his grandmother in serious trouble, too.

The 17-year-old faced charges as an adult and eventually struck a plea deal with the Hendricks County prosecutor to confess to the robbery and do 11 years in prison.

"Prison was hard, it was very hard," said Pitamber, who admitted he cried in jail. "Yes, I cried, because even after I confessed, I thought I was going to get house arrest."

Instead, he served his time at the Putnamville Correctional Facility.

While he was in prison and unbeknownst to Rameil, his mother never failed to send Nugent an email to say, "Merry Christmas," ask about his family and just to send a greeting on other occasions.

In prison, Pitamber did everything he could to stay out of trouble and to be a model inmate. His good behavior paid off.

"With time cuts and good behavior, I think I did four years," he said.

Rameil met regularly with his parole officers up until December 20, 2018.

IMPD Det. Jamin Davis is one of the officers assigned to manage probation time for convicts out on good behavior. He oversees the Impact Program.

"The younger you are, the higher the chances of you going back to prison, unfortunately, so it's been refreshing to see somebody come out with their eye on the prize," Davis said.

“...it's been refreshing to see somebody come out with their eye on the prize.”

One of Rameil's prizes is the job he landed at an Avon Goodwill store after prison. One day, in plain clothes, Nugent walked in to make a donation.

"I finally just go up and asked him, 'Hey, do you remember me?' and he said, 'Yes'," Pitamber said. "I gave him a hug and we reconnected from there and I asked him to be my mentor."

"When someone comes to you and they recognize that and they ask for help, you help them," Nugent said.

Pitamber has now rebuilt his life much like he's rebuilding a house on Indy's near-northwest side. Just like always, his success is driven by his mentor's advice.

When it came time for Rameil to try to obtain a driver's license, Nugent came through for his mentee: he taught Rameil how to parallel park.

Brian and Rameil know their friendship is just not something you see every day.

"He knows when to be a big brother and hold me accountable as a father figure," Pitamber said.

Rameil's dream now is to own his own HVAC company. He believes with the help of mentor Chief Brian Nugent, who gives him great advice, that dream will come true one day. Rameil also wants to help others who have gotten on the wrong track turn their lives around and start making better choices like he has learned to do.