The cost of impact sports: The risk one mom wasn't willing to take

Roxie Crawford made the decision to pull her son from football after researching CTE, a degenerative brain condition associated with repeated blows to the head. 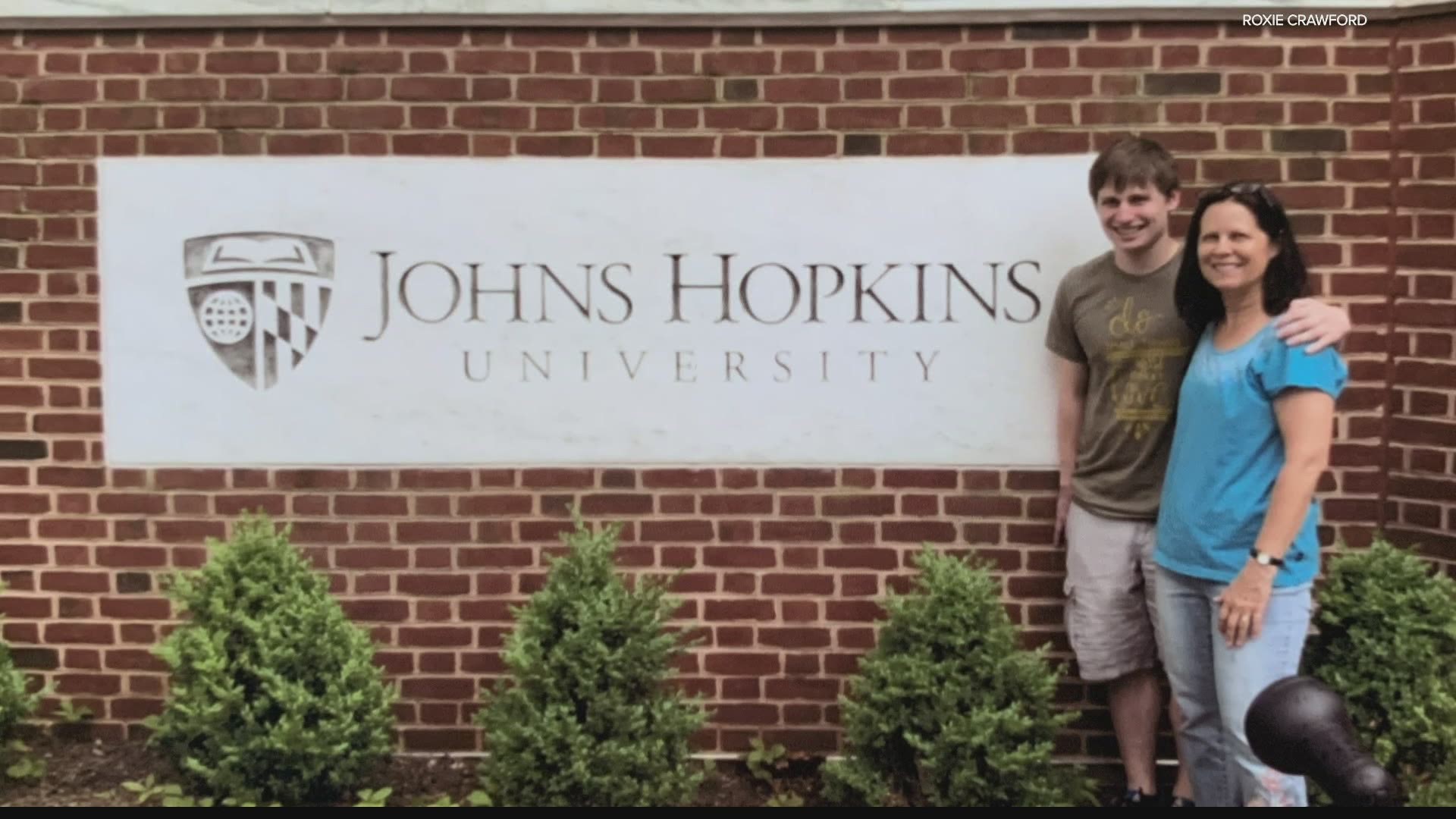 INDIANAPOLIS — Roxie Crawford grew up in a football family. Her grandfather played in the pros. Her father played at IU and her son Johnny was a star for the Shamrocks in Westfield. Her husband helped coach Johhny's team.

In many ways, the Crawfords were all in. Despite that legacy, in time Crawford learned she was willing to break connections the game offered to protect her son's future.

Johnny was 10 years old when he started playing tackle football in grade school.

"He was very good, a very good athlete," Roxie said.

And he was a member of a team. The players were his friends, practices determined his schedule, being an athlete, a football player was Johnny's identity. He remembers the mindset.

"Thirteen-year-old kids who wanted to win. We didn't know,” he said.

The first injury Roxie remembers is a concussion, Johnny was in the eighth grade. It scared her. Simultaneously, she was getting an intimate look at the challenges of trying to relate to a person with a brain that misfires. Her mom was living with Alzheimer's and Roxie was a primary caregiver. She remembers the frustration of watching the person she loved, slowly fade away.

Roxie was also getting a close look at the tackles on the field. She volunteered as the football team's photographer. As the kids got older, she witnessed the hits getting harder. She decided to educate herself.

Credit: Ann McKee, MD, Boston University
The image on the left shows the brain that hasn't been impacted by the protein that causes CTE. The brain image on the right shows a darkened image with that protein.

CTE is short for chronic traumatic encephalopathy, a degenerative brain condition associated with repeated blows to the head. It is also associated with the development of dementia.

The repeated trauma over time triggers an accumulation of a protein called tau.

But the actual disease can’t be diagnosed until after death. Symptoms commonly develop in patients in their 40s and 50s but can present as early as 20s.

In a groundbreaking LEGEND study Boston University researchers quantify that each year of playing tackle football increases the odds of developing CTE by 30 percent and that risk doubles for every 2.6 years of play as reported in Annals of Neurology.

You can calculate your risk here:

The study was published in 2019, but even in 2013 Roxie learned enough online about head injuries to cause concern.

RELATED: What is CTE and how does football increase the risk?

The tipping point came during Johnny's sophomore year. He was sidelined with a hip injury.

"We all agreed that he would rest for two weeks, and then they decided to play him," Roxie said.

Seeing her injured son suited up to play was too much for her. She made a sideline decision to pull Johnny from the game and the team.

It stripped the Shamrocks of a star player mid-season.

"I lost some friends," Roxie said.

Roxie said the public backlash was intense and her family relationships were tested.

"I thought, this would be something that would be held against me forever. Mean ol’ Mom, I'm the one that pulled {my} son from football, you know who does that? I did," Roxie said. "It was very hard. I had some people tell me I need to stay out of my son's football and the coaches and the trainer's take care of it. Stay out of his football, all the way to I was in the dark. I didn't know what I was talking about.”

She felt isolated. But then her Dad, Bob Peake, reached out.

"He said, ‘what are you doing?’ I said ‘well, dad. I know you're not gonna like this, but I read about it. And I don't want to him to play anymore, I can't, I can't condone it.’ And so he read all the information I was reading. And he said, ‘you know what? I support you. I think it's the best thing you could have done. I think I have it.’" Roxie said.

Peake was so convinced, her dad signed up to donate his brain to CTE researchers at Boston University. Roxie remembers the call from a LEGEND study physician later after his death.

"She said that he was in stage three of four of CTE. And I was actually shocked." Roxie said.

She was also relieved and grateful she limited Johnny's risk.

"You can't get a new brain you can't fix the brain,” she said. “Why gamble with it? It's not worth it. I saw my mom losing her brain, it's horrible, it's not the person you know.”

After leaving football, Johnny focused on using his speed to help the track team. He had more time to study and academically he went from fourth to first in his class. He went on to graduate from MIT in three years.

"I think about it a lot. I think I'm grateful that she pointed it out and then I stopped playing," Johnny said.

He now is engaged to a high school sweetheart and he is a PhD candidate at Johns Hopkins.

"After I stopped playing football, I was like, 'this is just weird.' And then you realize that life goes on, and it's like a bunch of doors open for you, very suddenly," he said.

"I'm just glad that he can carry that through and do what he was designed to do and he's doing research using his brain. Fully," Roxie said. "Isn't that what parents, parenting is about is preparing your kids for the future and the future generations? Your kids are worth it. Trust your convictions. Life is hard, and put your kids first."