Towns like Lapel and Pittsboro paid more than 70 times the normal price to refill their natural gas reserves during the winter storm that gripped much of the nation. 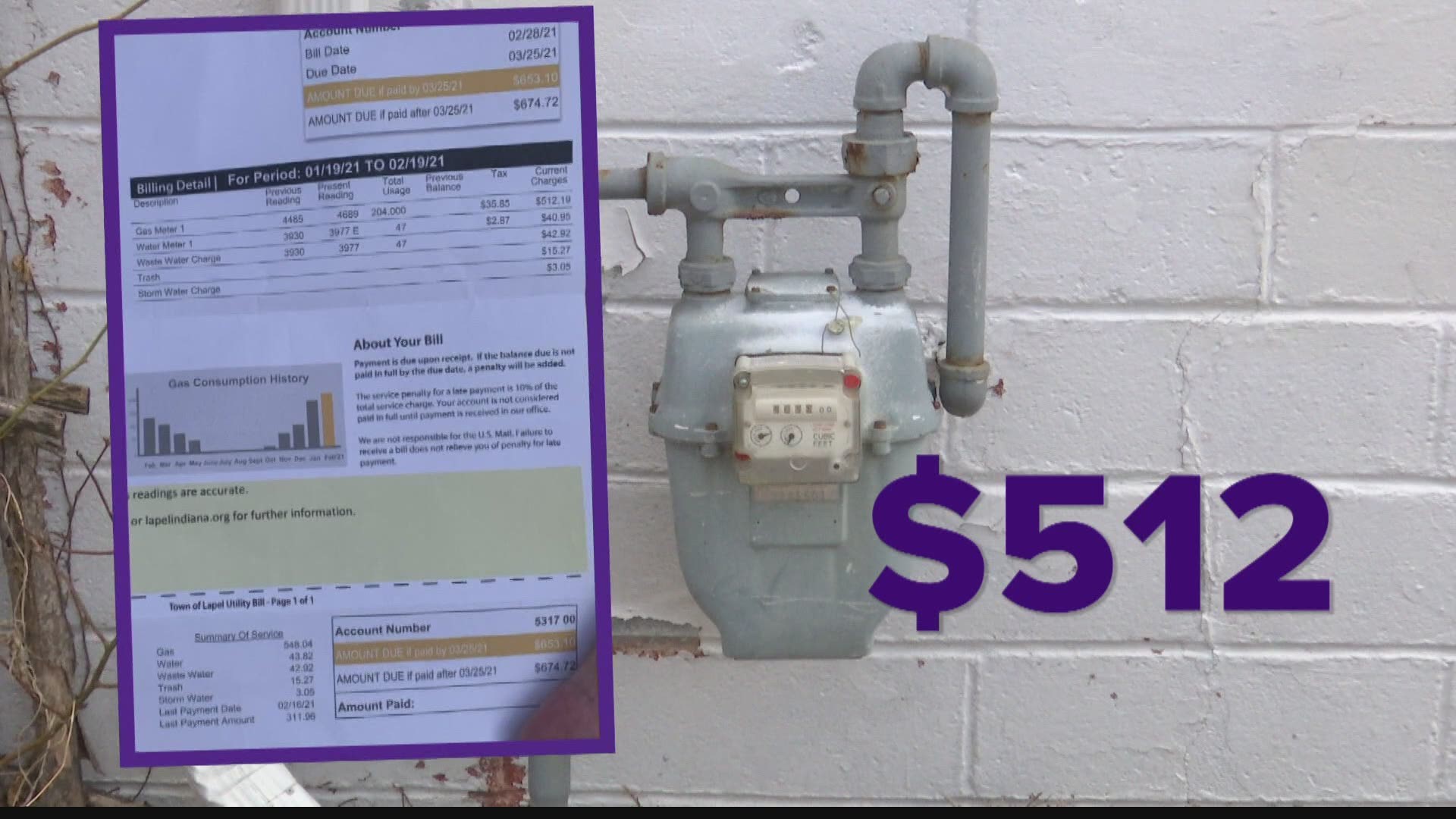 LAPEL, Ind. — Lapel is a one-flashing-stoplight town in Madison County with about 2,400 residents.

"It's just great because you have such a small community and it feels safe,” said Melissa Poore.

What's not great is the $512.18 gas bill Melissa Poore received for last month, about three times what she normally expects in the coldest part of the winter.

"I don't ever want this to happen again,” said Poore. “I really feel bad. I've been able to continue to work a little with the COVID situation. I know there's a lot of individuals that are unable to, and on fixed incomes and such that this is detrimental."

When Lapel’s pre-purchased supply of natural gas ran out in February, the town had to pay a lot more than it expected to get more at market price. From a Feb. 9 price of $3.52 per unit, the cost of natural gas on the Panhandle Eastern Pipeline jumped to $224.56 per unit just four days later.

The price remained at that level for four days, as the polar vortex swept deep into the south and put Texas in a deep freeze that skyrocketed natural gas prices.

Small towns in the Midwest that operate their own utilities paid dearly.

Credit: WTHR
The Town of Lapel's pre-purchased supply of natural gas ran out in February, right as the coldest weather of the year settled in.

Lapel's gas bill hit $500,000 for February, $200,000 more than budgeted for the entire winter. The cost was passed on directly to residents, who have been given nine months interest-free to pay off the one-month spike.

"When you get from one month to the next and you're five times the amount of your normal bill, there's a pretty good percentage people in this town that are on fixed income that don't budget for that and I was fortunate enough to have the resources to get this taken care of,” said Lapel resident Kent Hiatt. “But many don't."

The town of Pittsboro in Hendricks County paid $600,000 for gas in February, 10 times the normal bill for that month. The town used reserves to pay off $400,000. Residents will see increased bills over the next 12-14 months to pay off a $200,000 loan covering the rest of the bill. A typical two-story house will see an increase of $40-60 a month in their gas bill.

Both small towns asked their businesses and residents to lower thermostats and conserve gas in the days before the price spike. Both towns are now looking for help from the state or federal government and utility regulators for what they view as price gouging.

"We want to make sure that something is addressed about this,” said Pittsboro Town Council President Jarod Baker, “and knowing that other towns within Indiana, like a Lapel, have concerns as well - all of us making sure our voices are heard."

"We are committed to offering deferred payment plans and other billing solutions to our commercial and industrial gas customers who have been impacted by the extreme energy prices resulting from February’s historic cold weather event. Constellation also works closely with each of the local utilities where it serves customers – including in the areas most affected by the winter storm. We are engaged in discussions around additional measures that can be taken to mitigate customer impacts."

The price of natural gas dropped under $3.00 per unit by the end of February.

Bainbridge and Roachdale are two other small Indiana towns on the pipeline impacted by the gas price spike last month.