Russ Trotter survived a house fire as a kid. Now, he saves people from them as an Indianapolis firefighter 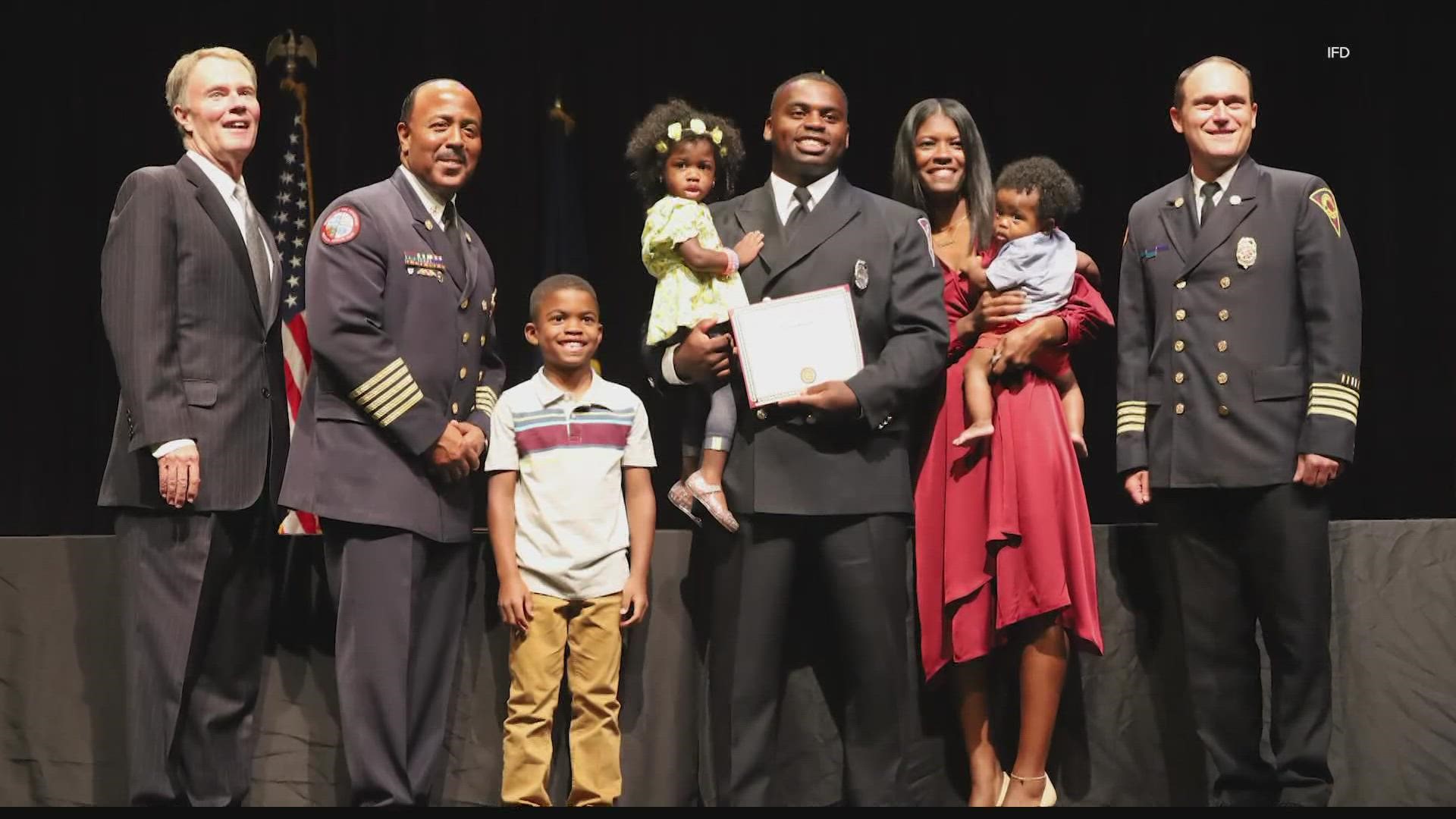 INDIANAPOLIS — A new class of recruits for the Indianapolis Fire Department got their badges Tuesday night. They all hit the streets for their first shifts as probationary firefighters on Wednesday.

One of them is also a house fire survivor.

At IFD Station 15, it's the first day on the job for Russ Trotter. He's the only "new guy" on the crew here.

"It's a great group of guys in there. They've kind of joked around a little bit, but that's life in the firehouse," Trotter said with a laugh.

He's one of 54 IFD recruits sworn in Tuesday night, after seven months of grueling training.

"When we went on stage, my son was able to pin me. My other two children were there. My wife was there as well. I think it really hit me once I put my coat and bucket pants on when the tones went off today," Trotter said.

On the first morning of gear check, Trotter not only prepared to go out on fire runs, but also reflected on what crystalized his career choice.

The Arsenal Tech and Indiana University graduate went from sales to construction to firefighter, so he could help people in need.

"I've always had a passion to help others," Trotter said, "especially on their worst day."

Because he's had that worst day.

"I have. When I was 7 years old, my house caught on fire," Trotter explained. "I've never seen that much fire at once. And so...I knew it was a bad situation."

Trotter said his sister had been playing with fire and despite his dad's efforts with a fire extinguisher, the flames eventually took their entire home.

But Trotter, then just a first-grader, watched the firefighters work.

And those heroes stuck with him.

"I just remember seeing everyone in the big uniforms...the helmets," Trotter said. "We all got out of the house safely and the fire department came and did their job and although we lost everything, we didn't lose each other."

Now, with his crew at IFD, Trotter hopes to be the hero for other families, for perhaps another young person, in need of help on their worst day.

"I can let him know everything is going to be OK, and if he did suffer a tragic loss, then know that 'Hey there's always a tomorrow and you can be the change-maker that people look to,'" Trotter said.

Tuesday's graduation ceremony brings the total number of firefighters on IFD to 1,208.

IFD Recruit Class 87 is set to be sworn in, in October.

To learn more about becoming a firefighter, click here.