Among the issues cited in the report are a lack of planning, coordination and communication. 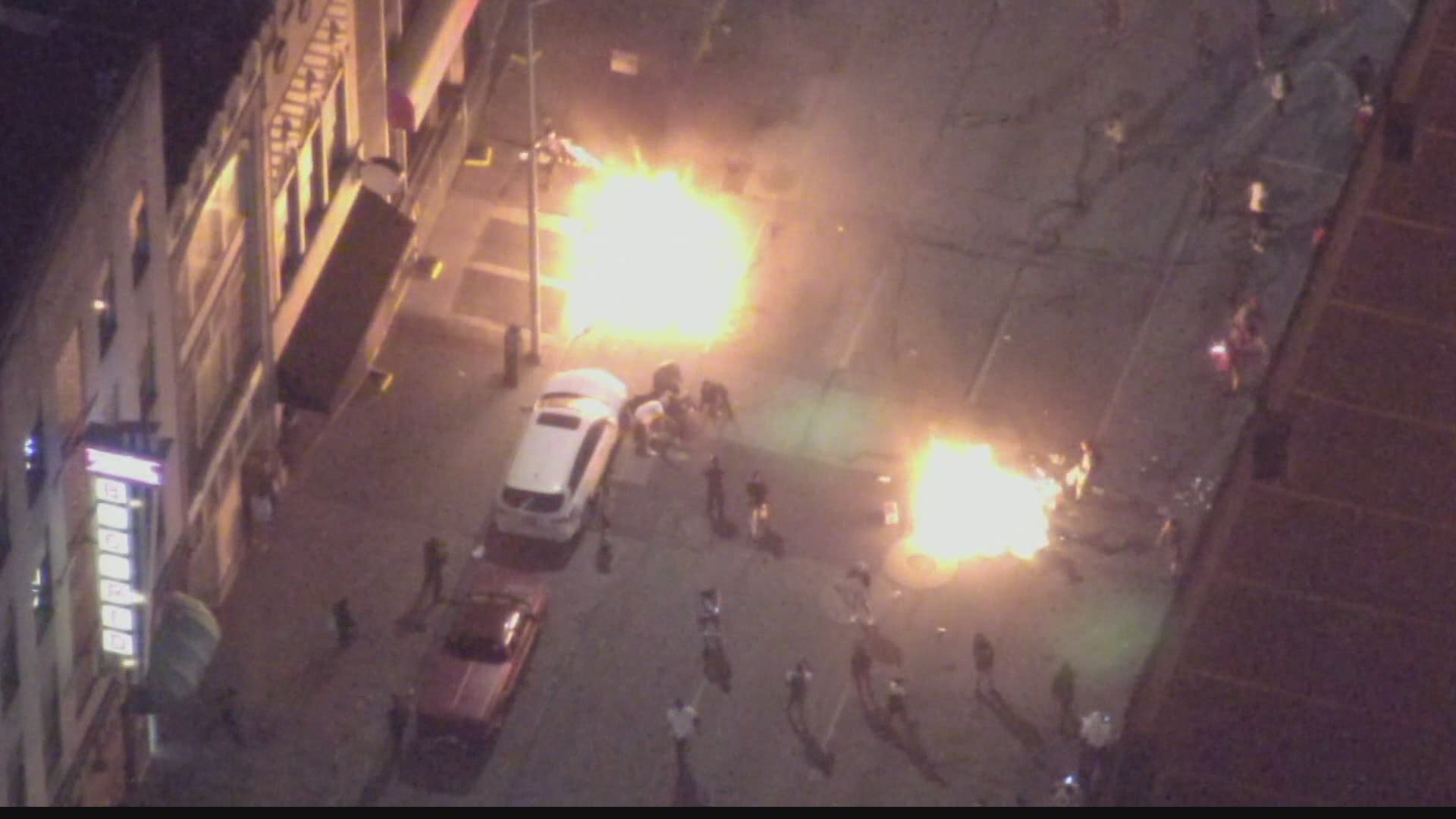 INDIANAPOLIS — The Response Review Committee released a final report Friday on IMPD's response to the protests and civil unrest in Indianapolis last May 29 through June 1.

Among the issues cited in the report are a lack of planning, coordination and communication.

The report also said the pandemic had effects on IMPD's ability to respond and on morale and staffing:

"It is extremely important to bear in mind that this fateful weekend happened in the midst of the raging COVID-19 pandemic. City agencies including IMPD were dealing with the real challenges of the public health crisis and the strain on operations, morale and staffing. The City of Indianapolis was already dealing with an unprecedented challenge and this undoubtedly affected IMPD’s ability to respond to protests and crowds."

The report goes on to say that Indianapolis had never experienced demonstrations of the size and emotional level of the May 29 through June 1 protests. When looking at peaceful protests and then people making criminal acts, the "IMPD response failed to differentiate between these two very different groups of people, with highly unfortunate consequences."

"Indeed, there were repeated instances captured on video in which peaceful protesters tried to prevent violence by others and decried the vandalism they witnessed."

The report then blames IMPD for exacerbating tensions in the crowd and made it easier to some in the crowd to turn a peaceful protest against the officers. That also allowed for lawlessness, property damage and looting to more easily take place. However, the panel noted that the department changed its approach after the first two nights, which helped bring about more peaceful demonstrations.

The report said that despite all that, IMPD officers can't be solely blamed as they were "unprepared for and insufficiently trained to address a demonstration of this magnitude, were given insufficient direction by their superiors, and were unaccustomed to demonstrations for the purpose of protesting the police themselves."

In its conclusion, the panelists wrote, "However, a strategic and thoughtful approach from the outset, coupled with better communication–internal and external–might have avoided a great deal of physical and psychological damage to our city and its residents."

In response to the report, Indianapolis Fraternal Order of Police President Rick Snyder issued a short statement reading, "Our organization is now reviewing the report to better understand its contents and the perspectives that were included (and not included). We look forward to speaking further upon it in the coming days."

After interviewing officials, witnesses, IMPD documents and videos, the panel developed a list of recommendations:

Mayor Joe Hogsett's office released a statement in response to the report:

"During the weekend of May 29 through June 1, 2020, Indianapolis experienced one of the most significant events in the city’s history. As the murder of George Floyd led to sadness, anger, and turmoil across the country, Indianapolis witnessed unprecedented mass protests in support of racial justice. However, in this same moment, as emotions rose and tensions climbed, Indianapolis also experienced instances of rioting, looting, and violence. In the days following, it was clear we needed to understand more about the factors that contributed to such an event, about the response of law enforcement to the crisis, and about what Indianapolis could do different and better in the future. As a result, on June 22, 2020, I called for an independent review to 'look at evidence relating to the law enforcement response over the timeframe, evaluating officer adherence to departmental policies and providing recommendations on future police action.'

"Today, the panel's released report does just that. I want to thank the members of the review committee for their work, skill, and expertise in producing this report. The report is thorough, critical, and offers a series of recommendations rooted in best practices that offer our City and IMPD a roadmap moving forward.

"Since those days in late May and early June, IMPD has made a series of substantial changes, including reforms to IMPD's Use of Force policy, the creation of a Use of Force Review Board, civilian additions to the General Orders Board, and operational changes to the department’s response to large-scale gatherings. These adjustments have been consequential, and Indianapolis has seen over 150 protests without similar incident since June 1. However, our work will not stop. IMPD will continue to adapt and improve its policies and practices to best serve the needs of Indianapolis, leading through transparency and community-led, community-engaged policing. We value the conclusions made by this report, respect the tremendous amount of work that went into this important document, and will work to implement the recommendations."

"Just like many cities across the country, our community was impacted by two nights of riots in May. The recommendations in this report are critical of IMPD leadership’s actions during that time, as they were intended to be. But the men and women who serve in our neighborhoods every day were the ones faced with the unprecedented violence that struck the heart of our city, and ultimately, returned peace to the Mile Square. I remain grateful for their efforts.

"While violent unrest continued across several days in other cities, we adjusted our approach, and Indianapolis has since been host to more than 150 demonstrations without significant incident. We continue to take seriously our responsibility to protect the First Amendment rights of our community members.

"In June, I made a commitment that this police department would further its march toward progress. And that's exactly what we have done – modernizing our use of force policies, adding the safety measures and de-escalation tactics recommended by the ACLU to written policy for the Event Response Group, banning no-knock warrants, deploying body cameras, and adding new layers of civilian oversight. We have also taken steps to better communicate with our neighbors during the pandemic through such efforts as virtual community meetings and releasing critical incident videos in a timely manner following officer involved shootings. This report represents another opportunity for us to make adjustments that better protect our officers and the community members they serve.

"It is my hope that our dedication to accountability, transparency, and continuing to find ways to better serve our community helps to build trust and strengthen the police-neighborhood partnerships that create a safer Indianapolis."