The doors have been closed for more than two years at Philippi Early Church of God in Christ. 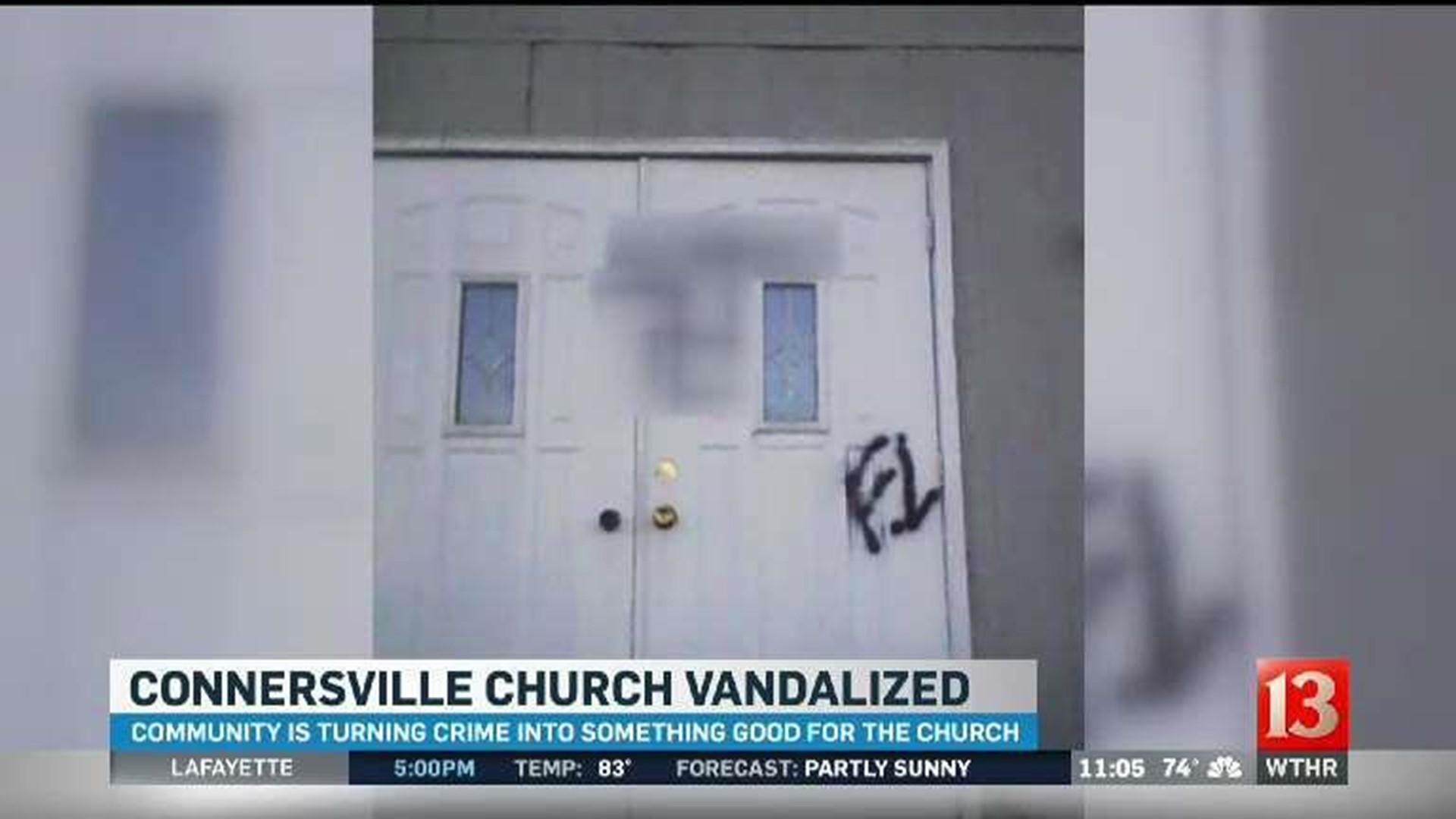 CONNERSVILLE, Ind. (WTHR) - The doors have been closed for more than two years at Philippi Early Church of God in Christ.

Not a soul has sat in the empty pews or a sermon been preached from the pulpit.

Saturday, though, Pastor Charles Thurman raised his voice in song. At first, it was soft, but then his his voice steadily became louder until he was belting out "When the Saints Go Marching In".

"I lost the church, see? But now I'm getting ready to come back, see?" said Pastor Thurman.

The church closed its doors two years ago after membership dwindled - and with it, money to keep the doors open.

Thurman said some of his parishioners passed away and others stopped coming after construction on the street out front left Ohio Ave. in ruins for at least a year.

"People wasn't going to walk in that mud to get in here," explained Thurman.

Now, though, a comeback could be in the future arising out of a situation you might not expect.

Someone painted racist slurs and symbols on the historically African American church over the weekend.

"I just thought, 'Why would someone do that to a church?'" asked Thurman's daughter, Andrea. Especially, she said, one that hasn't been open for a few years.

"Not being here, is like not being able to breathe in a way," explained Andrea who said she and her father and a few others travel to Cincinnati to attend a similar church there.

"We don't have any lights, any gas and any water," she added.

Now, because of the recent vandalism, that all might be changing.

"I don't want to see this stuff going on. Whoever is doing it, needs to be caught, " said Connersville gun store owner Jim Wulff, who said he heard about what happened from a police officer who was in his store.

Wulff's son, who now lives in Indianapolis, started a GoFundMe page to try and help the church raise enough money to open its doors again. As of Saturday night, they had raised $385 of their $1,000 goal.

"My wife told me about it and I had a brand new security system and I said, 'Well, I'll just donate it to the church'," explained Wulff.

"I didn't even know the Thurmans until today," Wulff added.

Neither did Rick Beckman.

"I saw the graffiti as a kind of fracturing of our brotherhood as humanity," said Beckman who was born and raised in Connersville. He heard about what happened on Facebook, too.

So he and his wife came to the church and told Pastor Thurman they'd like to help him paint over it.

"He was seconds away from starting to paint himself. He already had the brush out there and everything," recalled Beckman.

"He went ahead and let us take over for him," he added.

Thurman is about to turn 87 years old.

"We need people of all different colors and beliefs and backgrounds to come together and actually show the people who have the hate in their hearts that we're not going to take it," said Beckman.

"We are going to help. We're going to stand together," he added, firmly, explaining that he had a young daughter to raise and didn't want her to grow up in a world so divided.

"We're supposed to help each other. I am my brother's keeper, you know," said Andrea Thurman of all the help her father has received in the past few days.

The Thurmans are hoping this could be a turning point, a sign of better days to come and a chance to get the lights back on and people back in the pews.

"If it took that to get us a fresh start, you never know what God has in store," said Andrea.

"I just thank the Lord, it turned out the way it has," added Pastor Thurman.

EDITOR'S NOTE: The GoFundMe account supporting this cause uses an unedited picture of the racist graffiti. Please know you will see it if you click through. If you are interested in contributing, click here.