Frieda and Winifred Parker were the first African Americans to live in an on-campus residence hall in 1946. 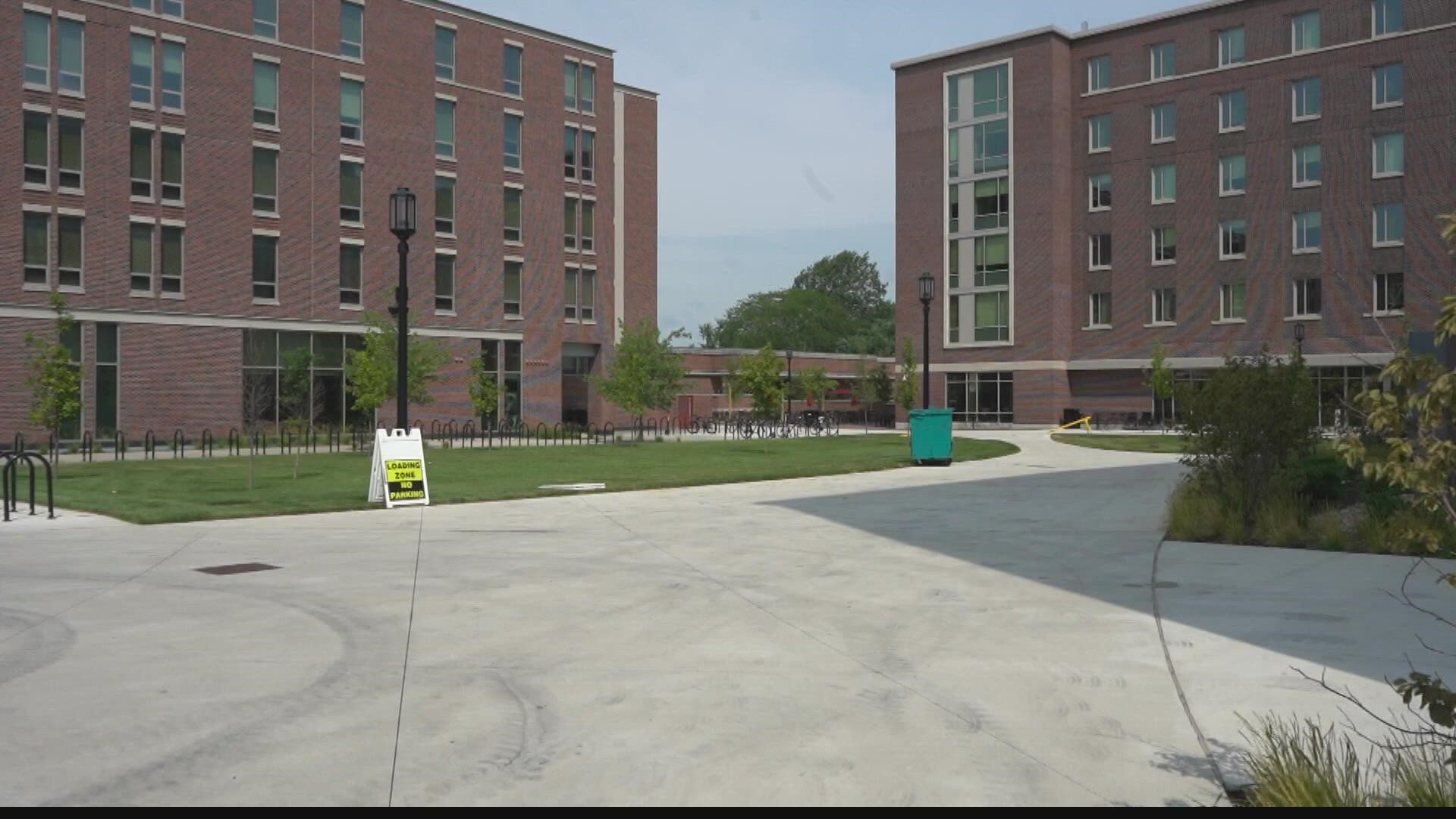 WEST LAFAYETTE, Ind. — Two residential halls on Purdue’s campus are being renamed in honor of two sisters who were trail blazing alumnae.

Griffin North and South were initially named after a mythical creature. But Purdue University is renaming them after Freida and Winifred Parker.

The Parker sisters, born just over a year apart, were inseparable, so it’s only fitting that two adjoining buildings be named after them. But equally, if not more significant, is the type of building, because the Parker sisters were the first to integrate the residential halls at Purdue University.

"The naming of the residence halls came as a result of the equity task force at Purdue," said Renee Thomas, director of Purdue University’s Black Cultural Center. “The task force was charged with amplifying the Black Boilermaker experience here at Purdue."

“This would be the opportunity to right that wrong.”

That tradition meant Black students were forced to live off campus.

The Parker sisters "didn’t have a private room. People could walk through their room,” in the building where they had to live said Norberg.

“They didn’t have a shower or a bathtub. They only had one desk for them to share. (And) it was a long commute that involved buses and they had to leave early so they missed a lot of opportunities” on campus especially because they “had to leave early” he added.

Even though Lafayette was a sundown city a couple of the black male students lived with international students “they didn’t let them live in the residence halls,” said Norberg.

In the video “Black Purdue” the late Frieda Parker said “My sister and I came to Purdue in 1946, and we could not live on the campus.”

In many ways, standing up for one’s rights and using the system which exists and the laws that exist to create change in a peaceful manner is one of the many legacies of the Parker sisters and their families. It was how the Parker sisters were raised by both their mother and their father. The Parkers also greatly valued education.

“We received a letter from the dean of women who did everything she could to discourage us from coming and living on the campus,” said the late Frieda Parker in her interview with Black Purdue.

Frieda said the Dean told them “how the people wouldn’t speak to us.”

“We didn’t believe her anyway,” she added.

“There was a fear (among the administration) that if they admitted African American students, the others would leave,” said Norberg. “The dorms were built with bonds and they had to pay off those bonds, and if they didn’t have the revenue, they couldn’t pay off the bonds."

But the Parker sisters didn’t give up.

There was a fear of what would happen to the white students, said Winifred White, Winifred Parker's daughter.

“Well, mom and aunt Frieda grew up in a segregated society. They didn’t have any exposure to white people. What about them? What was their experience going to be like? Nobody really thought about those things,” said White.

In the late 1940s while attending Purdue, the Parker sisters challenged the university on its unwritten policy of not allowing Black students to live in the dorms.

“These two young women, their families and their supporters challenged the university,” said Norberg.

“My father (Frieda’s husband) always had this saying that when you’re in college, going to class is only 50% of your education, the other 50% is outside, with the people you’re meeting and interacting with,” said Ralph Jefferson. “It was very important to both my mother and father to get the entire college experience."

“Aunt Frieda was a big sports fan, so I’m sure she was going to those college football games,” said Winifred.

The value in education

“Fred Parker was part of that very close-knit group that was ready to challenge universities across the nation to end segregation,” said Walter White, Winifred's son. "Fred Parker was a colleague of Charles Hamilton Houston who was, of course, Thurgood Marshall’s mentor.

“They went to Dunbar High School, they then went to Amherst, and they then did graduate work at Harvard,” said Walter, speaking of his grandfather. “It was Charles Hamilton Houston who came up with the concept during the Jim Crow era that if ‘separate but equal’ was going to be the law, then the states would be required to provide equal facilities to Black students.”

“He worked as a stable boy in Washington D.C.” when he was younger, said Winifred. “He really lived in pretty severe situations."

He applied to Amherst and didn’t get in the first time, she said.

“It was Charles Hamilton Houston who graduated from Amherst and came back to Dunbar to help students, and he helped my grandfather,” she said. "It opened up doors for him that he couldn’t have possibly imagined had that no happened.

"He did end up being recruited to work at Crispus Attucks High School,” said Winifred. “And whoever was in charge of recruitment there ended up finding the best teachers they could find from across the country. It turned out to be a model high school, kind of like Dunbar High School was,” said Winifred.

“I still run into people who tell me my grandfather changed their lives,” she added.

“Education was viewed as a way towards a better lifestyle, towards better opportunities,” said Ralph.

And that was something they shared with others.

And when it came to his own, “the legacy continues,” said Ralph.

Within the family trees of Winifred and Frieda Parker, there are graduates with master's degrees and doctorates from Amherst College, Berkeley College, Boston University, Hampshire College, Harvard, Indiana University, Lesley University, Purdue University (including Frieda and Winifred’s brother), London School of Economics, MIT, Skidmore College, University of California, University of Chicago and University of Michigan. Among the professions within their family tree are lawyers, engineers, business executives, and professors to name a few.

“And my grandfather was proof of that, you know, going from a stable boy to raising a family, multigenerational family, of people who are educated, and able to take care of themselves, and able to live comfortably and able to give back,” said Winifred. “I think (Fred Parker) going to Amherst changed the trajectory of our family.

“The life of the college was as important as the classes she attended,” said Winifred, speaking of her mother.

“My grandfather was outspoken, he had no problem being outspoken,” said Ralph as Winfred and Walter smiled and chuckled in agreement.

“My grandmother (Frieda Campbell Parker, after whom aunt Frieda was named) wasn’t as outspoken, but was extremely determined,” Ralph added.

“She was a college graduate,” said Walter.

One of her sisters, Pauline, participated in national bridge tournaments and sharp shooting tournaments and received a master's degree from Columbia University after graduating from Howard University. The other, Maybell, was a “tough history teacher” and a graduate of Tufts University.

“These were tough women and their character reflected throughout the family,” said Walter.

“But because we were part of an oppressed minority, people helped each other out (regardless of economic or educational background),” said Winifred. They treated everyone with respect."

“My father’s mother had a sixth-grade education. But my mother’s parents treated her with the same respect as they treated everybody else,” said Winifred.

“My parents and my grandparents, constantly took in kids who were in trouble, whose parents had died, or who were around. So, we grew up with these uncles who were not related to us, but who had lived in my grandparents' house for a certain period of time,” said Winifred.

It’s was a way of giving back to others that the Parker sisters learned from their parents and continued.

“There was this community, but the community was not based on class, or education. And this is something that I think is really missing now in our contemporary society,” said Winifred. “My mother took in kids, and the difference is, some of the kids my mother took in weren’t Black because we lived in an integrated society (as opposed to the prior generation who lived during segregation).

“Both my mother and aunt Frieda had an open door policy and you didn’t know who was going to walk in at any time,” said Winifred.

Using the system to fight for equality

“The bylaws said the freshman should all be on campus,” said Frieda’s son, Ralph Jefferson II. “(Fred Parker) also made the additional point that Purdue is a land-grant school supported by people who pay taxes. Well, we pay taxes so you shouldn’t treat us any different than anybody else.

“That’s the part I remember my mother saying,” said Ralph.

But other than that “she didn’t talk about it much,” added Ralph as Winifred and Walter nodded. Historians and the children of the Parker sisters said that Fred Parker wrote a letter to the then-president of Purdue University, seeking on-campus housing for his daughters. President Frederick Hovde denied the Parker sisters' admission to the residence halls, so Fred Parker began a letter writing campaign in support of his daughters.

The first letter was sent to Faburn DeFrantz, the executive secretary of the colored branch of the Senate Avenue YMCA in Indianapolis.

“He then assembled a motley crew of concerned citizens to pay a visit to an old friend, Indiana Governor Ralph Gates, who in turn pressured Purdue,” according to the video "Black Purdue."

The end of housing discrimination at Purdue University came in the spring of 1947. The Parker sisters were among the four first students of color in the residence halls at Purdue and Winifred was selected as the dorm president, which was proof that the dean of women’s fears were unfounded, according to both Norberg and the children of Winifred and Frieda.

Winifred studied microbiology and went on to become a researcher. Frieda majored in home economics and followed in her father’s footsteps of becoming an educator.

“Mom and aunt Frieda always extended themselves and made themselves a part of any community they were in. And they would make you feel comfortable and welcomed,” said Winifred.

“Neither my mother or aunt Freida came across as angry, militant women. They were very down to earth, very friendly, very welcoming, but they were very strong. And they never were people to be taken advantage of. They just, in their own ways, would speak up and say, ‘No, not doing that,’ or ‘No, that’s not fair.’ And they definitely taught us as children to stand up for ourselves,” said Winifred.

“We were also taught to stand up for other people,” regardless of race, gender, religion or age, said Walter as Ralph and Winifred nodded their heads in agreement.

The legacy of the Parker sisters

“Because of what (the Parker sisters) did, every African American since that time who has applied to live in the residence halls has been admitted,” said Norberg. “All of the students who are here today benefited from what Frieda and Winifred did in 1946."

The official unveiling of the placards will take place on October 3, which holds significance because it's also homecoming weekend at Purdue.

“We hope that today’s students will use their story as inspiration,” said Thomas.

She said the university wants to help change the mindset of students from “'I’m surviving at Purdue' to 'I’m thriving at Purdue.'”

Thomas said this is just one of the many steps Purdue intends to make in the future.