Thousands of new students are ready to start their college career at Purdue University. Freshman orientation has been going on during the last week and the last event may be one of the most memorable, but not for good reasons. 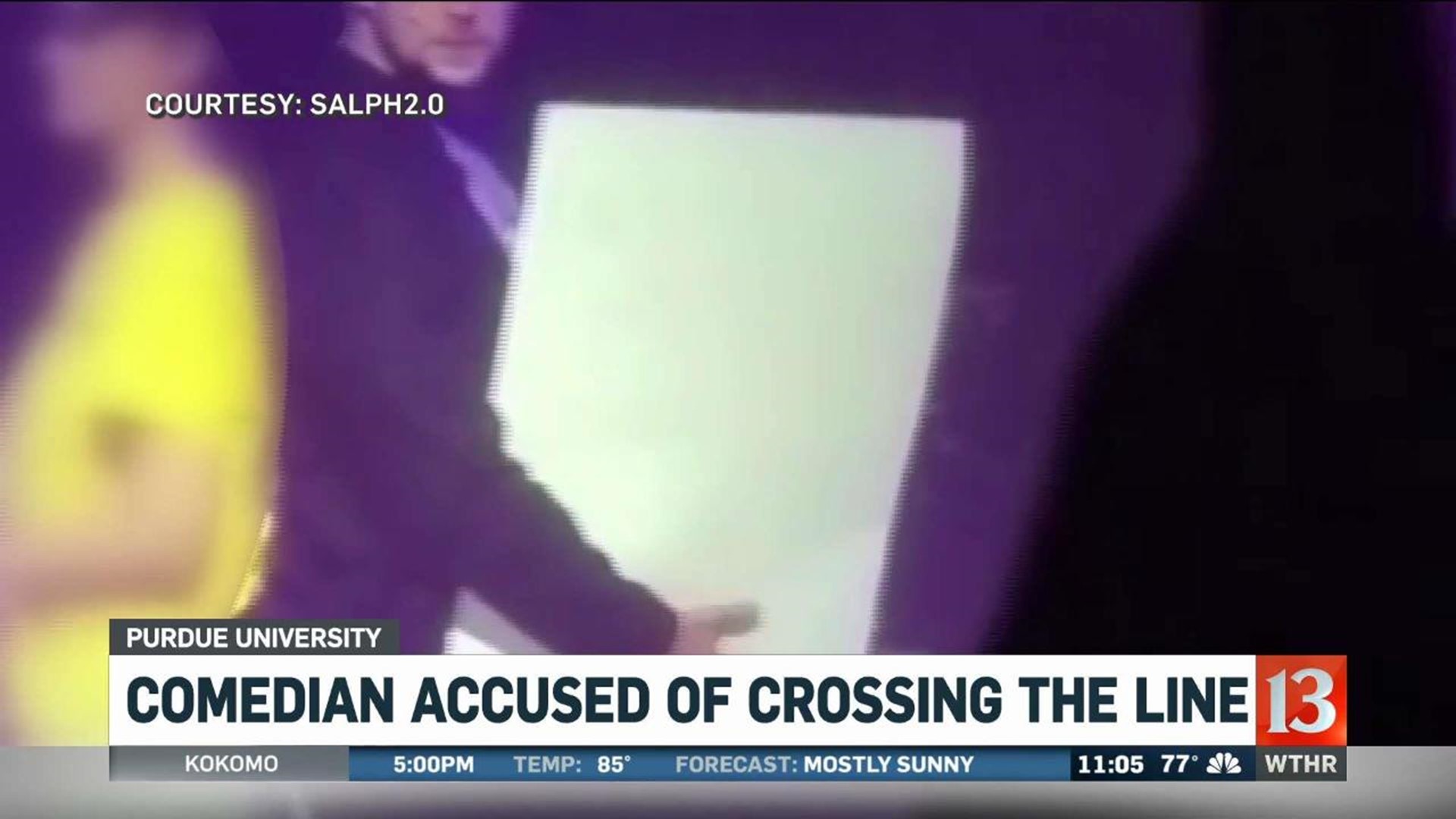 WEST LAFAYETTE, Ind. (WTHR) — Thousands of new students are ready to start their college career at Purdue University. Freshman orientation has been going on during the last week and the last event may be one of the most memorable, but not for good reasons.

Students say comedian Andy Gross picked a young woman from the audience to be part of his act.

"He started making sexual harassment jokes and doing some really provocative stuff," said freshman Eric Williamson, who was in the crowd.

"[Gross] made her touch his leg and he made jokes about, 'go Purdue,' like this is what we're here to do and that's what we're supposed to do," said freshman Raymie Shooe. "And that's when everyone started getting up and saying they were uncomfortable with things."

Students who were at the event say the young woman who was picked to volunteer left the stage crying. They say Gross tried to get other female students to volunteer as part of the act after that and none of them would.

Students say a male student was selected to be part of an act onstage after that, which also took a turn and became very uncomfortable.

"I was one of the first people to walk out, followed by another wave of people," said sophomore Jeff Terpstra, who was also a Boiler Gold Rush group leader.

"It was completely inappropriate," said Shooe. "He kept referring to his act in Vegas last weekend. It may have worked in Vegas, but it should not have worked for freshman orientation."

"You basically just watched someone get harassed and sexually be uncomfortable on stage and it's not okay," said Williamson.

"The fact that she was crying and she was so disturbed by it, as a male person, that I was so disturbed and so frozen in my seat, I can't imagine how previous sexual harassment victims felt and how even females felt in general," said Ferati.

Students who were at the show say within about a half hour of it starting, most of the audience on the ground floor had walked out.

The following tweet which shows students walking out, includes some strong language.

Here's a video of people just getting up and walking out. I don't blame the student leaders or administration for this, I purely fault that fuckass Andy Gross. Sad that this is how we close #BGR18, but at least we ended with great spirit and solidarity. pic.twitter.com/PphMJw0gYE

"As soon as we got into the lobby, everyone was hugging, asking if you were okay, do you need to speak to somebody about what happened," said Terpstra.

If you were impacted by this evening's event and need to speak with someone, please remember that support is available 24/7 by calling CARE at 765-495-CARE (2273) and selecting option 2.

Even though they weren't happy about what happened, students say it brought them closer together. They started a hashtag of #AndyGrossIsGross and encouraged others to stand behind their effort.

"There are so many parts of this that make me angry for our kids: the ironic fact that the speaker who was on stage right before this talked about how Purdue does not condone any kind of harassment or bullying of any kind; that no one simply turned off the microphone feed and escorted him off stage immediately or that Purdue’s statement does not contain any apology at all," said Rita Davis, parent of a Purdue freshman. "They are taking no responsibility whatsoever for this. We deserve a true apology that this was permitted to happen and that no one stopped it as it was going on. Kudos to our kids for walking out on this guy. They’re the only ones who actually did what was right here."

Eyewitness News has reached out to Gross, but we have not received any type of response.

Despite some social media reports, NBC confirms to Eyewitness News that Gross is not appearing on The Tonight Show Starring Jimmy Fallon.