Puppies rescued by officer from Indianapolis dumpster on road to recovery

A litter of puppies rescued from a dumpster by an IMPD officer could be looking for new homes by spring. 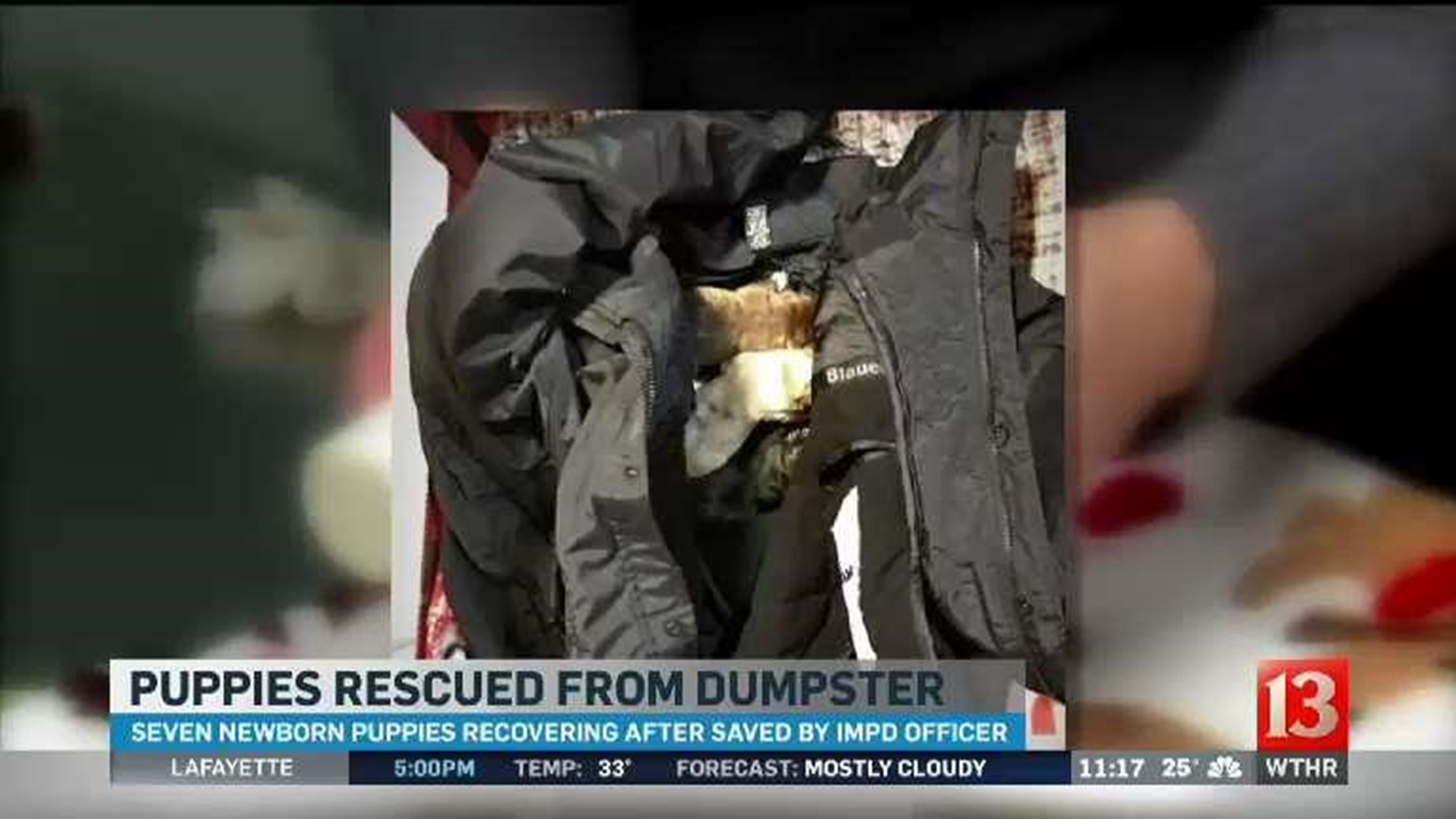 INDIANAPOLIS (WTHR) - A litter of puppies rescued from a dumpster by an IMPD officer are doing great.

They became social media stars after pictures went out this weekend, showing the puppies saved during this weekend's ice storm.

When you take a peek at them, it’s hard to believe they barely survived.

They’re so small. So adorable.

Now, seven tiny faces with little tiny whimpers are being nursed back to health. These little guys are survivors and they have a hero in blue to thank.

"You see them, how they looked at first and then they start to revive and move around and it's a good feeling," said IMPD Ofc. Scott Charleswood.

Charleswood discovered the newborn puppies, freezing, abandoned in a dumpster Saturday night. That was the same night that put Indy in the midst of an ice storm.

It was the dogs' whimper that caused neighbors to contact police. Charleswood responded to the call.

"The call was cries coming from a dumpster. Possibly a baby, possibly an animal," Charleswood explained.

When he got to Oxford Lane, Charleswood heard the cries too and started to dig.

"I started searching through bags of trash and opened them and finally heard a little sound and saw some movement on a bag," he recalled. "I felt fur and grabbed a hold of it, pulled it out and it turned out to be a small puppy and when I went through the trash bag, I found six additional puppies inside."

"To have them purposely discarded like that, I have not seen that happen before," said Tara Harris of Every Dog Counts Rescue, who is now caring for the puppies.

The pups weren't all doing so well, so the officer went into rescue mode, shielding their tiny bodies from the brutal cold.

"Some were moving around and whining, but probably another three to four were not moving much at all," Charleswood said. "I took them one at a time back to the car, wrapped them in the jacket and cranked the heat up on my car."

Charleswood contacted Every Dog Counts rescue group, which took over from there, bottle feeding the five girls and two boys all night long, until they were no longer in danger.

"I got them warmed up and fed them one by one and was very relieved that all seven of them ate very well and seemed to be hanging in there," Harris said. "The fact that the officer was out there and willing to dig through the trash to make sure he got all of them, I think that's inspiring and really touching."

"With all the rescues out, there's absolutely no need for anybody to take a small, couple-day-old puppy and put them in a trash bag," Charleswood said.

Despite that start, the puppies are now thriving because of a police protector, who went above and beyond to keep them safe.

The puppies, we're told, will be available for adoption in about ten weeks. One, however, may be spoken for already.

Charleswood says he may adopt one of the puppies - and it wouldn’t be the first time.

He says he has two dogs at home already, one of which he rescued years ago from a homicide scene.