"The only question is whether we can prove beyond a reasonable doubt that a crime was committed, and the answer to that is no," Bell said Thursday 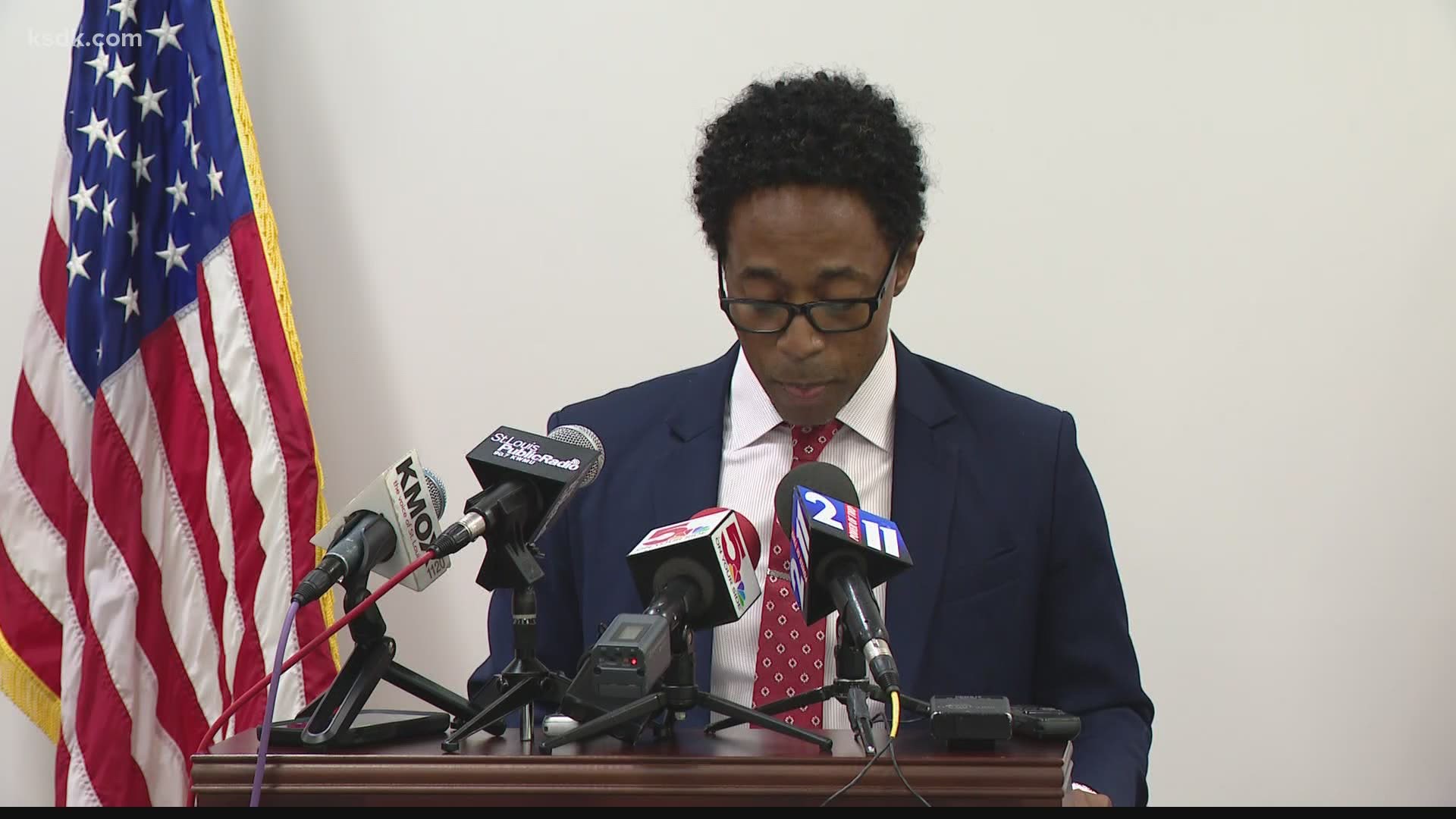 ST. LOUIS COUNTY, Mo. — St. Louis County Prosecutor Wesley Bell said he will not pursue charges after a new investigation into the 2014 death of Michael Brown.

Bell said the decision came after a five-month review of documents and other evidence. The office's newly-formed Conviction and Incident Review Unit conducted the review.

"The only question is whether we can prove beyond a reasonable doubt that a crime was committed, and the answer to that is no," Bell said Thursday. "And I would violate my ethical duties if I, nonetheless, brought charges."

"What was important to us was we didn't want to create a circus if we announced we were looking at it," Bell said. "We didn't want any outside or undue pressure to push us in one direction or another. We wanted to have the opportunity to look at it, give it a fair, fresh set of eyes and go where the facts took us, and that's what we did."

"It was a day I thought I would never see, a day that has changed my life forever — although I have been forced to learn how to cope with his absence," Brown Sr. said on the steps of the St. Louis County Justice Center on Aug. 9, 2019. "I would never guess the fact that my son would no longer be here, and justice has not been served."

Bell said the investigation was concluded weeks ago. He said his office then set a date to meet with the family to inform them of his decision before announcing it on Thursday.

Brown, 18, was unarmed when he was shot and killed by former Ferguson police officer Darren Wilson on Aug. 9, 2014. Wilson was never charged.

Brown and a friend were walking down the middle of Canfield Drive when Wilson told them to move to the sidewalk. An exchange of words led to a fight inside Wilson's SUV. Brown got out and ran, then turned around to face the officer.

Wilson told investigators that he shot Brown — who was 6 feet, 4 inches tall and 290 pounds — in self-defense. Some people in the Canfield Green apartment complex near the shooting initially claimed Brown had his hands up in surrender, but the grand jury found no evidence to confirm that.

"I also want to be clear that our investigation did not exonerate Darren Wilson," Bell said. "The question of whether we can prove a case at trial is different than clearing him of any and all wrongdoing."

The shooting led to weeks of protests that included looting and violent confrontations between demonstrators and police officers, many in riot gear and with military-style weapons. Protests escalated again after the grand jury announcement on Nov. 24, 2014. Wilson resigned days after the announcement.

While the Justice Department declined to indict Wilson, it issued a report citing racial prejudice in the Ferguson Police Department and a municipal court system that made money through court fines and legal fees, costs largely borne by black residents. A consent agreement signed in 2016 requires significant reforms.

Bell defeated Bob McCulloch — who oversaw the grand jury process — in the Democratic primary in 2018 and took office on the first day of 2019. Bell ran on a platform of reform and promised to re-examine the case as the prosecuting attorney.

Bell said his office's newly-formed Conviction and Review Unit poured over the case.

"Five months, six years, people out in the streets and nothing? He killed a man," a man shouted at Bell right as the St. Louis County Prosecutor wrapped up his news conference.

"It's over? One term, that's all you're getting. There's no integrity in what you're saying," the man screamed at Bell before county police officers escorted him out of the courthouse.

Late Thursday night, a small group of peaceful protesters gathered at the market in Ferguson where Brown was before the shooting.

Next week marks the sixth anniversary of Brown's death.

"We don't believe that justice was served in the case, but it's understandable, based on what Mr. Bell said," said the Reverend Darryl Gray, a community activist who participated in many Ferguson protests following Brown's death.

"This is one of the most difficult things I've had to do as an elected official," said Bell.

Late Thursday, Jana Gamble, a spokesperson for Michael Brown Sr. and his wife, told 5 On Your Side, "the family is devastated by the prosecutor's decision and respectfully asks the public and the media to give them a moment." 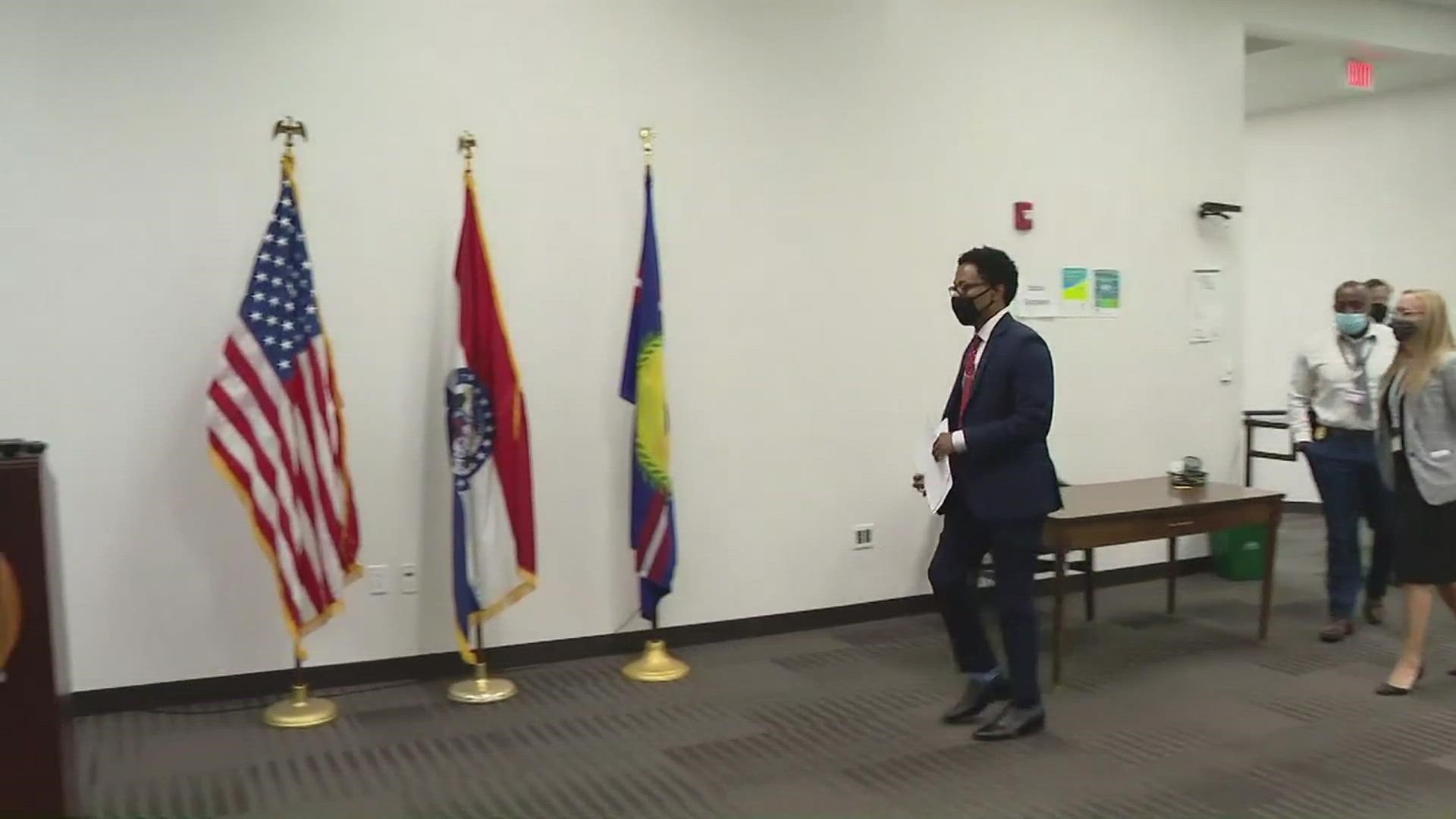 A coalition of community organizations released the following statement in response to Bell's statement Thursday.

Today, we learned that St. Louis County Prosecuting Attorney Wesley Bell has decided not to charge former Ferguson police officer Darren Wilson for the killing of Michael Brown, Jr. on August 9, 2014. For many, this news has unearthed painful memories and reopened still-unhealed wounds. In a moment during which many thousands of people are taking to the streets to demand we build a society in which Black lives matter, we are reminded yet again that all too often, in the eyes of our criminal legal system, they do not.

The organizations below first came together in 2015 following the tragic killing of Michael Brown, Jr. and the Ferguson Uprising that his death spurred. We have aligned around a vision for this region rooted in principles of justice, equity, and self-determination in which the longstanding oppressive systems of power are dismantled and replaced. We do the work of changing systems and shifting power because we know that the status quo does not and never will serve the interests of poor people and Black people in this region. Audre Lorde taught us long ago that “the master’s tools will never dismantle the master’s house.” And yet, the pain remains.

Today, our hearts go out to the family of Michael Brown, Jr.. We stand in solidarity with Lezley McSpadden and Michael Brown, Sr., who are just days away from six years without their beloved child. We hope that they will be enveloped by a community of love and support to face yet another moment of heartbreak and disappointment.

We now recommit to the work of transforming our communities to honor the life and loss of Michael Brown, Jr. and the homegrown movement that he inspired.