A Brown County church vandalized with Donald Trump graffiti shortly after the 2016 election wasn't targeted by pro-Trump political activists, but a member of their own congregation, according to police. 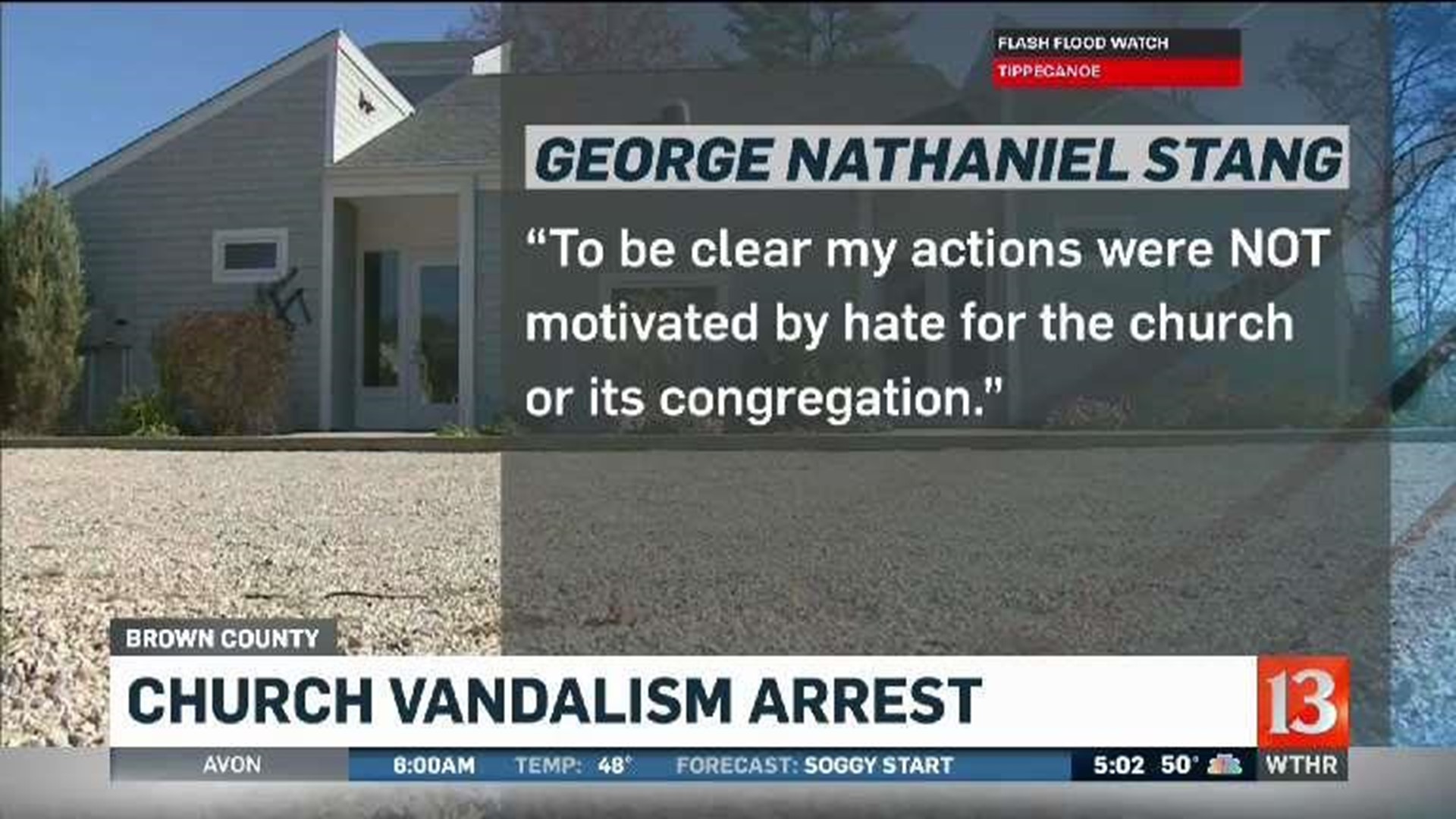 BEAN BLOSSOM, Ind. (WTHR) - A Brown County church vandalized with Donald Trump graffiti shortly after the 2016 election wasn't targeted by pro-Trump political activists, but a member of their own congregation, according to police.

People suspected the KKK or some other hate group was responsible for the graffiti. The arrest of the church organist, was a surprise - and a relief.

The Brown County prosecuting attorney's office issued a statement Wednesday saying they had charged 26-year-old George Nathaniel Stang of Bloomington with institutional criminal mischief, a misdemeanor. Stang was the man who originally claimed to have found the graffiti, and works as the organist at St. David's Episcopal Church in Bean Blossom.

It was November, shortly after the presidential election. Stang told everyone he discovered the graffiti when he arrived for Sunday morning services.

The small Episcopal church is inclusive and welcomes gay couples.

Detectives immediately suspected the crime was committed by someone familiar with the church. They said cell phone records put Stang in the area Saturday night.

According to court records, when confronted with the evidence, the 26-year-old gay man confessed.

Investigators say Stang admitted to painting the "Heil Trump" and "Fag Church" graffiti himself because he wanted to "mobilize a movement after being disappointed in and fearful of the outcome of the national election." He insisted his actions were not motivated by anti-Christian or anti-gay sentiments.

"Is there any rhyme or reason or sanity in any of this action?" Eyewitness News asked.

"He explained that one of the reasons he had done it was because of fear. He was concerned about the results of the election," Adams said.

In a three-page, handwritten statement, Stang, according to court records, wanted to "mobilize a movement."

"I suppose I wanted to give local people a reason to fight for good, even if it was a false flag," he wrote. "To be clear my actions were not motivated by hate for the church or its congregation. I of course realize now, this was NOT the way to go about inspiring activism."

Jody Boyd is relieved the mystery is apparently solved.

"Just knowing the hate crimes will be stopped here in Brown County, maybe things will be put to rest," Boyd said.

If convicted, Stang could be sentenced to a year in jail and fined as much as $5,000. Reached by phone Wednesday, he had nothing to say.

The church had no comment on the arrest, but Episcopal Diocese of Indianapolis Bishop Jennifer Baskerville-Burrows issued the following statement about the vandalism:

"I was saddened to learn this morning that the vandalism of St. David’s Church in Bean Blossom was committed by the church’s organist, Nathan Stang, who has admitted to police that he spray painted hateful graffiti on the church last November in the wake of the presidential election. This was a hurtful, dishonest, and profoundly misguided action that stands against the values of the people of this diocese and the Episcopal Church, and we will continue to cooperate with the authorities who are pursuing this case.

"We are living now in a political climate that is so divisive and highly charged that people from all across the political spectrum are making thoughtless and hurtful choices that they believe are justified by the righteousness of their causes. As people who follow Jesus, we must find a different way.

"Christians are called to hold one another accountable for our choices and actions, but also to offer one another love and forgiveness. I do not know Nathan, who is not a member of the diocese and has worked at the church for about a year, but media reports indicate that he felt frightened and alone in the wake of last year’s presidential election and that he was attempting to catalyze a movement by instilling a sense of fear in the congregation and community. Many people in our country, particularly members of sexual, religious and racial minorities, have well-founded reasons to be fearful in these difficult times, but this terrible situation illustrates why we must resist the temptation to play to those fears. Our job, as people of God, is to speak the truth in love, admit our own sins, and be ever mindful that seeking justice includes ending fear for all God’s people.

"I know that this incident has been deeply painful for many people at St. David’s, in our diocese, in Bean Blossom and surrounding communities, and across the country. As bishop, I want to offer my sincere apology to those who have been hurt both by what happened in November and what is happening today. As this story unfolds in the media and in the courts, I hope that you will join me in praying for St. David’s and its leaders, for Bean Blossom, for Nathan, and for everyone who has found in this incident a reason to be afraid."