Body cam footage from the officers with the Cumberland Police Department shows the intensity of the fire and smoke. 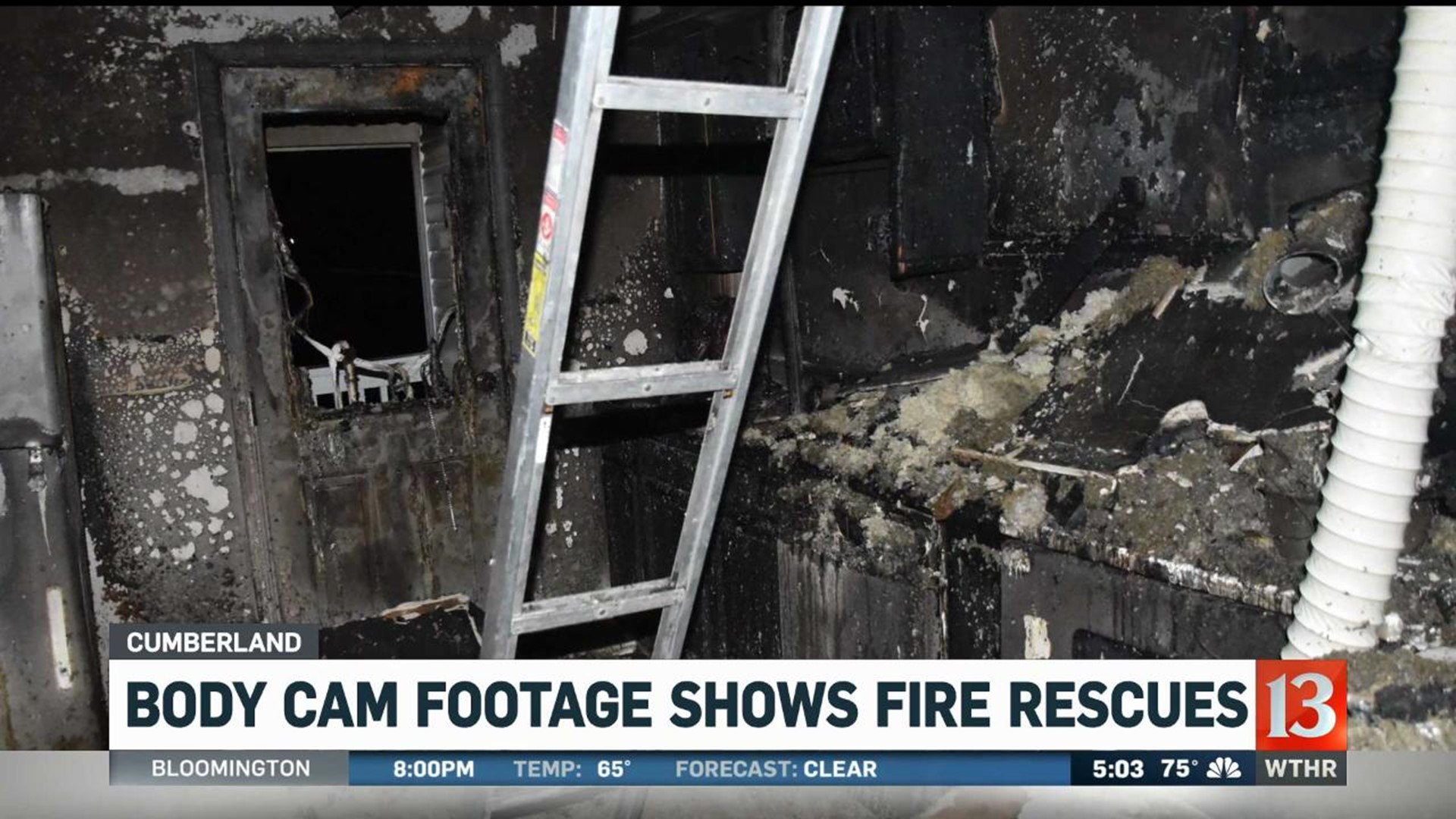 CUMBERLAND, Ind. (WTHR) - Emergency responders are getting praise after coming to the rescue of fire victims.

The dramatic video backs up their quick thinking and brave teamwork during the fire at Cumberland Manor, which broke out early Tuesday morning as most of the victims slept.

Among them is Montice Smith, who responded to an unusual sound from outside his apartment.

"I could hear someone yelling 'Help!'...or just yelling," said Smith.

When those screams woke Smith up in the middle of the night, he found smoke and his young neighbor in an upstairs window. He is convinced a young girl was about to jump from a second story window and possibly seriously injure herself or worse.

"She had one foot out the window and one foot in. She was ready to jump," said Smith.

But Montice could actually see flashing lights from emergency crews, so he knew help was close by and convinced her to wait.

Eyewitness News showed him the body cam video of the Cumberland and IMPD officers entering his apartment building to alert people. In the video, you see how fast smoke from the fire moved through the apartment building.

“It was a close one. I'll admit, in 31 years, you definitely experience a lot of intense situations over the years. It was intense. The smoke...I've always had a great appreciation for firefighters and that smoke and that heat is just something that is incredible,” said Cumberland Police Lt. Roger Waggoner.

“When we walked up to the top of the stairs we didn't know how bad it was going to be and then he said get down, breathe, so I followed him and he pushed the door open and there was more smoke than we thought in the room so we basically army crawled into the apartment,” said Cumberland Police Ofc. Ryan Russell.

Russell also credits his bulletproof vest for preventing burns to his body.

The video shows how officers worked quickly to get people to safety and even asked Montice to help.

"He was, like, 'Can you please help get everyone out of your building?' So we went around banging on doors," Smith said.

More body cam video shows an officer using his flashlight inside a smoke-filled room where he helped people to safety.

The emergency responders highlighted the rescue efforts during a news conference Wednesday morning at the Cumberland Police Department.

"It was a great joint effort between Red Cross, fire, IMPD and a couple other units. As well as Lawrence, Sugar Creek and Buck Creek," said one emergency responder.

Montice is grateful for the joint effort, especially after seeing photos of the damage inside the apartment where the fire started. He has seen plenty of real life situations like this on the news, but never imagined it would be something that happens where he lives.

"The way the fire and police department came and got everything together and made sure everyone was OK," he said. "So that went pretty good."

After also looking at the damage outside, Montice is grateful for the quick response by emergency crews.

The apartment where the fire started did not have a battery in its smoke detector.

The cause remains under investigation.