Officers march peacefully with protesters outside the governor's residence

The fourth night of protest in downtown Indianapolis ended with police officers and protesters coming together for a beautiful and peaceful moment. 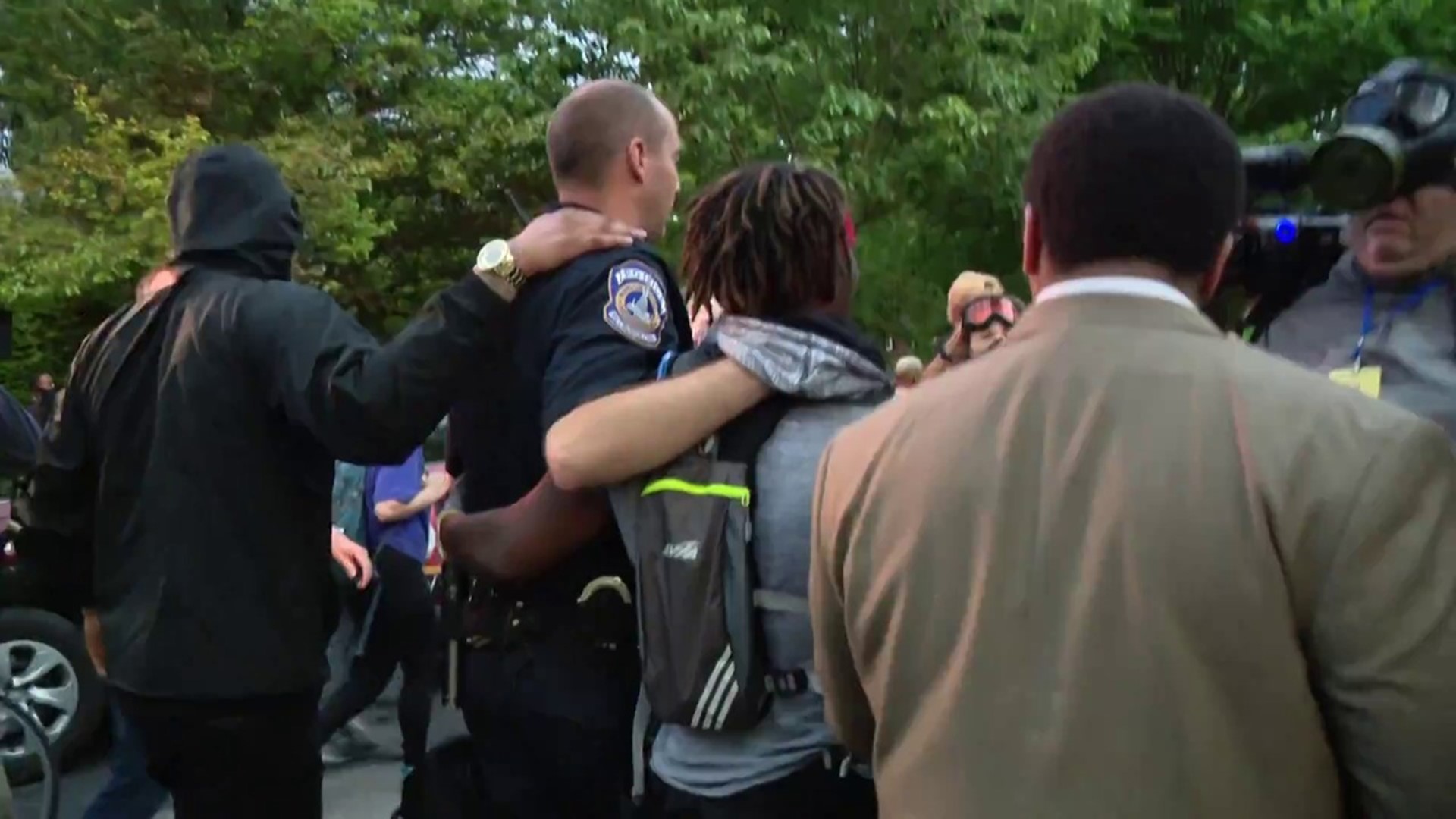 INDIANAPOLIS (WTHR) – The fourth night of protests in downtown Indianapolis ended with police officers and protesters coming together for a beautiful and peaceful moment.

Protesters left Indianapolis, marching north towards the Governor's Residence as the citywide curfew was going into effect.

When they arrived at the governor's mansion on North Meridian Street, they met police who warned them to disperse.

For close to 30 minutes, it was a tension-filled back-and-forth.

The protesters would shout their demands and police warned of arrests.

Deputy Mayor David Hampton began working as a mediator between the two sides until officers and event organizers began talking.

"It's all of our responsibility if we're gonna peacefully assemble, to keep it peaceful," said IMPD Lt. Andrew Rolinson.

The officers agreed to walk with the protesters if they would then disperse peacefully.

"I feel like our message was heard by some at least and it wasn't for nothin'," said organizer Malik Muhammad. "I never in a million years thought I would embrace a cop like that."

Reporter Emily Longnecker was there as officers and protesters hugged, shook hands, thanked each other and walked with arms around each other.

Following the walk, IMPD tweeted to thank the protesters for peacefully advocating for change.

"Officers will continue to ensure the safety of demonstrators as they walk back to their cars to travel home," IMPD said.

UPDATE: We were so proud to see officers and protestors march together in solidarity.

Our officers will continue to ensure the safety of demonstrators as they walk back to their cars to travel home.

Our thanks to the protestors for peacefully advocating for change. https://t.co/ILHWgkUCvR

Not everyone was happy with what transpired. Black Lives Matter Indy tweeted saying the whole thing was staged and was used as a distraction.

IMPD staged a media moment near the Governor’s mansion, hugging and high fiving protesters to create a distraction while they let off rubber bullets and tear gas blocks away w no media present.

The organization also tweeted, "Making this real clear. We don’t shake hands with the enemy."

Here's a timeline of what unfolded:

8 p.m. - As the curfew went into effect, a large group of protesters made their way north to the governor's residence.

8:30 p.m. - A tense standoff between police and protesters, as officers give the protesters a 10 minute warning to peacefully disperse and follow the curfew. Protesters continue to peacefully chant in front of police.

9 p.m. - Officer embraces leader of protest group and the officer says, "we can work together."

9:03 p.m. - A few officers agree to walk one block with the protesters if they agree to stay peaceful. Police and protesters hug and shake hands.

9:10 p.m. - Walk ends. Police officer gives some ending remarks about protesters and officers working together to peacefully get their message across. A protester asks if officers will walk with them again tomorrow and officer says "we're taking it one day at a time." Protesters are asked to go home safely and get some rest.

9:13 p.m. - Protester says, "I never in a million years thought I would embrace a cop like that."

10:54 p.m. - Mayor Joe Hogsett releases a statement in response to the events.

“At this pivotal moment in our country’s history, it is critical that we preserve the right to have voices of change be heard – and that we listen. Tonight, I was proud to watch a moving example of what that can look like.

We have a long, difficult road ahead if we are to address decades of mistrust and create meaningful change. In joining arms, these peaceful protestors and their police department came together to take a small step forward. It was an inspiring reminder of what makes Indianapolis a special place to call home.

I want to thank the men and women of the Indianapolis Metropolitan Police Department, as well as the Indiana State Police, for their continued hard work, as well as the advocacy of those who peacefully and powerfully made their voices heard today.”