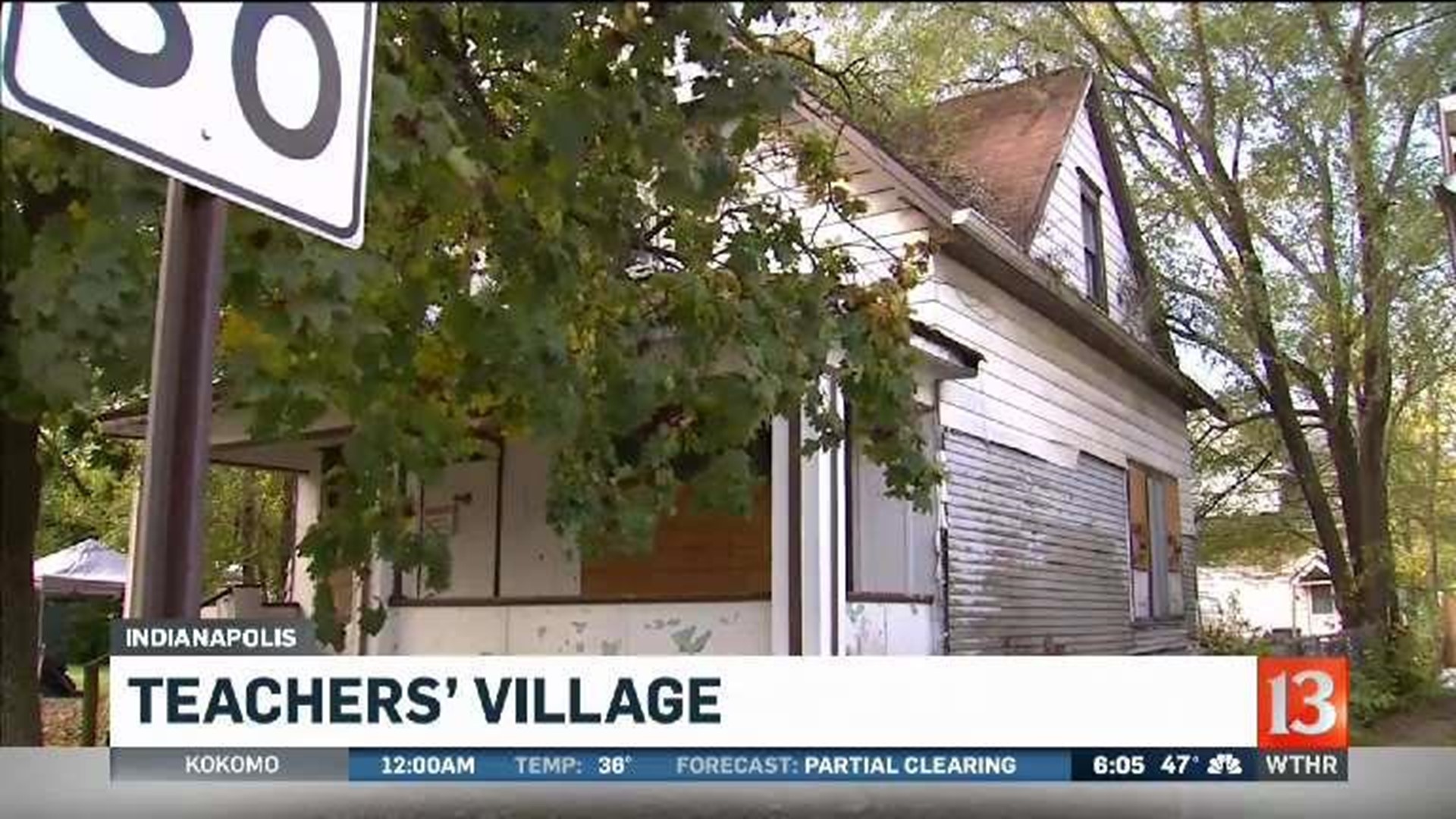 INDIANAPOLIS - Looking at the run down, boarded up vacant house at 10th and Rural, you'd probably ask "who would ever want to live there?"

At least one Indianapolis teacher would and the hope is many more will once they see what's in store.

"We intend to transform this street and this area and we want to do it through teachers," said John Franklin Hay with Near East Area Renewal.

Teachers Village will include 21 new and rehabbed homes one mile east of downtown #wthr pic.twitter.com/HwDZ4LHZIt

It's aimed at first through third-year teachers from Indianapolis Public Schools and mayor-sponsored charter schools with a goal of increasing teacher retention.

Phoebe Duvall, who teaches fourth grade at the nearby Paramount School of Excellence, is excited at the prospect.

"What I see are houses that have good bones that will eventually be developed that will be beautiful houses I can actually afford," she said, looking at several beat-up houses in need of substantial repair, she said.

Duvall said, while she'd love to live downtown, the rent is too high, so instead she spends 25 minutes driving to and from work each day.

And if she lived on the near east side?

"I'd walk to work or if I drove it'd be two minutes," she said. "It's extremely important because of teacher retention. Right now there are a lot of teachers out there who really struggle with work-life balance and one reason is because of the commute."

The program will allow teachers who qualify, based on income, to buy a rehabbed home at below-market prices. In turn, they will be required to live in the home for a minimum of five years.

"We want teachers to be part of our neighborhood long-term,” Hay said. “We want them to put down roots here and invest long-term in children and their neighborhood schools."

"We still have a lot of issues to fight,” said Chris Staab, who's lived on the near-east side and has been active in neighborhood groups for a number of years said. “There are a lot of good things happening in the community and this is one of the ideas to make it even better."

While it used to be a place people avoided, more and more it's become a place of opportunity. Over the last seven years, 100 homes have been built or rehabbed in the area known as St. Clair Place.

"Teachers are a great asset to the community," Staab said. "If we attract more teachers to come in, it will help strengthen and stabilize the community."

Duvall said she's done her homework. When she sees the two-block area soon to be known as Teacher's Village, she sees more-than-affordable homes in the works.

"Everyone I talked to in the neighborhood is kind, friendly. They look out for each other, but more importantly they actually want to get to know each other and that's not necessarily the case in every single neighborhood," she said. "I think it's a win-win. Teachers get affordable housing and teachers get some really great neighbors wanting to put energy and attention on the neighborhood.

The first dozen homes are expected to be finished this time next fall. The cost is roughly $3.1 million. Teachers' Village is a joint effort of the city, Near East Area Renewal, the Indianapolis Neighborhood Housing Partnership and Teach Plus Indianapolis.