An autopsy was conducted on Friday at Terre Haute Regional Hospital on Tyler and Charlee Worley. The cause of death for both children was determined to be stab wounds to the neck. 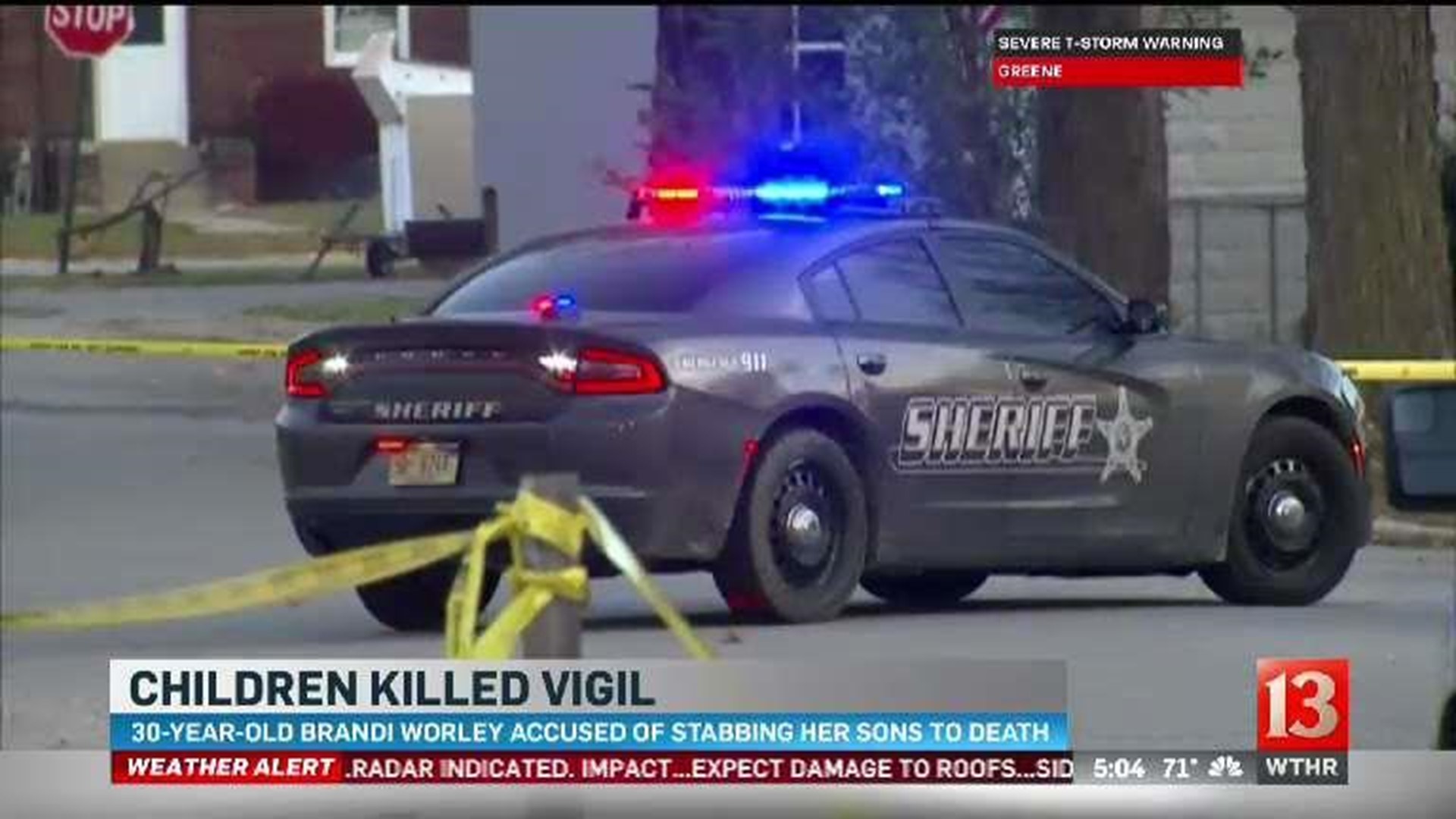 DARLINGTON, Ind. (WTHR) - An autopsy was conducted on Friday at Terre Haute Regional Hospital on Tyler and Charlee Worley. The cause of death for both children was determined to be stab wounds to the neck.

It was standing room only at the Congregational Christian Church in Darlington Friday to remember 7-year-old Tyler and 3-year-old Charlee Worley.

A few hundred people gathered to grieve on a dark and rainy Friday night looking for answers to questions, some too painful to ask out loud.

Hearts here were broken by the tragedy that played out Thursday morning in the tiny Montgomery County community, population 900.

"It's sorrowful. It's unfortunate and right now there's nothing else that we can do other than be praying for the family and trying to rally together and come together," said Tia Stultz, who's married to the church pastor.

People left mementos outside the Worley home on S. Madison St. on a day when everyone seemed to be looking for answers that just couldn't be found.

"Little Charlee and Tyler would come in with their grandma every day an get animal cookies off the shelf," said Felicia Pearson, who runs the local hardware store. She said she can't believe she'll never see two of her youngest customers again.

"There's no explanation right now and you just wonder why."

According to court documents, Brandi Worley's husband, Jason, had filed for divorce the day before. Police say Worley called 911 after killing her children and stabbing herself. Investigators at the scene say Worley told them her husband was divorcing her and was going to take her children.

"I did not want him taking them, so I stabbed them," she allegedly said.

"I just wanted to die with them," she added, according to court documents charging her with two counts of murder.

Investigators say Jason Worley was asleep in the basement and woke up to hear his mother-in-law screaming.

According to police, before calling 911, Brandi Worley called her mother, who rushed to the house.

Jason Worley told police that his wife said to him, "Now you can't take the kids from me."

An autopsy Friday morning confirmed the children died of stab wounds to their neck.

Brandi Worley remains hospitalized, but will be arrested once she is released from IU Health Methodist Hospital.

"It breaks your heart," said Darlington resident Tony Vespo. "I mean it would make the toughest man's heart sink because it's a child. Everyone knows that a parent knows your children should come first and in this case, it didn't happen."

Now, this community is coming together in moments like Friday's prayer service, trying to make sense of the unthinkable.

"It goes to show that people are here for one another in need," said Stultz, whose husband, the church's pastor,. tried to comfort people at the prayer service.

Pastor Stultz told those gathered that at some point, healing would begin - but not until there had been a lot of grieving. He said, "We have to go on. We should go on and we should do it together."