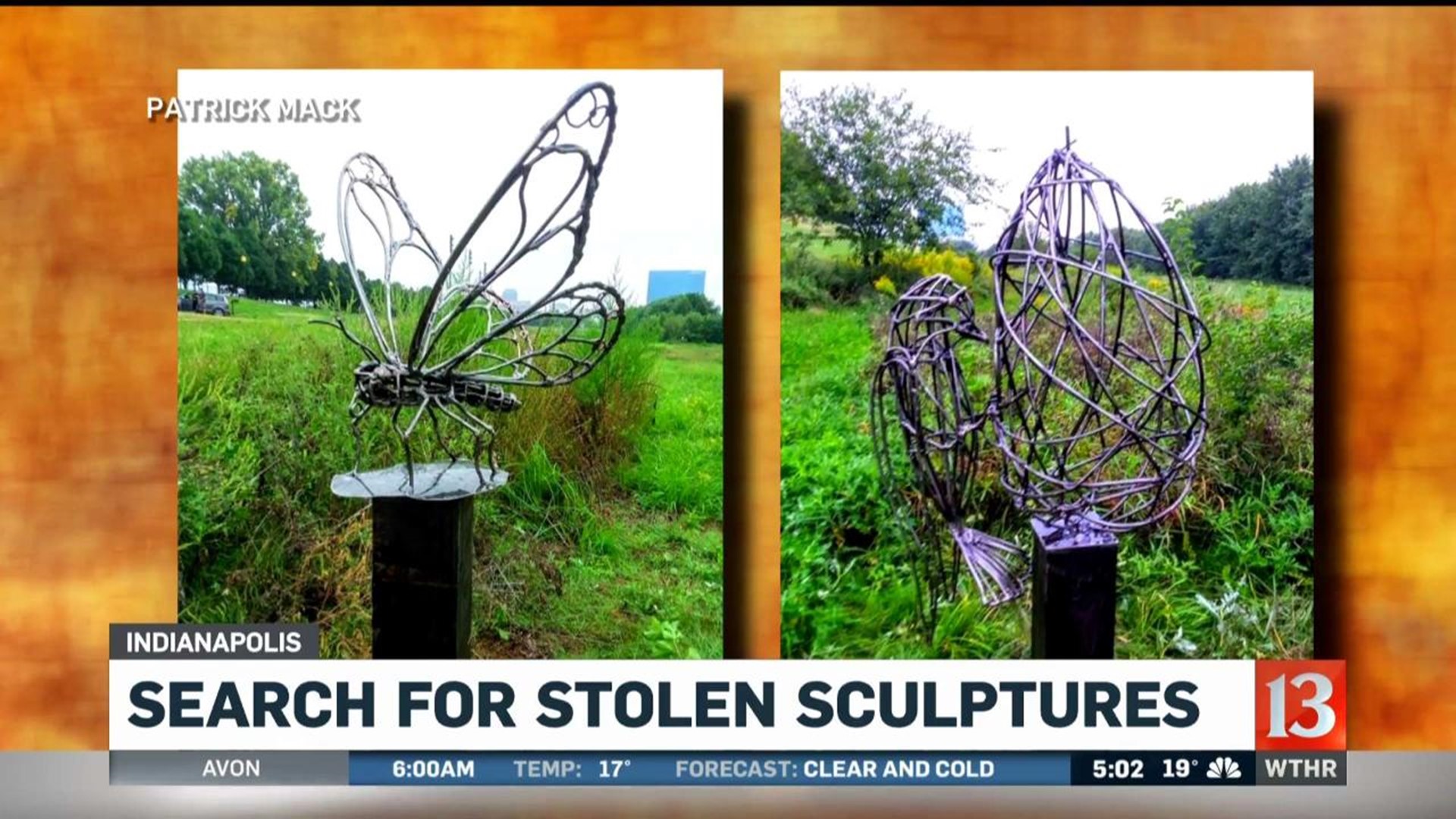 INDIANAPOLIS (WTHR) - A local artist whose work has landed in more than a half-dozen states and even in Canada got hit by a thief.

Now state police are concerned about a third sculpture in the same area. Someone took two welded, basketball-sized sculptures and only left the post they were mounted on.

The theft reportedly occurred between February 6 and February 8, police said.

The artist is Patrick Mack, who spends much of his time welding unique sculptures. It starts with a concept or idea and then onto drawings and even miniature prototypes. His artwork is not only all over Indiana in different cities, but also the country and even Canada.

“It is sad that it happened and got a little mad someone had to take it," Mack said.

But the 55-year-old artist is heartbroken about two of the sculptures which were on loan and placed on the banks of the White River.

It just so happens where the crime occurred is state property. One piece is described as a monarch butterfly sculpture and the other is a bird and nest.

“It was a great place to locate them in the ecology of the monarch butterfly and its evolution along there,” said Mack.

Indiana State Police are investigating the art theft. They are responsible for White River State Park. Officers want people to always feel comfortable reporting suspicious activity or people when they are on state property.

Officer Floyd Gibson is an Indiana State Police veteran who also serves as a field training officer for new recruits. Just like city and county authorities, they too rely on the eyes and ears of the public.

“We can't be everywhere, we try,” said Gibson.

The theft has Gibson and his fellow officers at Indiana State Police pretty ticked off, too. They hope the public will help identify the suspect so they can get the art back.

“It's there for everyone to enjoy,” said Gibson. “They didn't just steal from the State of Indiana, they stole from the people of Indiana."

Patrick's third sculpture is still on display near the banks of the White River. Gibson is concerned about it, too. State police has warned him to retrieve it for now and they're working on a better way to secure the artwork. Until then, both are keeping their fingers crossed that someone will come forward with information about the theft.

“There is always hope, but I am am a realist. I've had things over the years lifted,” said Mack. He suspects someone may have taken them for yard art or they may even go as far as trying to sell the art online.

Indiana State Capitol Police Detective Charles Meneely is asking anyone with information about these thefts to contact him at (317) 234-2131. You can also call Crime Stoppers anonymously at 317-262-TIPS. If your tip leads to an arrest, you will receive up to $1,000 in reward money. All calls to the tip line are 100% confidential.