Holly McNally was on the way home from seeing her newborn son in the NICU when she came upon a fiery crash and a man in desperate need of help. 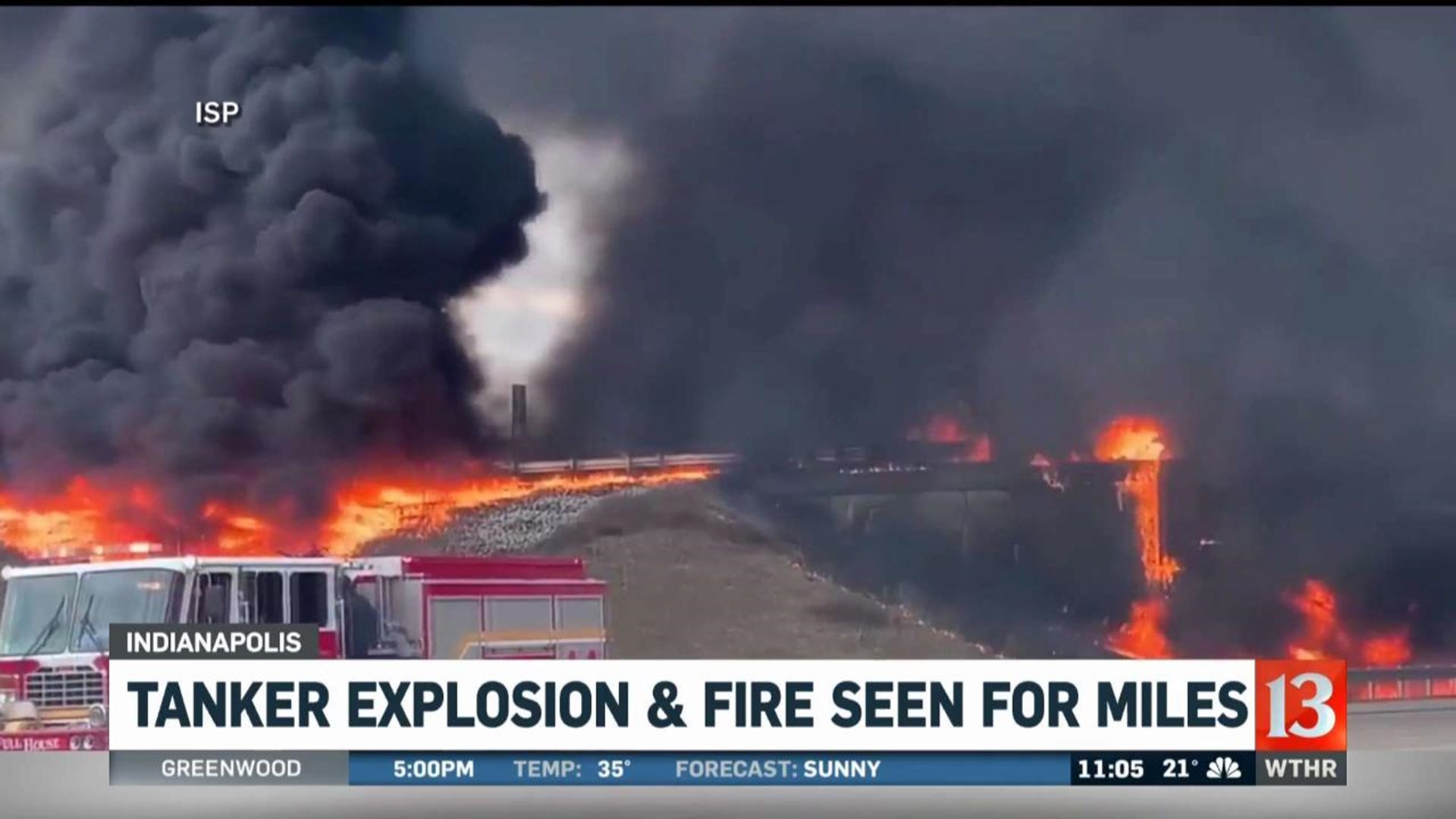 INDIANAPOLIS (WTHR) - You couldn't miss it. Fire and black smoke everywhere, after a semi and its trailer overturned on the ramp of I-465 South heading onto I-70 East on the city's eastside around 2 p.m. Thursday.

"We see a plume of smoke, huge smoke. Like it looked like a warehouse on fire," said 35-year-old Holly McNally, who, along with her mom in the passenger seat, slowed down on the interstate.

"I saw the actual semi on fire and then looked to the front of the semi and then I see a man on fire, like his head was burning," said Holly, who knew what she had to do next. "I told my mom, 'I'm stopping and I'm going over there.' and she's like, 'No you're not.' I was like, 'I am.'"

That's just what she did.

"I stopped and jumped the guardrail, ran down the big old ramp and back up the ramp to him," Holly explained.

Just as she got to semi driver, another man, 50-year-old Mitch Navarre got there, too. They used a coat to stop the man from burning.

"Only thing on this man's body were his boots, clothes were dripping off. There was nothing on him. Nothing," Holly recalled, shaking her head at the memory.

Amazingly, the driver, who was talking, told Holly his name was Jeff and that he'd been hauling jet fuel that was now on fire.

"I was on Jeff's left side, the other guy was on his right and we're trying to carry him down," she explained, recalling that all the way down the embankment, fire from the burning fuel was trailing them. "It was getting closer and closer."

Then the tanker blew, right where they'd all been standing less than a minute earlier.

"If we would not have moved and gotten out of that area, we all would have been gone," Holly said.

"Smoke was hitting us," she added. "There was a part of my brain, everybody's brain, where you think, 'When do I cut?' You know what I mean? 'When do I quit helping?' but that never hit me. I couldn't quit."

And she didn't, not even when an Indiana State Police trooper arrived and got them all to safety, right before an ambulance got there and took the semi driver, later identified as 59-year-old Jeffrey Denman of Brownsburg, to Eskenazi Hospital.

For Holly, a stay at home mom, it's the most intense experience she's ever been through in her life.

"Besides delivering a baby. That was crazy, yes," she said laughing.

Holly would certainly know something about that after the week she's had.

Monday, she went into labor with her fourth child and delivered her son Connor on her own in a hospital emergency room.

"So are you usually this much of a badass?" Eyewitness News reporter Emily Longnecker asked.

She hopes Connor thinks so when he's old enough to hear the story. After all, he's who Holly was thinking about while trying to save another man's life.

"I was like, 'What if that's my son? What if that were Connor when he's 30?" Holly remembered thinking.

She'd been driving home from the NICU after visiting her newborn 20 minutes earlier. Holly is hoping he can come home Monday.

Looking back hours later, Connor's mom says she'd do it all over again, for another mom's child.

"People need to help people. Everybody should always help somebody," said Holly.