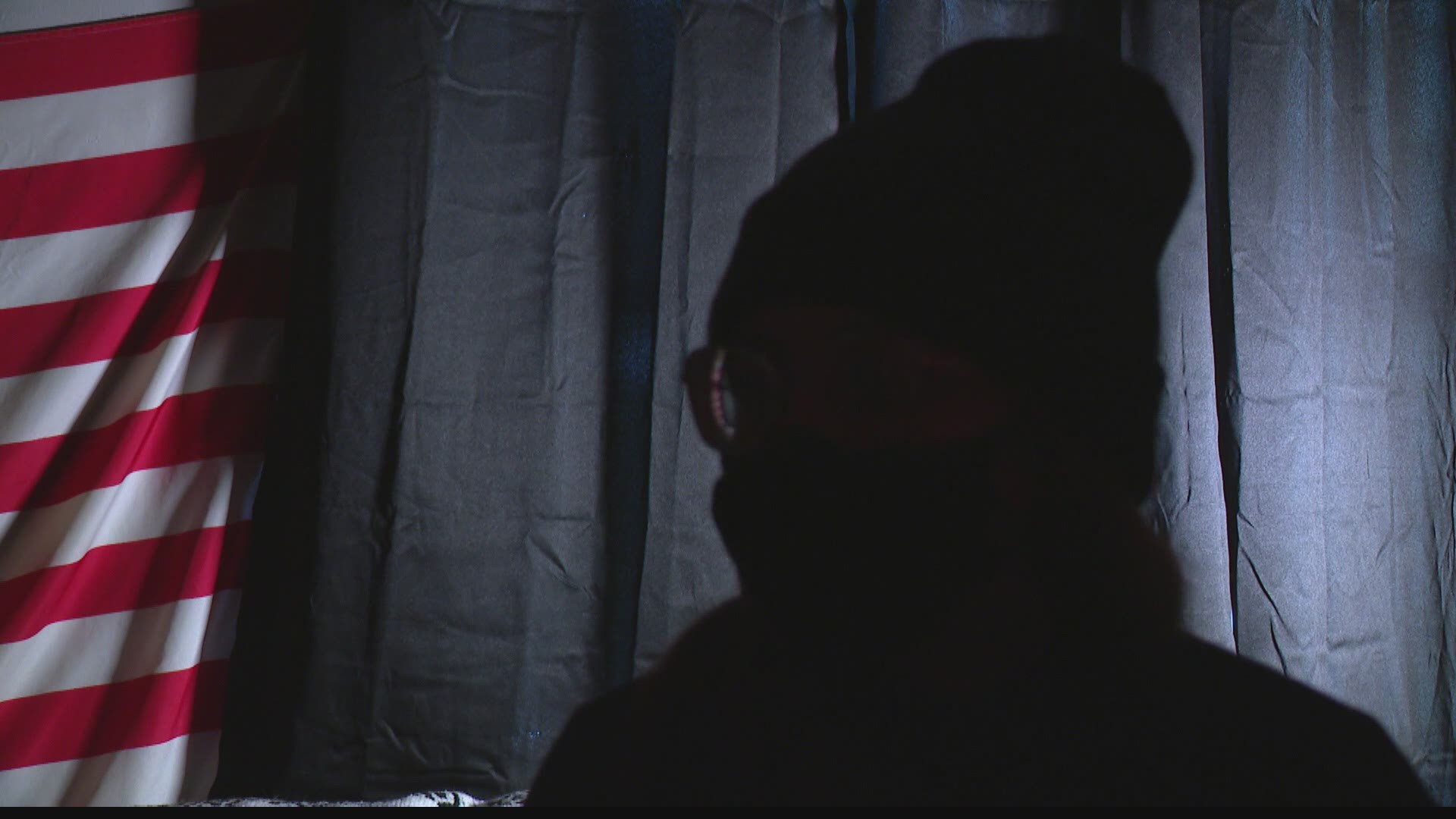 INDIANAPOLIS — It's a gut-wrenching reality for many people right now: family members becoming strangers because of the QAnon conspiracy theory.

You've likely heard about QAnon and may think it's only affecting Americans on the fringe.

But 13News talked with everyday Hoosiers whose loved ones bought into the lies.

They wanted to share how it started, why it took hold and how QAnon is tearing families apart.

QAnon grew out of the shadows online: a conspiracy theory about a secret cabal of Satan-worshipping pedophile politicians and elite Hollywood celebrities.

Followers believe "Q" is a government insider with high security clearance, who drops coded clues anonymously online to fight the "deep state." Donald Trump is seen as savior, who will rescue America.

The premise sounds strange, yet over the past few years, QAnon has spiraled into a major movement of misinformation and at times, violence, including the Capitol insurrection.

"QAnon is the mother of all conspiracies," explained Dr. Joe Pierre, Health Sciences Clinical Professor in the Department of Psychiatry at UCLA. "The idea that it's the mother of all conspiracy theories really refers to the fact that there are, in fact, a lot of different sub-beliefs, false beliefs, under the larger QAnon umbrella, from the election to the pandemic."

"There's a long history to this sort-of thing. It plays on some well-founded concerns and anxieties and suspicions that people have about our political system," said Carl Weinberg, adjunct associate professor of history at Indiana University. "I think that there are people out there who are ripe for this kind of conspiracy theory because there are real problems in their lives that they're trying to find explanation for."

It's taken hold of families, too, shattering relationships right here in Indiana. The people left after QAnon consumes their friend or family member's attention are often referred to as "QAnon Casualties."

"It does feel like you've lost your loved one for good because you can't see the light at the end of the tunnel. It's hard because I don't understand for the life of me how anyone can believe this," said one Hoosier, who wanted to remain anonymous. She says her grandmother believes in Qanon. "It seems to have breached all types of people, all backgrounds, you know, educated people, uneducated people. It's like a disease. I mean it's our, I think it's kind of our second pandemic."

"It's fiction to me. It's science fiction! I just thought it would never gain traction and ground with intelligent people, but it has," said Chris Cotton, a Hoosier whose family member he describes as QAnon-curious. "I didn't realize it was really, had nested right in our family."

Cotton's stepson is one of many people who've gone down the rabbit hole of this conspiracy theory.

A study from Indiana University shows 44% of Americans believe at least some false stories started by QAnon, including that pedophiles and cannibals currently serve in U.S. government positions.

On Reddit, 13News found thousands of people sharing horror stories of loved ones lost to the conspiracy and looking for help bringing them back.

The woman whose grandmother became a QAnon follower says it happened through Facebook.

She believes her grandmother, formerly strong, supportive and independent-minded, was likely lured in by a desire to protect children.

"It's just wild. Just like literally overnight, she changed as a person. It's like all those amazing characteristics just kind of disappeared," she said. "She's always been the protector of the family. She was always the one to come to the rescue, and now she's older, and we don't really need her to come to the rescue, so she found a cause that she could still protect people with."

But 'saving the children' turned darker, when she saw posters at her grandma's house.

"There were posters all over the garage, printed out from her printer," she said. "Wanted posters of Nancy Pelosi, Obama, Chuck Schumer, like wanted posters for them for like child trafficking and like drinking baby's blood and stuff like that, and that's when it kind of hit me: It's worse than the things she's posting on Facebook. My grandma is sharing things that trolls are posting."

Cotton was stunned when his college-educated stepson went from political distrust to QAnon curious.

"He is not crazy," Cotton said. "He's intelligent and caring. He's a great father and husband. He wasn't even really a big Trump supporter, just not a Clinton fan. He started commenting on social media or his sources shared were much more YouTube videos, and then, discussions we would have would become more polarized. Then, he was sure that something was going to happen and martial law was one of the things that would come up."

"It was exacerbated by the pandemic," Cotton said, pointing to his mask. "He's sharing links or stories that weren't anywhere founded or grounded in reality or empirical evidence, issues about 'we're going to lose our freedoms.' That slippery slope in my opinion is to continue to dig into those sites and links and videos. He'd always say 'do your research' but don't use Google because Google will filter it out. And these things came to a head when I noticed my grandson, his nephew, who's 10, starting to get worried about what might happen on Inauguration Day."

The day after violence at the Capitol, Cotton says his grandson asked for help turning his hand sanitizer bottle into pepper spray, after overhearing his uncle's conversations.

"I looked over in the passenger seat, and he was in distress! He was in tears because he wanted it for personal protection," Cotton said. "He was worried about somebody coming to get him on Inauguration Day and what might happen to kids if it wasn't someone safe who got him. And that's when I realized 'oh my gosh!' These aren't just off-the-wall social media posts and people arguing. This is real stuff in our own backyard and in our own family."

Social media, polarized politics and the pandemic took it to the extreme.

"We know that conspiracy theories do tend to flourish during times of crisis and societal upheaval," Pierre explained. "COVID really provided us an opportunity to witness conspiracy theories blossom in real time. People were scared and uncertain. That level of uncertainty is mistrust leading to false belief. Conspiracy theory beliefs aren't just a belief in something. They're also a negation of conventional wisdom, of what institutions of authority are telling us."

"There's a lack of trust in authority figures, which then opens up people to believing all kinds of crazy sounding things," Weinberg said. "The Trump phenomenon has revealed that very deep lack of trust that people have for the political establishment. The QAnon phenomenon very much plays into that feeling and deepens it."

So how do families help their loved ones get back to reality?

Experts say it's somewhat like treating an addiction, where people have spent more and more time on the conspiracy theory to the exclusion of other behaviors. Untangling that web can be difficult.

They say family members should stay connected and suggest activities outside their loved one's echo chamber, set boundaries for conversation topics and don't debate or mock their beliefs.

"The tendency can be just to dismiss everything they say: 'these are stupid crazy people'. And honestly, if that's your starting point with people, you've already lost," Weinberg said.

"I don't think it's a healthy thing for friends and family to debate with believers about their beliefs, trying to refute them or change their minds. That can lead to further problems," Pierre said. "I think it's really about being supportive, trying to be in their life and trying give people an alternative to spending all their time online, you know, fantasizing about these kinds of things."

Cotton says his stepson did start to change when QAnon prophecies about Inauguration Day didn't pan out.

And they agreed not to talk politics.

"Definitely do not use the words 'crazy' or 'stupid' or 'ridiculous.' Whatever has gotten your loved one, your family member to this point, it's trying to find out what caused that — not why they believe some video or website," Cotton said. "For us, we just don't want to cloud family issues with that, so we've agreed not to do that. Still, nobody's really changed their mind. It would be nice to just let conversation flow and not wonder in the back of your mind what might that trigger."

But some are still clinging to the conspiracy, even after Joe Biden became president, including the Hoosier whose grandma turned to QAnon.

"She's not backing down," she said. "We had all hoped that these ideas and these beliefs would go away after the inauguration, and they didn't. When doomsday doesn't happen, when the world doesn't end that day, there's always another date. It just keeps pushing. It's tough. I don't know that our family will ever really mend from this. I don't know that everyone will come back together because it seems like it's just getting worse and worse."

She's now grieving the grandmother she used to know, one of the many families who feel fractured by QAnon.