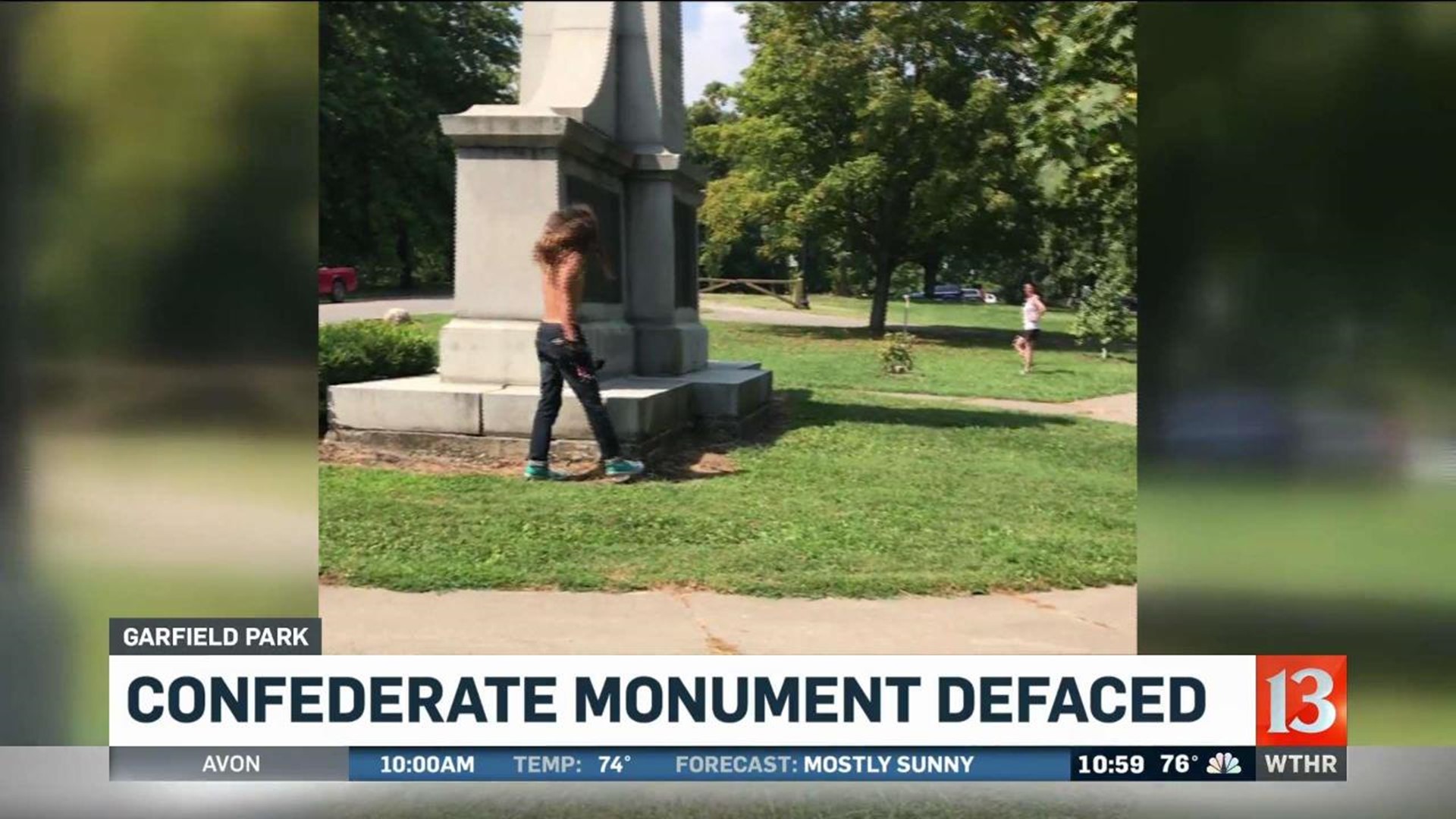 INDIANAPOLIS (WTHR) - Eyewitness News talked to a lot of people today who said they've walked past a monument with the names of confederate soldiers on it in Garfield Park and never even paid attention to it.

They're paying attention to it now, though, after many watched a man vandalize it in broad daylight Saturday.

Witnesses describe a seven-minute incident where a man struck the monument with hammers.

"I see a gentleman come up with a book bag, take his shirt off, grabs two giant hammers out of his book bags and starts screaming while hitting at the monument,” said Kurt Carman, who recorded the incident on his cell phone.

“Pieces of concrete were going flying everywhere and people started gathering pretty quickly after that,” added, Carman, who was walking his dogs nearby when it all started.

The monument was built 100 years ago as a marker for the graves of 1,616 Confederate soldiers who died in Indianapolis in a Union prison camp at 19th and Alabama.

“He wasn’t violent towards anyone,” said Carman of the man.

“He mentioned when he was hitting the memorial here that he was not here to hurt anyone, that he wanted to take down a memorial piece by piece until it was down on the ground,” Carman said.

Police showed up and arrested the man. The police report shows he is 30-year-old Anthony Ventura of Indianapolis. Carman says Ventura didn’t put up a fight with police.

“When the police showed up, he just had a seat right here on this bench, dropped both his hammers and told them to arrest him,” Carman said.

Today’s vandalism comes as protests are going on across the country over Confederate monuments and whether they should remain on public property or be relocated.

"I'm not for slavery, but I do believe that history should stand as it is,” said Eve Cundiff, who has visited the monument before.

Cundiff said she’d be ok moving the monument to Crown Hill Cemetery where the Confederate soldiers who died in Indianapolis, are now buried. An effort to move the marker 30 years ago to Crown Hill failed because of a lack of money.

"It's just history. I really don't think history should be changed. I mean, we wouldn't be how we are today without history,” said Cundiff.

Marcus Bryant is undecided about moving the monument.

"Most of my ancestors was slaves so, but I also had some ancestors that also fought the southern war, too,” Bryant explained.

Bryant was more certain about displaying the Confederate flag.

“White supremacy is using the Confederate flag as a hate thing, so I think they should just get rid of it,” Bryant added.

The debate about the monument in Garfield Park may just be getting started.

The director for Indy Parks says the city is considering moving the monument that recognizes Civil War prisoners who died in Indianapolis.

The incident has brought out a Park Ranger now assigned to the area in case there are any further incidents.