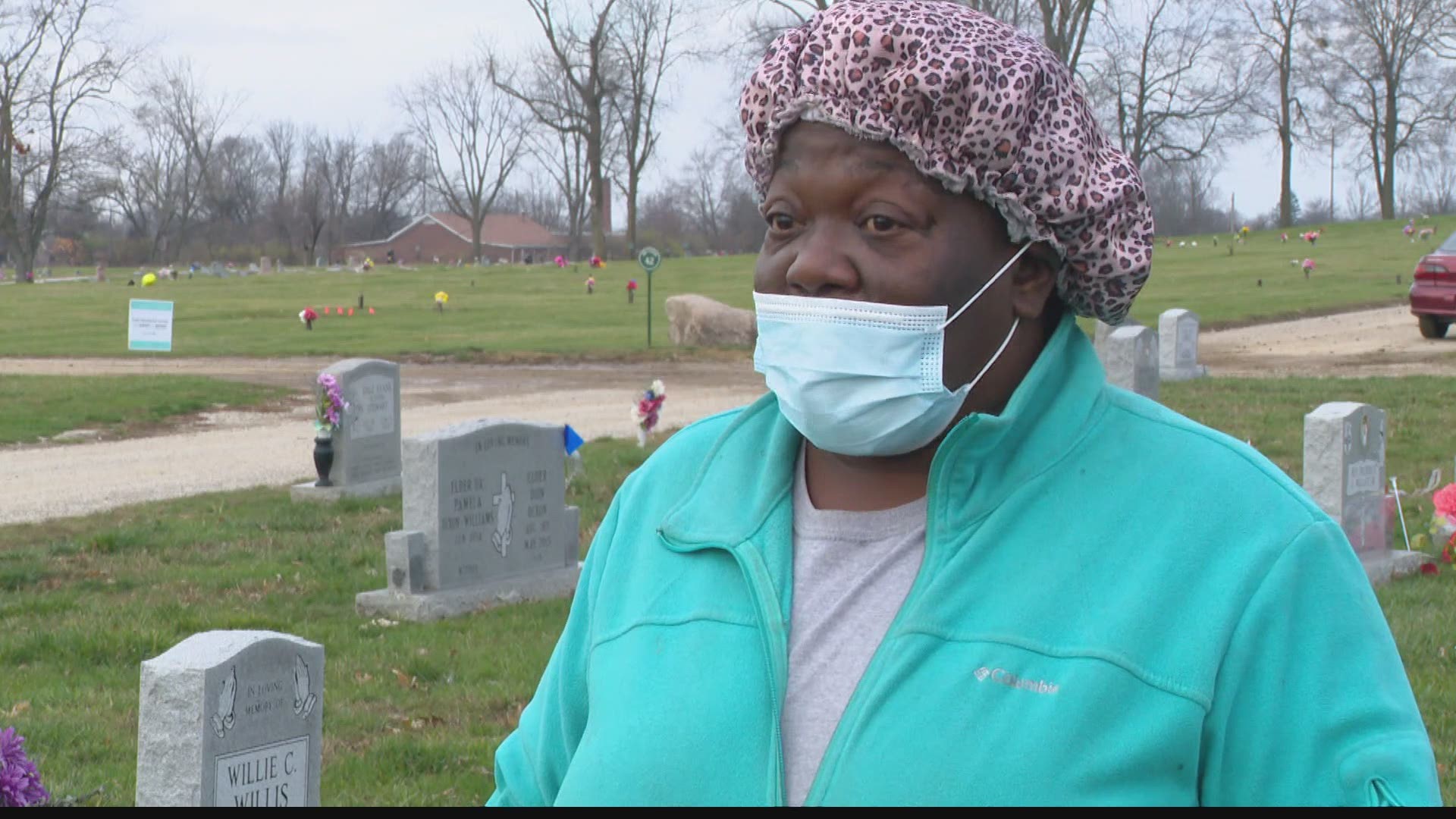 INDIANAPOLIS — Samantha Butler showed 13News the plot where she has been trying to bury her son for weeks now. 13News asked the tough questions at the cemetery and now she has some answers.

Butler already has a son buried at New Crown Cemetery located at Raymond Street and Churchman Avenue on Indy's southside.

The Indianapolis mother has now lost two sons to gun violence since 2017.

When you speak with Butler, you can actually feel the pain she's experiencing from the loss of her children.

"I don't wish it on no parent," Butler said. Tears dropped as Butler talked about the struggle to bury a second son.

The grieving mother shared one of her favorite photos of her son, Vicshawn.

"You can make good decisions for your children," Butler said. "But you never stop loving them no matter what decisions they make for themselves. Those are my babies."

When his funeral procession arrived at New Crown Cemetery Nov. 5, Butler and her family got some devastating news as they prepared in their hearts to wrap up their celebration of life for her son.

"They stopped us at the gate and said there was not going to be a burial because everything had not been paid," Butler said.

Butler showed 13News her son's plot, which is next to her other son, 22-year-old James Butler, who was killed in September 2017.

She wanted desperately to lay Vicshawn to rest, so with the financial challenges, their mother did what she could to pay the balance due.

She also had family and friends helping with the balance that she learned was about $2,400, according to their cemetery invoices.

"I have been selling dinners, selling breakfast," Butler said.

But the amount she made from the food sales paid to New Crown Cemetery still was not adding up to full payment.

The longer her son's body stayed at the Grundy Funeral Home awaiting burial, the more grieved she became knowing her son was not at his final resting place.

"My baby's soul can't rest because he sitting in the funeral home still," Butler said.

While at the cemetery Monday afternoon, 13News questioned the general manager who brought files to the site of the burial plot to help explain Butler's situation.

During that time 13News also learned of a $1,500 payment from a charity that had been sent in the mail to the cemetery a week prior.

However, the paperwork shared by the general manager at New Crown did not reflect the payments on Butler's invoices. The general manager took full responsibility and explained he had the last say about payments and arrangements. He also explained that no family obtaining services from New Crown should have to grieve about the process.

"It hurts and it hurts bad," Butler said. "The tears don't end. The pain don't end."

The general manager at New Crown Cemetery told 13News that Butler and her family can put her son to rest as soon as possible and that they would not owe any more money.

He went on to promise 13News reporter Steve Jefferson that he would bring Butler's invoice to zero.

When Samantha heard the promise, she telephoned Grundy Funeral Home to ask how soon they could arrange the burial for Vicshawn.

Butler indicated the response to be as early as noon the next day. The general manager agreed to work with the funeral home to try to make that happen.

On Tuesday, Nov. 24, 13News learned that Vicshawn had been buried next to his brother.