The Harrison Center for the Arts is having its first ever "Forgiving Tuesday," a theme to be carried out by many artists throughout the center. 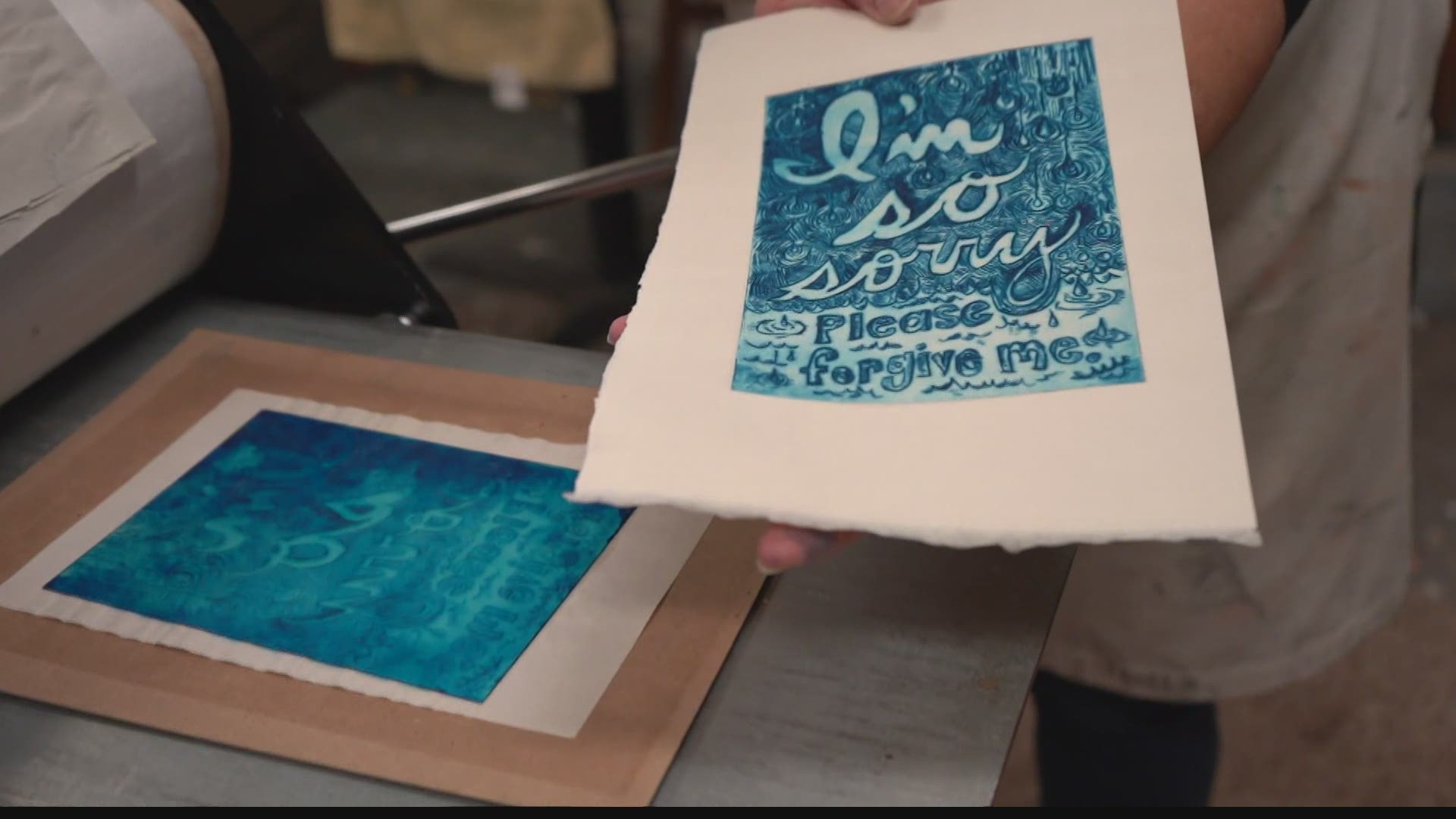 INDIANAPOLIS — The Harrison Center for the Arts in Indianapolis is offering a different take on Giving Tuesday, called "Forgiving Tuesday."

Artists at the center say it’s a gift we’re all capable of giving.

“And it doesn’t cost a thing,” said printmaker artist Lorie Lee Andrews. “Especially right now, with all the divisiveness, if we’re all going to live on this planet together. We need to start forgiving each other."

The Harrison Center for the Arts’ Moriah Miller said the first ever “Forgiving Tuesday” is launching a theme to be carried out by many artists throughout the center and is a tradition they hope to maintain every first Tuesday after Thanksgiving for years to come.

Andrews and Carolyn Springer are the artists launching the 2020 tradition.

Springer created a painting as part of her ongoing series, The Forgiving Sea Project, which she started in 2015.

“I wanted to create an ocean theme where people could interact with the painting and come to the studio and write a name on the painting of someone they wish to forgive or an even that was heavy on their heart and let that go and release it to the sea, and I paint another layer of ocean over that,” said Springer.

She said that she can feel that some of the names have been written with “a lot of pain or sorrow.” And can sense when the names all need to be “washed away” with another layer of ocean.

“The energy on the painting changes after there are a lot of names on there. And when it feels heavy, then it’s definitely time,” Springer said.

She said after another wave has been added, she can feel the lightness on the canvas once again.

“Just to get that energy out into the world, I think is so powerful,” Springer said.

Credit: Sarah Jones
Carolyn Springer created a painting as part of her ongoing series, The Forgiving Sea Project which she started in 2015.

Mental health experts agree there is a power in forgiveness.

“One, it’s intentional. Two, it’s something you have control over. And if I forgive someone it doesn’t mean I turn the other cheek, or I forget. I can still have hurt feelings. It doesn’t mean you’ve forgotten,” said Kimble Richardson, a licensed mental health counselor at Community Health Network.

Andrew created three prints as part of Forgiving Tuesday. Anyone can contact the Harrison Center for the Arts to get a free print.

“I could see them used really effectively given away (to someone) or maybe it’s in your bathroom where you get ready in the morning and can inspire you to have a forgiving nature,” Andrews said.

She said that some people have asked for a print for “someone who cut them off on 465” another was for their “rescue puppy who wasn’t yet potty trained,” but others are much “deeper.”

“The first one I had this morning was someone said ‘I need to forgive someone who has hurt me many, many times,’” Andrews said.

She said that request had an impact on her, and that helping others is something that she’s grateful to be able to do.

Richardson said there are also many other effective tools for working through forgiveness such as journaling and intentionally thinking about forgiving someone, including oneself.

“Just because you’ve made a mistake doesn’t mean you are a mistake,” Richardson said.

Some therapists have suggested writing a letter to the individual who hurt you and either disposing of it or mailing it.

The artists behind Forgiving Tuesday said after the year many of us have had this is another way to put more positive energy out there for everyone to share.