The law enforcement community is expressing condolences after news of the passing of Southport Police Lt. Aaron Allan, who was shot while investigating a car crash on the south side Thursday. 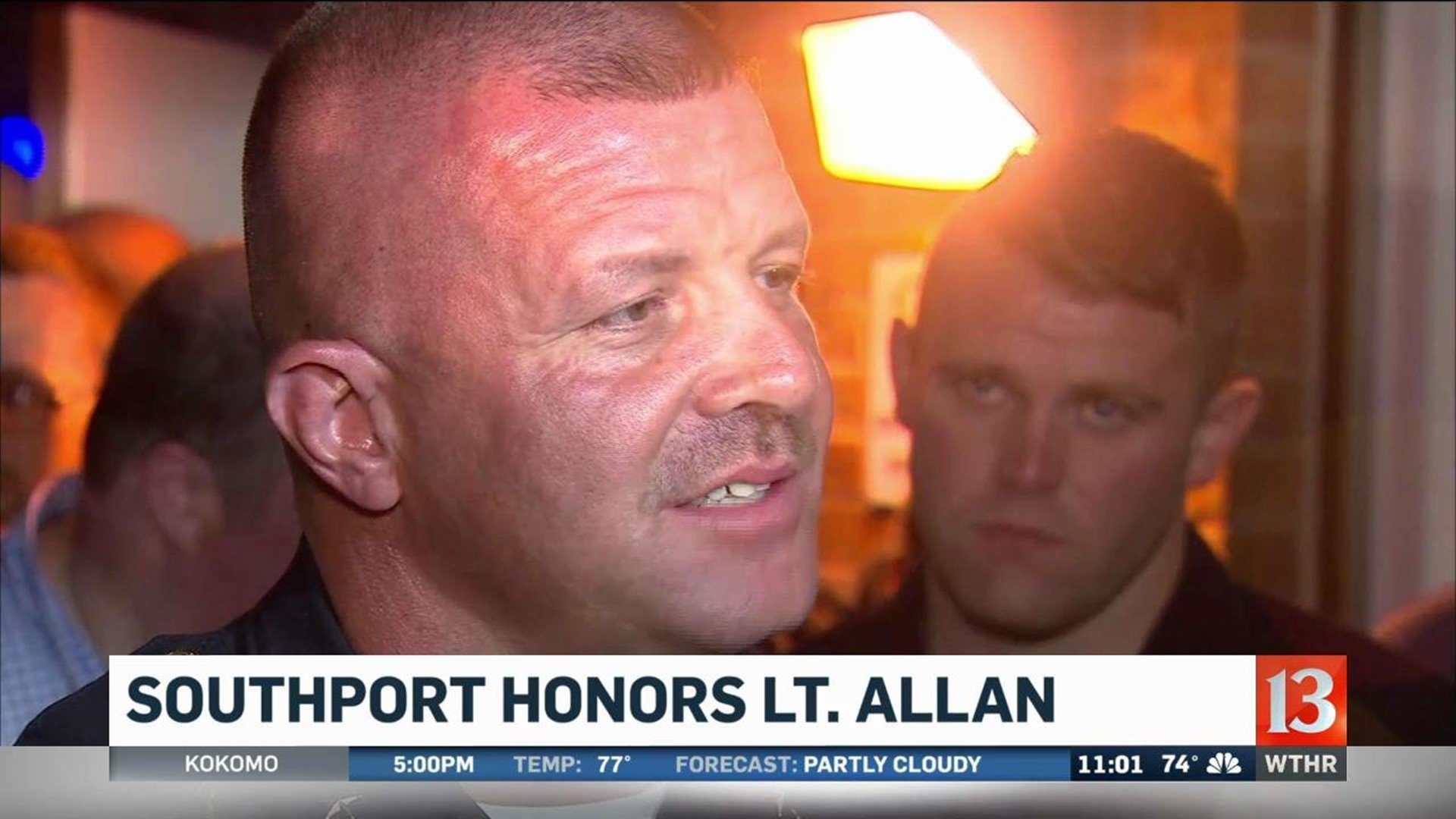 INDIANAPOLIS (WTHR) - The law enforcement community is expressing condolences after news of the passing of Southport Police Lt. Aaron Allan, who was shot while investigating a car crash on the south side Thursday.

Allan, 38, was responding to a report of a personal injury accident near Madison Avenue and Maynard Drive around 2:30 p.m. when one of the occupants of the crashed vehicle shot him. The veteran officer was taken to Eskenazi Health, where he was pronounced dead Thursday evening.

We are saddened by the loss of Lieutenant Aaron Allan. Thank you for the support and please keep Lt. Allan and his family in your thoughts. pic.twitter.com/pSyy3Lxxwz

“Today, Lieutenant Aaron Allan was doing what officers do each day: responding to the scene of an accident ready to help someone in their time of need. His death is a shocking and tragic reminder of the difficult, often dangerous work of police officers across Marion County. Together, our community grieves for the Allan family and for all the men and women who risk their lives on a daily basis to protect our city and its citizens.”

My thoughts & prayers remain with the families, friends, and our law enforcement community as we mourn the loss... 1/2

...of two public safety servants. Our officers are true Hoosier heroes and deserve our support now and always. 2/2

“My deepest condolences and prayers go to the family of Southport Police Lieutenant Aaron Allan, and to the entire Southport Police Department, as they confront this tragedy. Every day, law enforcement officers across Indiana and our country go to work to protect our families and communities. May we honor Lt. Allan’s memory and service to his community and our state.”

Many local Police and fire departments, along with some nationwide, shared their condolences on social media:

We grieve with @SouthportPD over the loss of Lt. Aaron Allen who was shot and killed when trying to render aid to car crash victims

Our prayers are with the @SouthportPD & family of Lt. Aaron Allan who was shot & killed in the line of duty today. We will #NeverForget. pic.twitter.com/fhFd6WDqv6

While assisting citizens involved in a T/C, Lt. Allan of the #SPD was shot & killed- The thoughts & prayers of the #LAPD are w/ his family pic.twitter.com/KT0cz4or4d

Our hearts are broken over the loss of Officer Aaron Allan. Thank you for your heroic service to our community. pic.twitter.com/XhXz7rJByK

Out thoughts and prayers
r with our brother and sisters. Tragically this is @SouthportPD first line of duty death #BlessedAreThePeacmakers https://t.co/4ksuF0TcMs

Our thoughts and prayers for Officer Allan and his family and for our brothers and sisters at @SouthportPD pic.twitter.com/nUlnEhiZ9T

Are prayers and condolences to the entire @SouthportPD as well as Officer Allan's family .

Saddened to hear of the loss of Southport PD Lt. Aaron Allen. Please keep his family and the department in your prayers. #ThinBlueLine

Our condolences to the family of Lt. Aaron Allan of @SouthportPD and to our fellow brothers and sisters in blue.

Our thoughts and prayers are with the family and fellow officers of @SouthportPD Lt. Aaron Allan. God speed Lieutenant. pic.twitter.com/NNKShrpcl8

On behalf of the men and women of the Sugar Creek Township Fire Department, we would like to extend our condolences to the family of LT. Aaron Allen of the Southport Police Department. RIP Sir. Thank you for your service and sacrifice.

Heartbroken over the senseless death of @SouthportPD Lt. Aaron Allen. He responded to a crash to save lives, never knew he'd give his own 🙏 pic.twitter.com/nE19MgHmYm

Our thoughts and prayers are with the @SouthportPD Police Department.

It is with deep sadness that we announce the passing of Lieutenant Aaron Allen of the Southport Police Department. Lt. Allan was shot and killed while responding to a vehicle accident this afternoon, just south of Indianapolis. Lt. Allen is survived by his wife and children. Blessed are the peacemakers, for they are called the children of god. Matthew 5:9

Our condolences go to Lt. Aaron Allan's family & the Southport Police Dept. Lt. Allan was shot & killed on duty today. We grieve with you. pic.twitter.com/ImJwr2llHA

Allan was shot moments after IMPD announced the death of Deputy Chief James Walters, who was injured in a crash on Interstate 70 last weekend.

Tough Day here in Indiana. Prayers to all pic.twitter.com/6ZhYkJxEHB

Our thoughts and prayers to Lt. Allen’s family and his fellow officers of the Southport PD. pic.twitter.com/4CVbY68cT1