Demonstrators from Los Angeles to New York marched in support of female empowerment and denounced President Donald Trump's views on immigration, abortion, LGBT rights and women's rights on Saturday, the anniversary of his inauguration. 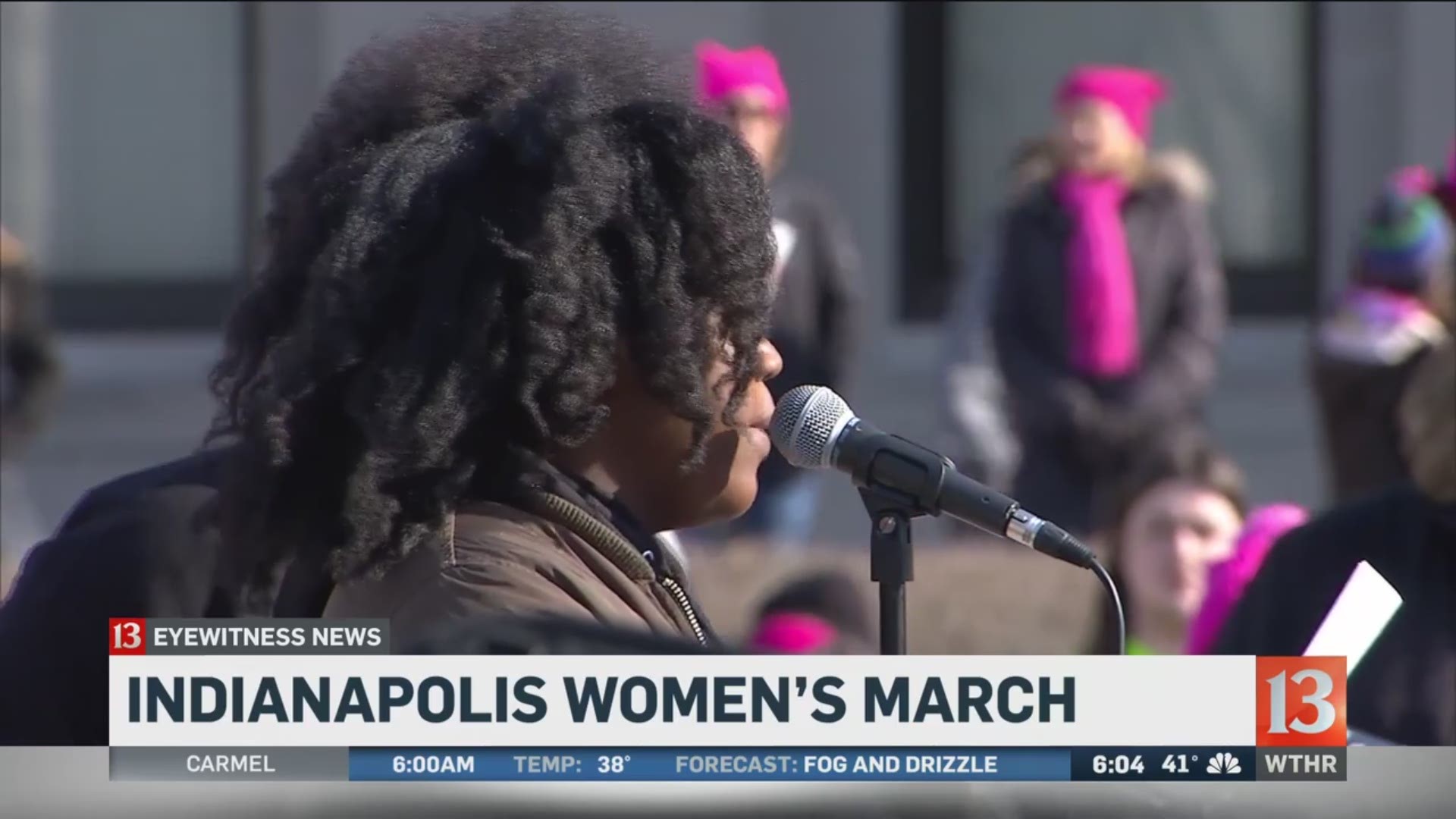 Marchers gathered at the American Legion Mall and walked to the Indiana Statehouse.

The march to the state house is on as part of the @WomensMarch on Washington in Indianapolis. Thousands of signs showing a lack of trust in the government. #WomensRights #WomensMarch2018 @WTHRcom pic.twitter.com/u4AFhA6QFu

Activists are returning to the streets a year after a million people rallied worldwide at marches for female empowerment, hoping to create an enduring political movement that will elect more women to government office.

The marchers in Indy, like the others across the country, turned out to denounce President Trump's views on immigration, abortion, LGBT rights and women's rights.

"Over the last year,” said Savannah Pearlman, “we've all felt pent up frustration and anger over policies that our government has been enacting."

They carried signs saying, "Ugh, where do I even start,” and "Girl Power vs. Trump Tower."

"You want to live in an environment or society where inclusiveness is valued and all voices are welcome," said Kathy Leising.

Savannah Cox came out. She’s 10 years old. "It's not fair to treat someone by who they are or what they look like,” she said. “They should all get equal rights and have their own way to living and no one should judge that."

Pearlman said, "We are excited to reclaim our state for the mid-term elections in 2018."

Hundreds of other gatherings were planned Saturday and Sunday across the U.S. and in places such as Beijing, Buenos Aires, Argentina, and Nairobi, Kenya.

A rally Sunday in Las Vegas will launch an effort to register 1 million voters and target swing states in the midterm elections Pearlman mentioned.

The 2017 rally in Washington, D.C., and hundreds of similar marches created solidarity for those denouncing President Donald Trump's views on abortion, immigration, LGBT rights and more.

Afterward, a wave of women decided to run for elected office and the #MeToo movement against sexual misconduct became a cultural phenomenon.

Saturday, demonstrators from Los Angeles to New York marched in support of female empowerment and denounced President Donald Trump's views on immigration, abortion, LGBT rights and women's rights on Saturday, the anniversary of his inauguration.

In Morristown, New Jersey, that state's new first lady told a crowd she was a victim of sexual violence while attending college.

Tammy Murphy, the wife of Democrat Phil Murphy, said the attack occurred while she was a sophomore at the University of Virginia. She said she was walking along a path when a man grabbed her and pulled her into some bushes. She said the man tried to take her clothes off and put a crab apple in her mouth to silence her but she bit his hand and fled half-dressed to a nearby fraternity house, where students called police.

Longoria, who starred in TV's "Desperate Housewives," told marchers their presence matters, "especially when those in power seem to have turned their backs on reason and justice."

Portman, an Academy Award winner, talked about feeling sexualized by the entertainment industry from the time her first film, "Leon: The Professional," was released when she was 13 and suggested it's time for "a revolution of desire." In the 1994 film, Portman played a young girl taken in by a hit man after her family is killed.

Woodard urged everyone to register and vote, saying, "the 2018 midterms start now." And Davis spoke with the passion of a preacher as she discussed the nation's history of discrimination and her past as a sexual assault survivor.

"We made a lot of noise," said Elaine Wynn, an organizer. "But now how do we translate that noise into something concrete or fulfilling?"

Linda Sarsour, one of the four organizers of last year's Washington march, said Las Vegas was slotted for a major rally because it's a strategic swing state that gave Hillary Clinton a narrow win in the presidential election and will have one of the most competitive Senate races in 2018.

Democrats believe they have a good chance of winning the seat held by embattled Republican Sen. Dean Heller and weakening the GOP's hold on the chamber.

Organizers say Nevada is also a microcosm of larger national issues such as immigration and gun control after Las Vegas became the scene of the deadliest mass shooting in modern history.

Following the October massacre, the Sunday rally is being held at the University of Nevada, Las Vegas' stadium 10 miles (16 kilometers) southeast of the famous Strip where a gunman opened fire on a concert, killing 58 people.

Authorities have kept details confidential about security for the Sunday rally at the 40,000-seat stadium.

Ahead of the Las Vegas rally, Planned Parenthood Rocky Mountains will hold a huge voter registration training effort on Saturday as part of a nationwide effort to register over a million voters in 2018.

Minnie Wood, a nurse practitioner who participated in the 2017 gathering in Las Vegas, said she was left with a sense of solidarity and "this feeling of almost a quickening, this resistance brewing."

It also laid the groundwork for the recent movement that brought a reckoning for powerful men accused of sexual misconduct, Sarsour said.

"I think when women see visible women's leadership, bold and fierce, going up against a very racist, sexist, misogynist administration, it gives you a different level of courage that you may not have felt you had," she said.

Many women inspired by last year's massive marches went on to seek higher office, such as Mindi Messmer, a 54-year-old environmental scientist from Rye, New Hampshire.

Messmer was a state legislator when she attended the 2017 march in her state capital of Portsmouth. She's now a candidate for the seat held by retiring U.S. Rep. Carol Shea-Porter, a fellow Democrat.

Other women running for Congress include newcomer Chrissy Houlahan, who hopes to unseat a Republican in suburban Philadelphia, and Sara Jacobs, a former aide to Barack Obama, seeking the Southern California seat held by retiring Republican U.S. Rep. Darrell Issa.

Democratic officeholders pledging to elect more progressive candidates in swing states will be among the speakers in Las Vegas. Cecile Richards of Planned Parenthood also will address the crowd.

Last year's march in Washington sparked debate over inclusion, with some transgender minority women complaining that the event seemed designed for white women born female. Some anti-abortion activists said the event did not welcome them.

The organizers for the Sunday rally are striving for greater inclusion this year, with Latina and transgender female speakers, said Carmen Perez, another co-chair of the 2017 Washington march. Women in the U.S. illegally, sex workers and those formerly incarcerated are welcome, she said.

Eman Hassaballa Aly, a 38-year-old digital communications manager and activist, said last year's gathering in the Chicago area prompted two Muslim women she knows to run for office - one for state Senate and one for Congress.

"It was incredible that all these people came together," said Aly, who addressed the 2017 Chicago event. "We realized how powerful this thing could be."