In central Indiana, Random Acts of Flowers volunteers make the rounds to more than a dozen area hospitals and nursing homes thanks to donations from several places, including America's largest florist, Kroger. 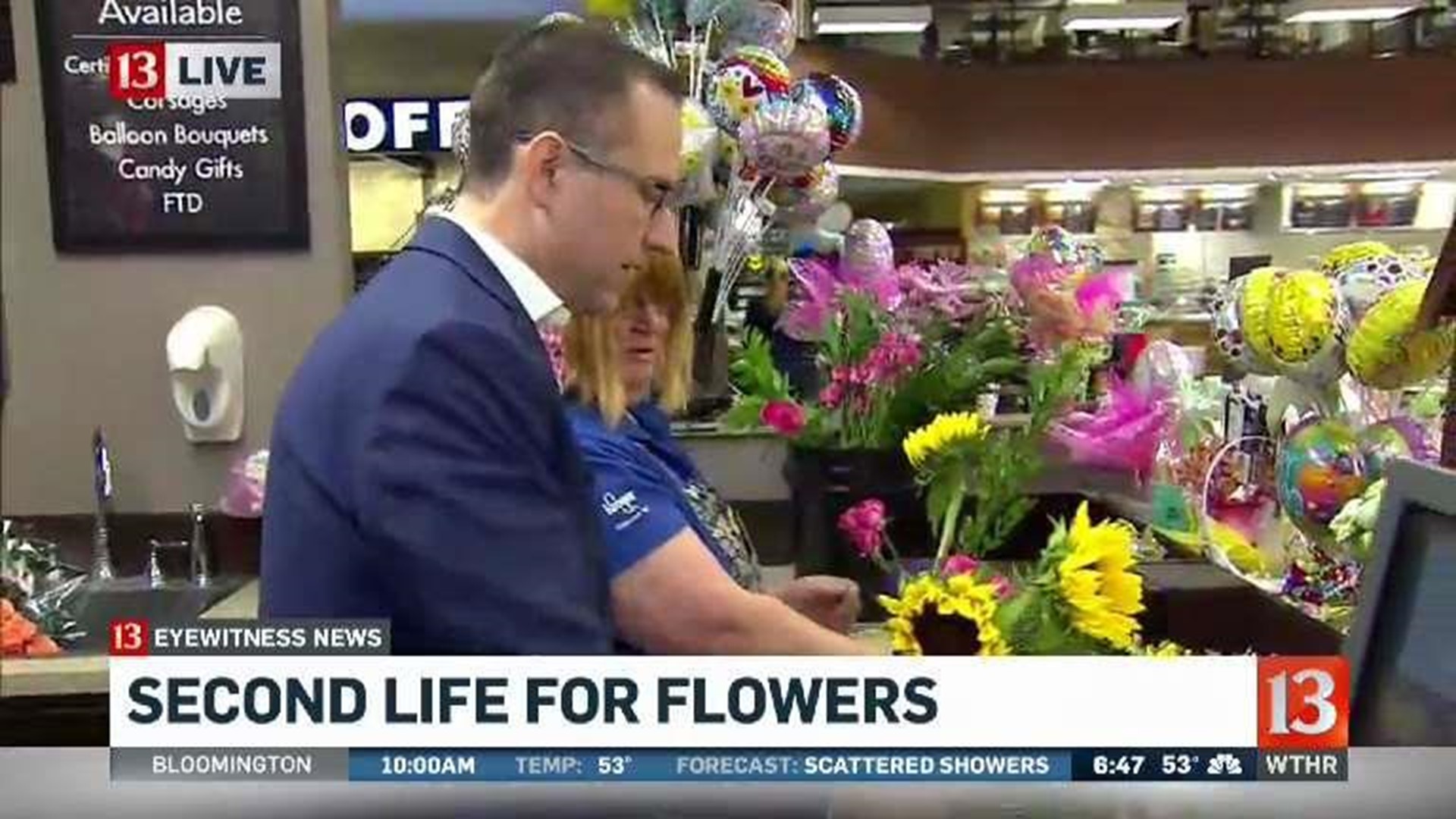 INDIANAPOLIS (WTHR) - Whether it’s an anniversary, Valentines or Mother’s Day, flowers seem to convey that love more and more.

Flowers are also often sent to say “get well” and that’s the focus of an organization relatively new to Indianapolis.

“He was just thrilled, almost to the point that there was a tear in his eye,” said Roger Neu said.

Neu is talking about one of the reactions he got when he surprised a patient with flowers while making deliveries for Random Acts of Flowers.

Free floral deliveries are made to nearly a dozen central Indiana hospitals and nursing homes, thanks to the generosity of people and corporations.

“Anywhere from 5 to 7 days is typically a good rule of thumb for the shelf life of flowers. Everyday we're going through and looking at the freshness of the flower,” Kroger Floral Sales Manager Sheila Fair said.

Stunning and striking, they line the shelves of Kroger – the world's largest florist.

“All of our stores have multiple shipments every single week and we always want the freshest flowers out there, so every day we're going through and looking at the freshness of the flower,” Fair said.

But what happens when they get a little “long in the stem?”

“We treat our floral department just like any perishable department in the store; just like we treat bananas in produce or fried chicken in the deli,” Fair said.

About half a dozen central Indiana Kroger stores now donate them to Random Acts of Flowers.

“We call it deconstruction of flowers to get them ready to put them in the final presentations,” Roger Neu explained one day as he cut the long stems.

Volunteers like Neu snips and prunes, trimming any faded blooms to give these beauties a second chance.

“I like the end result as these flowers are all given to people who are shut-ins or may not have any visitors,” Neu said.

Another team of volunteers assembles bouquets, then they head out for delivery.

In central Indiana, Random Acts of Flowers volunteers make the rounds to more than a dozen area hospitals and nursing homes.

“These are lilies so you're going to be able to smell those,” a volunteer said to a patient during a delivery at Traditions at Solana Senior Living.

“No doubt the patients need the help of their nurses and the doctors, but there's really something about lifting someone's spirit mentally and to let them know that someone really cares about them. That's the most rewarding part,” Neu said.

Bright and beautiful, cheerful and colorful, there are hundreds of ways to describe them.

“It brightens the day. It sure does,” Hedge said.

“It's a shocking reaction. It really is. No matter where you go,” Neu said.

Kroger is just one donor, and already, they're looking to expand.

“What we really like about Random Acts of Flowers is just what they stand for. They're really offering hospitality to people; they are uplifting people in a time of need,” Fair said.

And for people like Wanda, the free surprise is priceless.

“I wasn't too good of a gardener because the rabbits kept eating up flowers,” Hedge said. “It makes you feel kind of special when they bring those in. You know someone is really thinking about you and that means so much when you sit here day after day.”

He received dozens of flowers and noticed how some other patients did not, so he started Random Acts of Flowers in 2008.

Since its founding, the organization has expanded with chapters in Tampa Bay, Chicago, and Silicon Valley. The Indianapolis chapter opened in the fall of 2016 and has attracted nearly two hundred volunteers in that time.

The organization relies on floral donations from florists like Kroger, as well as people who may have fresh flowers they no longer want or need.

Donations of vases and time from people who are willing to deconstruct flowers, make bouquets, and deliver them are also needed along with monetary donation. To learn more about Random Acts of Flowers, click here.