​While bullying is nothing new, parents say it's getting more violent and some of their children fear going to school.​ 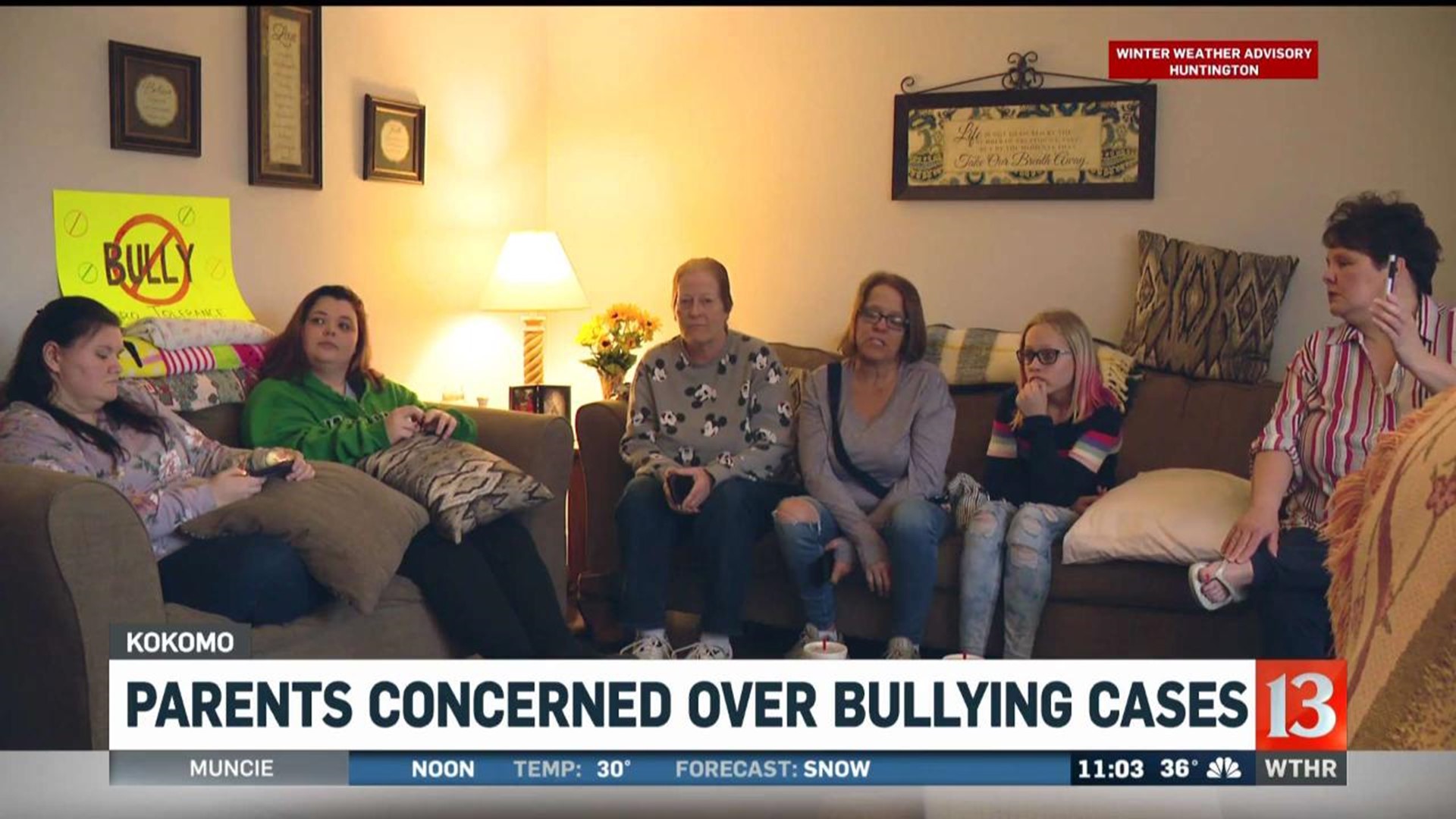 KOKOMO, Ind. (WTHR) — Dozens of parents in Kokomo say their children are being bullied in school.

Some of the children are as young as 6 years old.​

​While bullying is nothing new, parents say it's getting more violent and some of their children fear going to school.​

​"It's scary when you send your kid to school and they're supposed to be safe and they come home with bruises or bald in the back of the head because someone wants to be a bully," said Leanna, mother of a 13-year-old. ​

​Kasslyn, 6, came home with a busted lip last week. Her mother, who did not want to be identified, said Taylor Elementary School leaders did call to alert her after the incident.​

Kasslyn said a boy pushed her from behind while she was waiting to board her school bus.​

"He grabbed my backpack and he threw me on the tile," she said while being comforted by her aunt. ​

"It knocked the air out of me," Kasslyn said. ​

​She said this wasn't the first time.​

"He pushed me a couple other times before making me get out of the way or something," said Kasslyn. ​

​Smith was among at least 20 parents calling on school leaders to do more to address multiple bullying complaints.​

​In a statement to Eyewitness News, a spokesperson from Taylor Community Schools wrote:​

Near the end of the school day on February 20, 2020, that Taylor Elementary Principal learned of an incident involving a student. Upon receiving the information, the Principal immediately informed the student's parent. This incident has been investigated and all appropriate action has been taken to address the situation. Since that time, Taylor Community Schools has learned that parents have concerns about bullying that is allegedly occurring in the Taylor Community Schools. The safety and well-being of students is paramount to the Board of School Trustees and administration of the Taylor Community Schools. The Taylor administration stands ready and willing to meet with parents to discuss their bullying concerns. ​

​Parents say it's not just one incident, but multiple cases.​ They want a policy explaining how to hold bullies accountable.​

​"We have no guidelines to know what happens when kids bully," said Smith. ​

Several parents emailed Eyewitness News disturbing details of what they say their children have experienced.​

​Donna wrote: "My daughter is in the second grade and has been bullied this whole school year. Monday Feb. 24th She had post it notes, (the bully) and told the other classmates, she was going to write 'kick me' and 'kill me' and put it on my daughters back. They (students) told the teacher and I wasn't informed and nothing was done." ​

Donna also has a son in second grade.​

​"He had a student stab him in the arm with a spork, so my son snapped it. Then the boy punched my son in the mouth, and busted my son's lip open. I did get a phone call, they only called because my son was coming home bloody with blood on him and his shirt."​

Christina wrote: "My first grader is now in therapy because of the stuff he has been through. He has been slapped, choked. punched, kicked, & scratched all. I informed the school about every single problem & they brushed it all off. They told me they handled it but never actually did."​

Nova wrote: "My daughter is 5 years old in kindergarten. Kids have spit in her mouth causing her to throw up. We went to the school over 10 times about all this and they believe since she didn't come to them about it then it didn't happen." ​

​Margaret wrote: "My son (in first grade) came home with a black eye two weeks ago from this student throwing him against a desk. I have days where I don't feel like my son is as safe as he can be and I hate that. I feel like the teachers and students are being pushed to the way side and bullies are being protected."​

According to the Indiana Department of Education, during the 2018-2019 school year, Taylor Community School Corporation reported no incidents of bullying at the elementary school and four incidents at the middle school, a statistic parents say is inaccurate.​

​Kasslyn's message to her bully?​

"I would tell him not to do that anymore because it's rude," said Kasslyn.