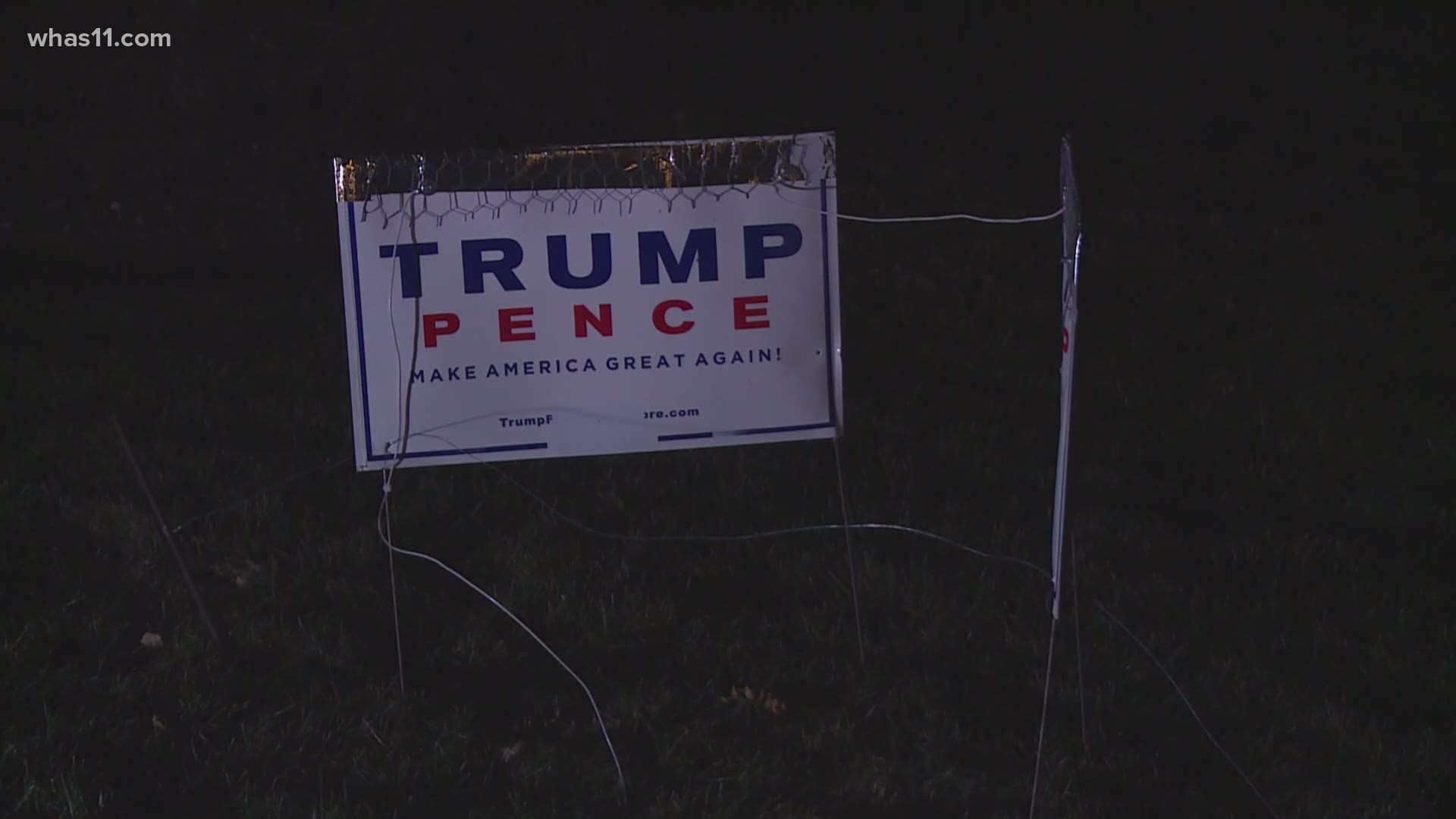 LOUISVILLE, Ky. — Were they protecting freedom of speech or creating a neighborhood hazard? The answer depends on who you ask. A Louisville neighborhood is buzzing after two residents electrified their political signs, they say, to keep them from being stolen. Both residents are fans of President Donald Trump.

“It's a fence charger that I had up in 2016,” Walter Francis explained. “But that's all they (thieves) would get would be a shock.”

An electrical current flowed through his sign of political pride and signs just around the corner at Shirley Borowick's place.

“In 2016 we had 3 or 4 signs stolen until we put electricity on them and they were left," Mrs. Borowick explained. “So, we figured this time we would just put the electricity on to begin with without having them stolen.”

Mr. Francis says he had 6 signs stolen in 2016 and was not going to let it happen again.

An electric fence box hangs from a tree in his front yard, up the line from two signs. Shirley and Walter hoped that a taste of juice would leave an impression on anyone considering stealing their power-packed message.

They were, indeed, not stolen as of this week. But someone in the Stone Lakes subdivision complained and that short-circuited the conservative neighbor’s plans.

Someone called the police, so Shirley added an additional warning that read, “No trespassing! High Voltage!”

That's when the fire department made a visit. Posts about the sight lit up a private community group and the H-O-A sent a note telling both families to disarm the campaign ads. Both say that they since pulled the plug. But they insist this isn't about the electricity rather it's an attack on free speech and their chosen candidate.

“A few days ago, through our neighborhood’s official Facebook page, we were made aware of two (2) homes in our neighborhood which had campaign signs in their yard, which campaign signs were wired to a live electrical current. These displays were designed, presumably as a deterrent to anyone who might attempt to steal the signs, to provide an electrical shock to anyone who might come in contact with the signs.

The Board of Directors of Stone Lakes Homeowners Association, Inc. takes their responsibilities as board members very seriously, and no single subject is of greater importance to the Board that the safety of their neighbors. After the Board made a determination that a nuisance, as well as a dangerous situation with the potential to cause injury to anyone who might come in contact with the signs existed, letters were mailed by the HOA’s attorney to the two (2) sets of homeowners where the signs in question were displayed. The content of the campaign signs in question, did not factor into the Board’s decision to send the letters to the homeowners. The residents were not demanded to remove the campaign signs, but only that they be disconnected from any electrical power source, so as to alleviate any concerns of injury to any person or pet.

In an October 8th phone call, the HOA’s attorney again clarified to one (1) of the homeowners that the content of the campaign signs was not an issue, and that the campaign signs could stay, so long as they were disconnected from the electrical power source, and so long as a third hand-written sign which read “No Trespassing!! Stay Off High Voltage!! Stay Off” was removed from the lot to alleviate perception of danger. The Stone Lakes HOA Board has no interest in attempting to infringe on anyone’s freedom of speech. Stone Lakes is a safe and friendly neighborhood, and the Board took action to ensure that it remains safe and friendly for all residents and visitors.”

Shirley and Walter say their signs are staying through the election. He has a new message to would-be thieves.

“If they were to get caught on my lawn trying to take my signs, they might have a problem”, he said.

RELATED: Voter Guide 2020: Everything you need to know about voting in Kentucky

Make it easy to keep up-to-date with more stories like this. Download the WHAS11 News app now. For Apple or Android users.