Is John Dillinger buried in Crown Hill Cemetery? His relative weighs in

"Unless somebody was successful in robbing the grave, that’s John. I know that that’s John." 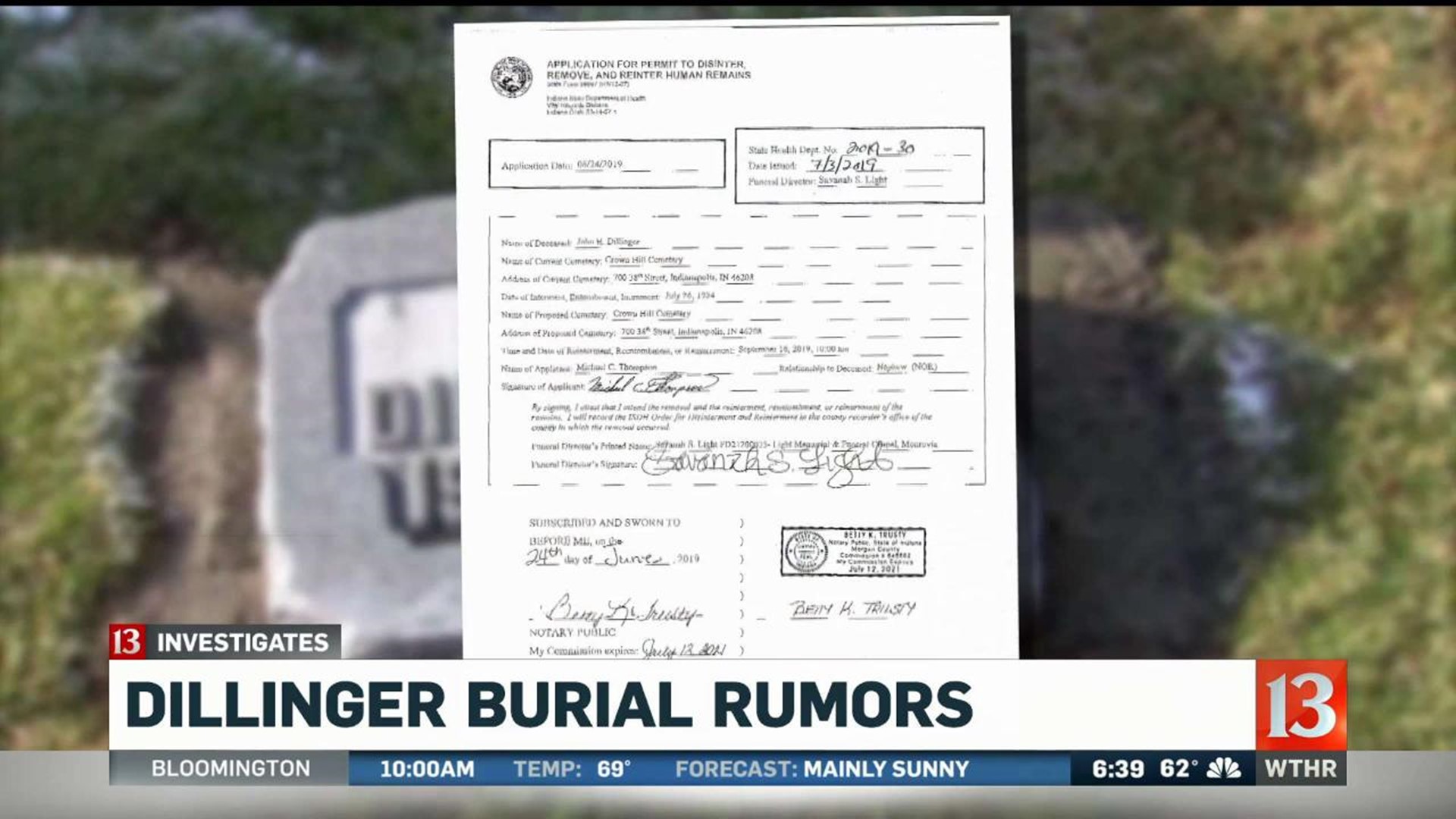 MOORESVILLE, Ind. (WTHR) — Is one of America's most notorious bank robbers, John Dillinger, buried in Indiana in Crown Hill Cemetery? Dillinger's great-nephew thinks he is, but 13 Investigates learned a production company out of California wants to find out for sure.

The application for a permit to exhume is all ground work for an upcoming documentary on the History Channel. It's a mystery they're hoping to solve. Is there even a body in that grave? And if there is, is it John Dillinger?

His great-nephew, Jeff Scalf, believes John Dillinger is buried in Crown Hill Cemetery and thinks this whole attempt to exhume the body is disrespectful and shameful.

Scalf lives in his great-uncle's childhood home in Mooresville. He recalls countless stories about his family and the man known as "Public Enemy No. 1."

"My grandmother, who was John senior's confidant, always told me from when I was young we do not romanticize John," Scalf said. "We do not vilify John. What he did was wrong. There was no honor in stealing, but he was her brother. She loved him, and more importantly she said he was not a killer. He was not mean spirited. He was not vicious. He never initiated gun fire, and in fact, what he said is if they had to fire a bullet during a bank robbery they had failed in their planning."

Scalf knows Dillinger's life fascinates people. He says he has denied several previous requests to exhume Dillinger's body. His cousin, Mike Thompson, is the one who applied for the permit with the Indiana State Department of Health back in June to remove Dillinger's body from the grave. Scalf said they had a falling out and don't talk anymore. Scalf also said he had nothing to do with submitting this recent request to exhume. He calls it disheartening.

"I don’t believe in desecrating the dead," said Scalf. "I think it’s been 85 years. It doesn’t matter. The story is what the story is."

Scalf says he doesn't see a benefit to exhuming Dillinger because he knows Dillinger's body is in that grave in Crown Hill Cemetery.

"Unless somebody was successful in robbing the grave, that’s John. I know that that’s John" Scalf said.

13 Investigates stopped by Thompson's house. He said he could not comment on anything pertaining to the permit. The permit lists a date in September for reinterment. 13 Investigates is now being told this isn't necessarily happening in September and that some other permits still need to be approved.

A Monrovia funeral director is listed as the person overseeing the disinterment. Savanah Light, with Light Memorial and Funeral Chapel, couldn't be reached for comment on the permit filing. A person in the funeral home's office said they are not releasing any further information. Crown Hill Cemetery also would not comment.