No matter where you access IndyGo’s new Red Line service, a bus is supposed to pick you up within 10 to 20 minutes. 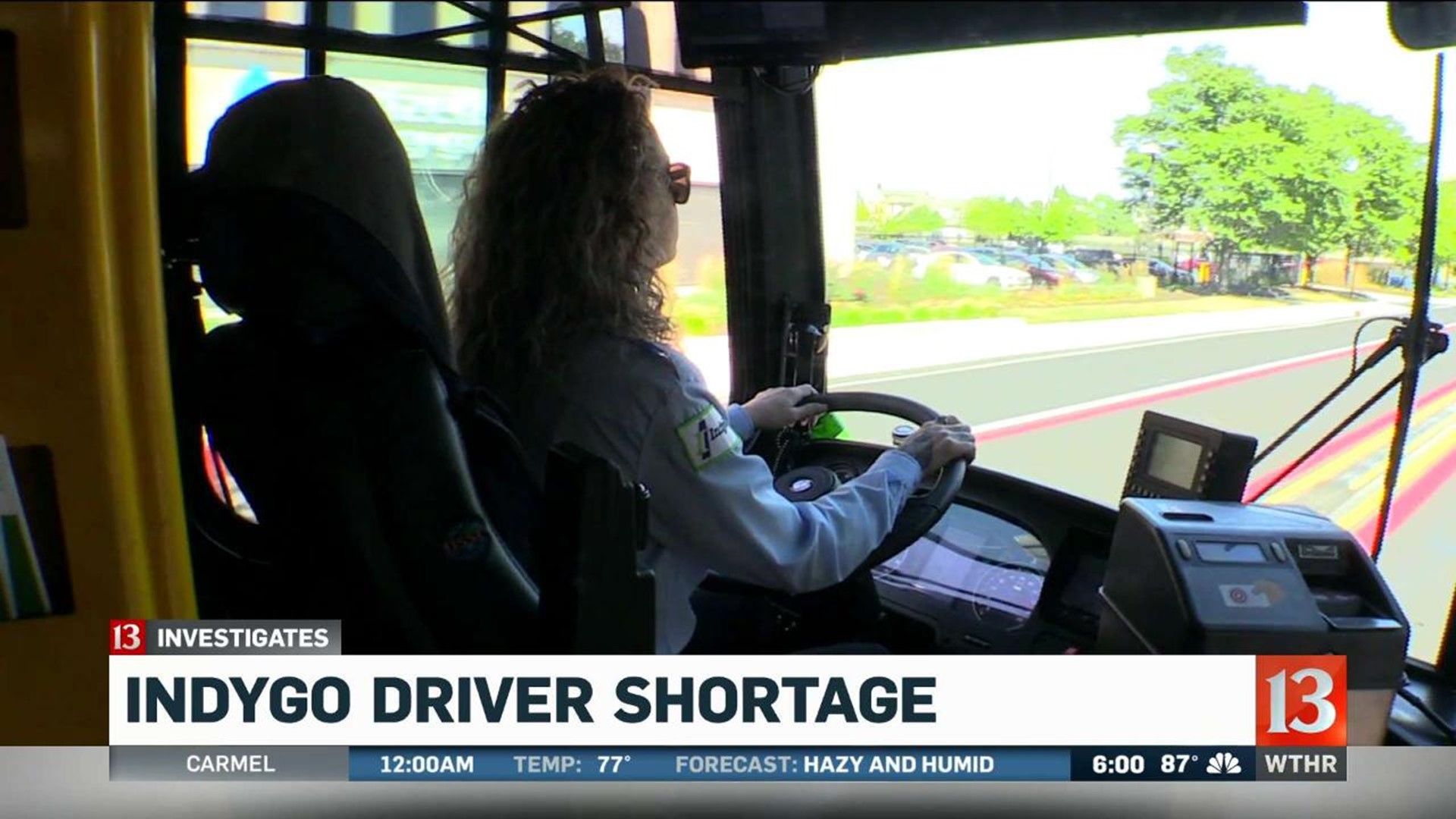 No matter where you access IndyGo’s new Red Line service, a bus is supposed to pick you up within 10 to 20 minutes.

But Roland Lolla says some of his wait times have been much longer.

Some IndyGo buses sit idle during their routes because there is no driver to drive them. (WTHR/Bob Segall)

“Friday and Saturday night of last week, the bus was over an hour late both nights,” Roland told WTHR while waiting for a Red Line bus. “I don't know why the buses were late. They're supposed to be every 15 minutes, so it’s kind of crazy.”

Lolla, who has been riding the Red Line since it launched earlier this month, is not the only passenger to notice an ongoing problem plaguing IndyGo. 13 Investigates has learned the transit system has been battling a driver shortage – now made worse by the addition of new service. Despite adding 17 new drivers last week, IndyGo admits its staffing levels still fall short of the minimum 408 drivers that transit leaders say they need to keep the bus system running smoothly. At times, the shortage is having a severe impact on service.

Last Saturday, for example, eight buses were scheduled to operate along the Red Line. But only four bus drivers were available to work the route, reducing Red Line service by 50%. Half the number of buses meant maximum wait times along the 13-mile route would at least double from 15 minutes to 30 minutes. In reality, some wait times were considerably longer than that. Riders like Lolla waited for their “rapid transit” buses for 60 minutes or more.

Luellen says the driver shortage means when drivers call in sick and there are no back-up drivers available – exactly what happened last weekend -- riders will feel the impact.

“We had exhausted all of the regular staff that were on standby to fill in the open work,” he explained. “Staffing is going to continue to be a challenge. We have about 400 drivers right now and in June of next year, we're going to require about a 100 more drivers.”

According to Luellen, about 25 newly-hired drivers will complete required training next month, around the same time that IndyGo will need dozens of new drivers on the road to accommodate schedule changes that will take affect across Marion County. At that time, the transit system still expects to be slightly below its target staffing levels.

“We’ve been hovering pretty close to the minimum number of drivers we need. As we get more people through training, we expect to have a better buffer but, at the end of the day, there just aren’t enough drivers available,” Luellen told 13 Investigates.

With low unemployment, employers like IndyGo are competing for a limited number of workers in a highly competitive job market. Transit system leaders say they are aggressively recruiting new drivers with a generous benefits package and a starting wage of $16 per hour, which increases to $19.50 after eight weeks of training and $23.25 after two years of service. Many new drivers do not stay with IndyGo for a long time.

“We have a seniority based system and the newest operators [drivers] are working the late-night shift and weekends, which makes it difficult to hold on to people,” Luellen said.

Daytime shifts tend to attract more experienced drivers who have earned seniority by working for IndyGo for many years. As a result, those routes often run most efficiently. Friday afternoon, wait times along the Red Line were between two and eight minutes – well below the 10-minute weekday target set by IndyGo. Red Line buses are supposed to arrive at each stop every 15 minutes during late evening and weekend hours. The target time increases to 20 minutes on Sunday nights between 8:00 and 10:00.

Other problems affecting the Red Line include technical issues with new GPS systems on the buses. Due to an unexpected software problem, ticket vending machines that were supposed to be operational by October 1 will not be in service until mid-November. But delays are mostly attributed to the transit system’s ongoing driver shortage, which shows no signs of going away.

Riders like Lolla are now dealing with the consequences.

“You tell me you’re going to have buses every 10 to 15 minutes? Nah. I don’t think they thought this through,” he said.

To compensate for riders’ inconvenience, IndyGo is extending its Red Line free ride program. IndyGo CEO Inez Evans and the IndyGo board of directors announced the Red Line will be free to all riders through November 10.

“We want to make sure we’re correcting for those challenges,” Luellen said. “We want to show people we are dedicated to the service and making sure they have a great experience.”

IndyGo says anyone interested in becoming a bus driver can apply online at IndyGo.net.