An Indianapolis man says he was seriously injured while riding an electric scooter near downtown. 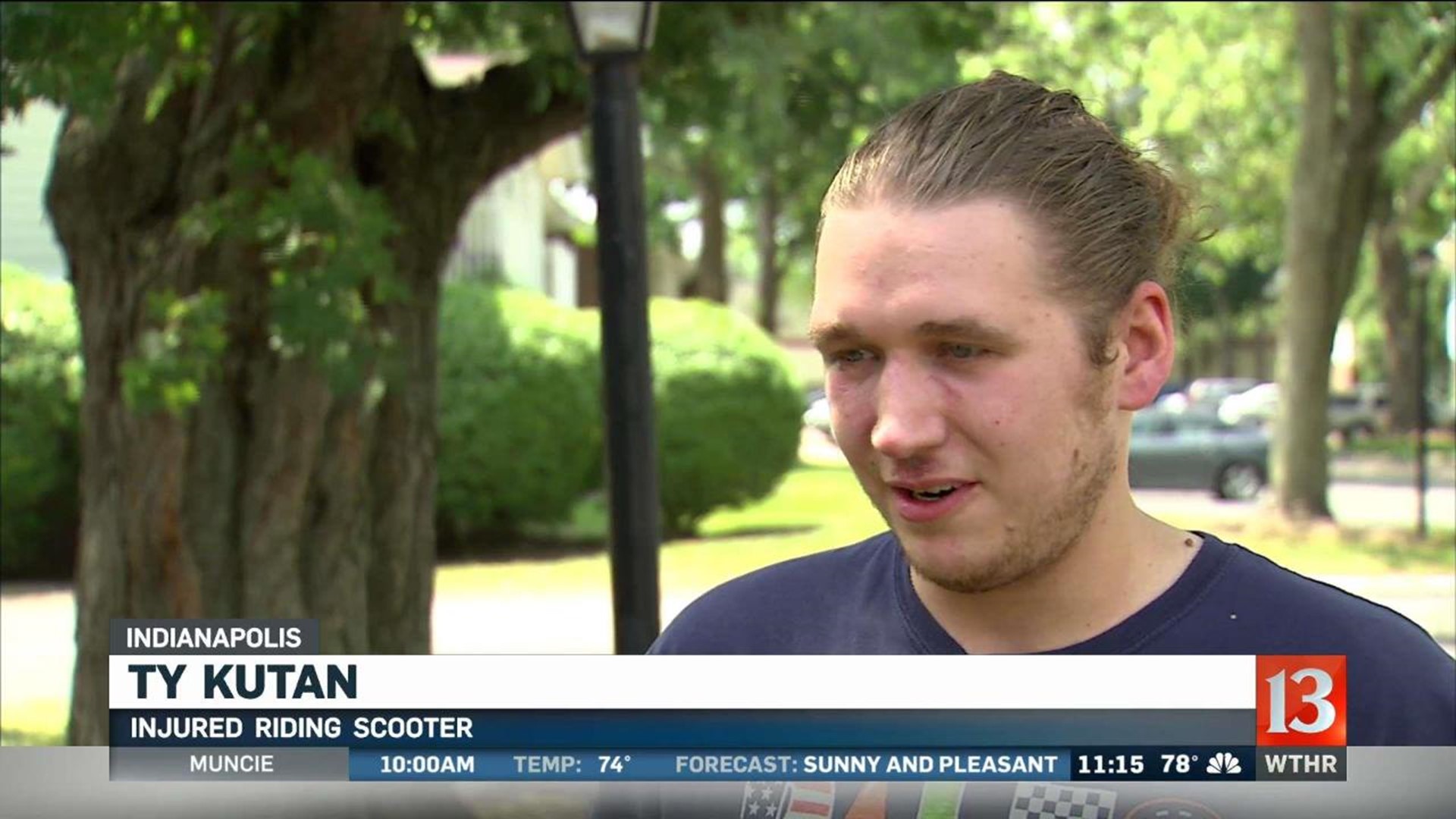 INDIANAPOLIS (WTHR) - An Indianapolis man says he was seriously injured while riding an electric scooter near downtown.

The incident is adding to questions about scooter safety for the vehicles that have become very popular in Indianapolis over the past couple of weeks.

As soon as he saw them zipping around town, Ty Kutan had to try an electric scooter. He said they seemed fun. He ended up riding Lime and Bird scooters quite a bit.

"And they are fun," Kutan said, "until you face plant off one!"

He says a recent ride on a Bird scooter ended with severe injuries to his face. He says he hit a small pothole in a puddle near 22nd and Meridian while going 15 miles an hour.

"I hit that, fell face first into the puddle," Kutan said. "I look down and just see blood all over me trying to figure out how bad it is."

Doctors at St. Vincent Hospital confirmed it was bad.

"A broken orbital bone and uh...a cut here that needed five stitches, 12 total," Kutan said. "I was not wearing a helmet."

On the app, the company offers to send people a free helmet if they pay shipping and handling. But it says they can only get a free helmet after they ride the scooter at least once. The company has no way to verify people actually wear helmets.

Take a look downtown and it appears most riders don't.

Joseph Aragon and Avory Chavez are visiting Indianapolis from New Mexico and decided to ride a Bird. They didn't wear helmets.

"Helmets - it says you should wear one, but..." Aragon said, as Chavez laughed.

"I never see anyone wearing a helmet when they do ride them," said John Howe, who does wear a helmet while riding his bicycle downtown.

Howe says he saw someone get hurt on a scooter a couple weeks ago.

"She landed on her face, on her head, and got up bleeding and screaming and crying. They were drunk, all three of them. She's like, 'I told you should have worn helmets!'" he said.

"Maybe there should be a helmet connected to the...to the scooter," Chavez suggested.

Lime pulled its scooters, but Bird's are still on the streets.

"I applaud Lime for taking them off of the streets with the cease-and-desist and I don't think it's cool that Bird's leaving them on," Kutan said. "There's no rules they're breaking, but there's no rules to follow yet."

Until there are better rules, Kutan is afraid people just don't know the risks.

"No," he said. "I mean, I didn't realize I was going to be spending seven hours in the ER."

On Monday, the City-County Council will talk about regulating scooter companies with a proposed ordinance.