Sports fanatic and Purdue University alumnus Tyler Trent inspired the Boilermakers community and quickly captivated the rest of the nation during his courageous battle with a rare bone cancer. His fight with that cancer sadly came to an end January 1 but his legacy continues to live on. 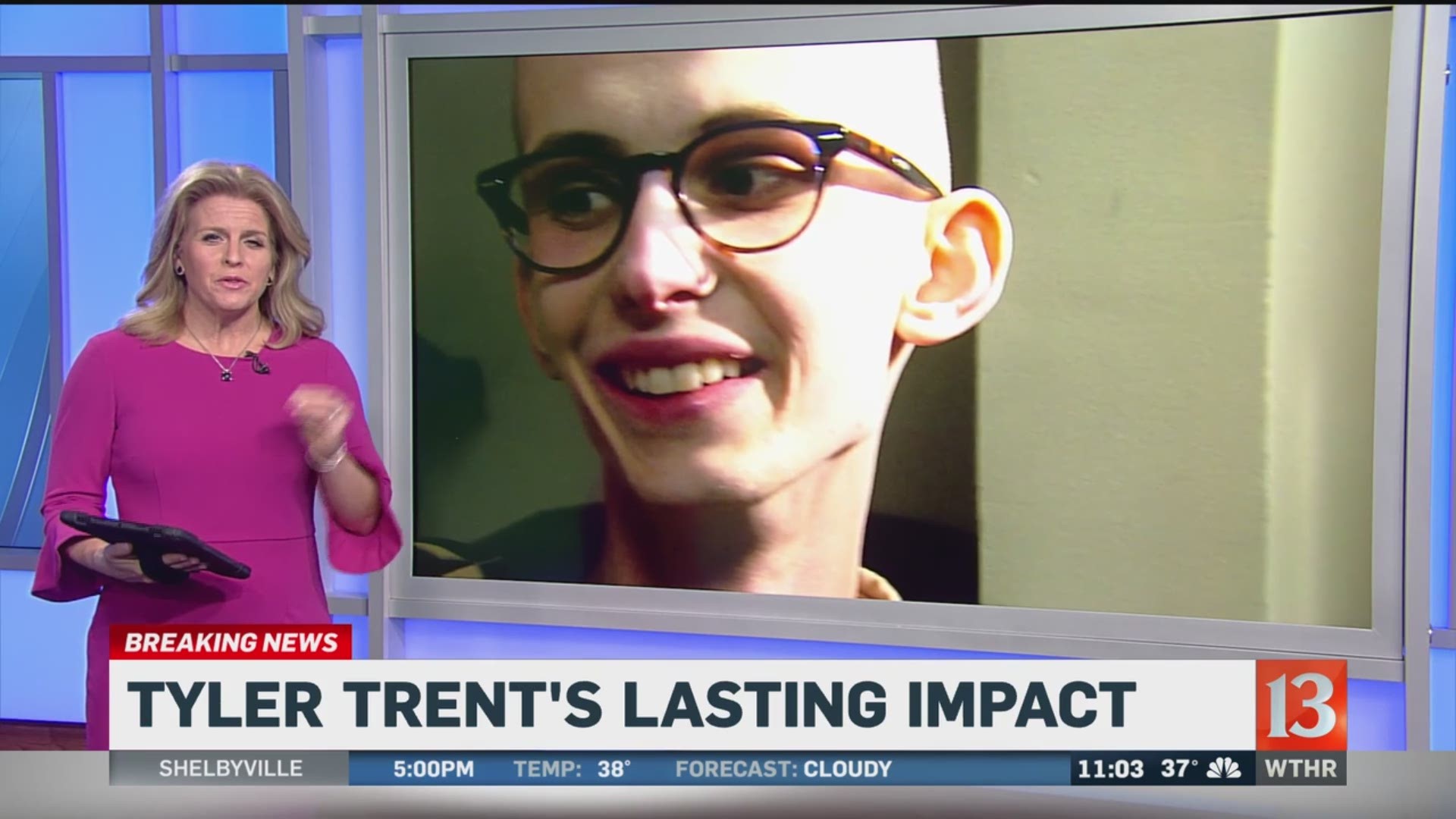 CARMEL, Ind. (WTHR) – Sports fanatic and Purdue University alumnus Tyler Trent inspired the Boilermakers community and quickly captivated the rest of the nation during his courageous battle with a rare bone cancer.

The Purdue sophomore touched many people with his faith, courage and attitude during his four-year battle with osteosarcoma. The rare bone cancer led to shoulder reconstruction in 2014 and pelvis reconstruction in 2017 just before he started college. Another tumor developed on Trent's spine earlier this year and can no longer be treated.

When Tyler announced that he could not return to Purdue, a few hundred people gathered outside his home in Carmel and sang for about a half-hour and held handmade signs with bible verses and encouraging messages while Tyler sat in a wheelchair on the front stoop surrounded by his family.

Tyler was awarded his degree, the football team delivered a game ball from a win at Nebraska, and he received the inaugural Purdue Alumni Impact Award.

The Boilermakers’ huge upset over the 2nd ranked Ohio State back in October was not only a turning point for the football team, but also for Tyler.

The football team made him an honorary captain for their game against Northwestern and the school honored him with the inaugural Purdue Alumni Impact Award.

The exposure of Tyler’s inspiring story on the national television broadcast impacted lives around the country.

Soon after, big names in the sports world were taking the time to meet Tyler in his bedroom in Carmel.

Colts kicker Adam Vinatieri stopped by to show his support and encouragement.

Then Tyler fulfilled another dream, appearing on ESPN's SportsCenter with Scott Van Pelt.

After seeing Tyler on SportsCenter, Cubs pitcher Jon Lester tweeted at Trent, offering to host him and his family at Wrigley Field for a game next season.

Tyler also became a new voice at Bankers Life Fieldhouse, sitting side by side with Mark Boyle and Slick Leonard during the Pacers’ home game against the Houston Rockets.

Among all the recognition from the sports world, Tyler also received one of the state’s highest honors.

Tyler Trent was awarded one of the state's highest honors after he raised more than $100,000 for pediatric research at Riley through this year’s Purdue University Dance Marathon. (Photo provided by Riley)

Another powerful moment – when Tyler broke down in tears as the auditorium rose for a round of applause in his honor. On December 6, Tyler was honored on ESPN’s College Football Awards show. Tyler was awarded the Disney Spirit Award during the show.

By this time, Tyler had a major collection of sports memorabilia – complete with his own bobblehead! And of course, for each bobblehead purchased, $5 will be split between two charities of Tyler's choosing — the V Foundation for Cancer Research and the Tyler Trent Cancer Research Endowment.

The bobblehead is available for purchase at BobbleHeadHall.com.

"We were thrilled that Tyler loved the idea for a #TylerStrong bobblehead as much as we did, as we think it’s the perfect way to honor him while also raising funds for cancer research and increasing awareness about cancer,” said Phil Sklar, Co-Founder and CEO of the National Bobblehead Hall of Fame and Museum. “So many people across the world have been touched by Tyler’s story and we think this bobblehead is the perfect way to celebrate Tyler and everything he stands for!”

To add something a little different to his collection, Tyler was sent a letter from President Trump along with an American flag that flew over the Capitol building and a signed photo of the Capitol from Congresswoman Susan Brooks.

The letter from President Trump said:

“Melania and I were moved by the courage and determination you have demonstrated over the course of your illness. Please know that we are keeping you and your loved ones in our thoughts and prayers.

As you face this challenge, we hope that you continue to find comfort and strength in your faith, family, and friends. The resolve and tenacity you have demonstrated during this brave battle are inspiring. Please know that we are ALL Tyler Strong!

May God bless you.

Tyler made his fight with cancer much more than a fight for his life. He fought for everyone else battling cancer, too.

Tyler raised an individual fundraising record of more than $101,000 for the Riley Dance Marathon for cancer research. But his greatest donation for the cause may be his tumor.

"He has number one really given a voice to young folks in the state of Indiana who have cancer," said Karen Pollok, Wells Center cancer researcher. "He has provided really a forum for discussion. He's really going to leave a legacy in terms of how we talk about cancer and how we discuss it with families."

Riley Children's Foundation, along with Tyler and his family, have created the Tyler Trent Cancer Research Endowment for Riley Hospital. You can donate here.

This is in addition and separate from the cancer research endowment already started at Purdue.

The Tyler Trent Courage and Resilience Award will be given to a undergraduate students attending Purdue's West Lafayette campus who have experienced adversity in their journeys to higher educations.

Students in any major and year are eligible. The first scholarship will be awarded in 2019. Students can either nominate themselves or be nominated by others.

For more details on the scholarship and how to apply, click here.

Just four days before Tyler’s passing, he was able to make one last show of support for his team, making the trip to Nashville, to cheer on the Boilermakers in the Music City Bowl.

Tyler and his family flew there on Colts' owner, Jim Irsay's private jet where he was surrounded by his parents, brothers and grandmother.

And then perhaps the most tragic way to begin 2019, Tyler passed away on January 1 at the age of 20.

When the sad news came across social media, condolences immediately poured in for a soul that touched so many.

“Tyler Trent was among the biggest, strongest and wisest people you could ever meet. He reminded us what being good is all about. I’m convinced Tyler was touched by our Lord and guided home every step of the way. Janet and I send our love to the Trent family and remain here for them.”

“Heaven has another great Boilermaker tonight. Thank you, Tyler, for all you taught us and the inspiration you left us.”

Tyler’s legacy and push for cancer research will live on.