The head of the state's largest teachers union says they will press lawmakers for an increase in teacher pay during the upcoming session, even though it's not a budget year. 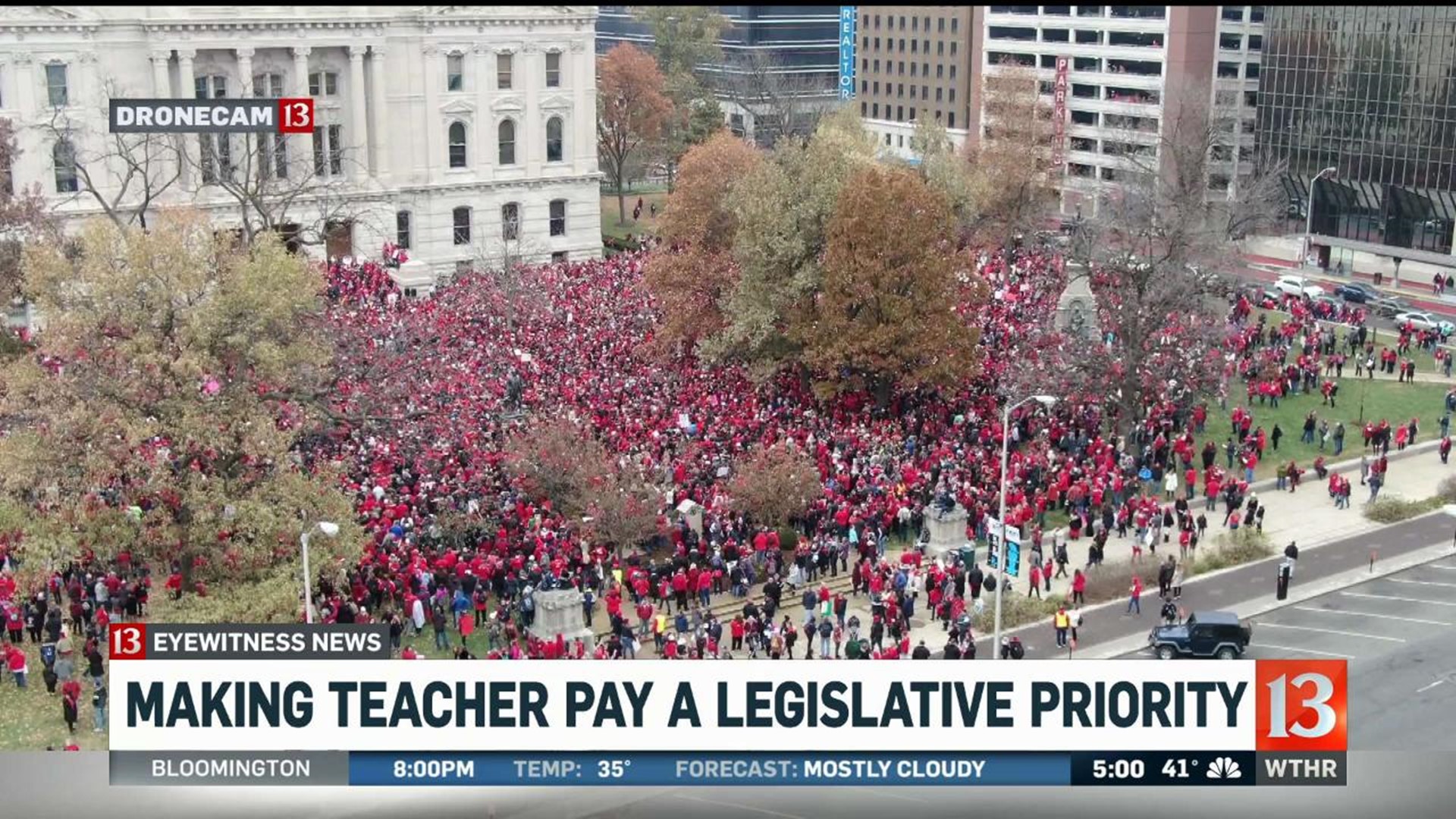 INDIANAPOLIS (WTHR) - The head of the state's largest teachers union says they will press lawmakers for an increase in teacher pay during the upcoming session, even though it's not a budget year.

Keith Gambill, president of the Indiana State Teachers Association said, "to think we can wait a year and be closer to meeting that goal is short-sighted. If we're honest and we're going to make a difference in this, we need to be doing it now...I get it's a short session, it's not a budget year...but they have the ability to act."

He said that's because the state has taken in $400 million more than projected, "and we believe a portion of that, $75 million. should be used as a good-faith down payment on helping to advance salaries for educators."

ISTA laid out its legislative priorities less than a month after thousands of educators descended on the statehouse for a "Red for Ed" march and rally. Other issues on their legislative agenda include holding teachers harmless from ILEARN scores, repealing new teacher licensure requirements and providing more counselors for students.

Michelle Hine, a 6th grade teacher in Wayne Township who attended the Red for Ed Day. said she is glad to see the momentum continuing. She said upping base salaries is especially important.

"We want to attract the best and brightest and right now the numbers are sad," Hine said, referring to the decline in the number of college students studying to become teachers.

But ISTA's call for "a $75 million down payment" to provide an increase in teacher pay will likely face an uphill battle. Eyewitness News reached out to the House Democratic and Republican Caucuses. (Republicans control both the Indiana House and Senate)

"Indiana House Democrats support giving teachers a pay raise now and our caucus will work to do that during the upcoming legislative session. If there is enough money for a new swine barn at the Indiana State Fairgrounds then there is certainly enough money to give Hoosier teachers the pay raise they deserve right now. The General Assembly can and should continue this conversation in 2021 to come up with a long-term plan for a teacher pay increase and more funding for traditional public schools—which House Democrats believe is the root cause of the teacher pay issue—in the state budget."

And this was the response from State Rep. Bob Behning (R-Indianapolis), chair of the House Education Committee:

"It's a nice talking point to say the state's reserves should be used to increase teacher salaries, but this would be the same as using a Christmas bonus to purchase a larger home. The mortgage will outlast the bonus. If the decision is made to open the budget, the plan would be to pay cash for one-time projects, which will save taxpayers more than $120 million. Those savings can then be used during future budget cycles to continue making long-term investments in our priorities like education."