A man and woman from Edinburgh were arrested Sunday night after they crashed into house in Columbus. 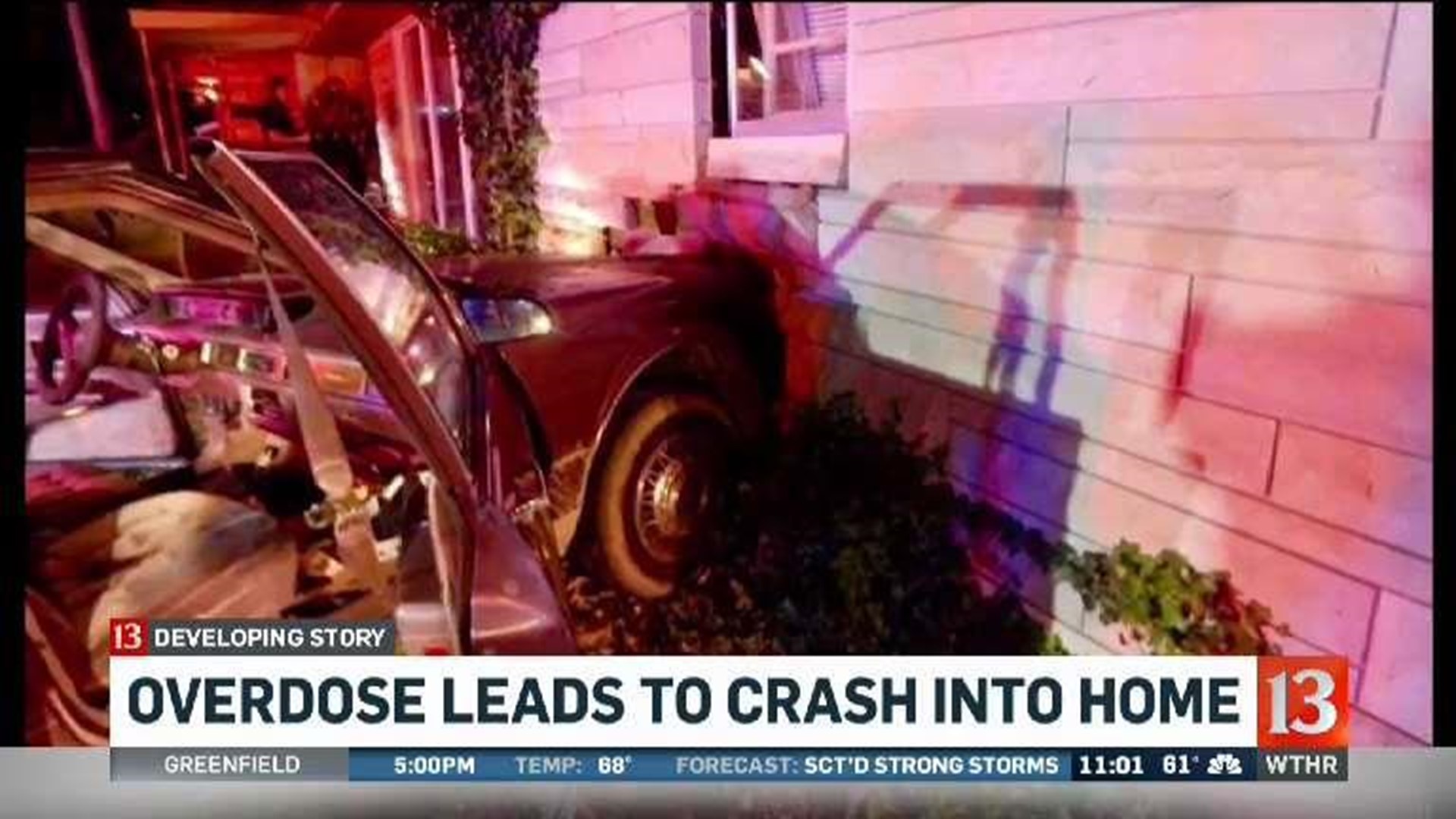 COLUMBUS, Ind. (WTHR) - A man and woman from Edinburgh were arrested Sunday night after they are believed to have overdosed on heroin and crashed into house in Columbus.

Twenty-one-year old Dillon Goff was driving the car in the 2900 block of 19th Street in Columbus when it left the roadway and crashed into a residence.

"I have a recliner right there in that middle window and that's where I sit. Watch TV," says Arnie Bunch of Columbus.

And that's just what Arnie was doing Sunday night when suddenly...

"I was behind him when he just swerved over and went into your house," says Andy Ash, a witness.

Arnie says, "Suddenly I look out and there was two headlights and I thought to myself my god they're in my yard." And in seconds they were partly in his house. About 10 feet from where he was watching TV.

Police officers arrived and found Goff and his passenger Samantha Artis, 21, unconscious with blue lips and labored breathing. Officers suspected the couple were suffering from an opioid overdose and administered naloxone to both them. They regained consciousness and were taken to Columbus Regional Hospital for further treatment.

Arnie says "it was just a loud boom like, you know. Just kind of shook everything. And I thought my God. I jumped up ran out here. I was kind of like in shock or something. And the car was still setting here running."

He was worried about the people inside and opened the car door. Where he found Goff behind the wheel, unconscious and Artis, also unconscious.

Arnie says he wanted to help but wasn't sure what to do so we called 911. Police and fire fighters say that turned out to be the right step. He could've been in danger reaching into the car.

"He said it's a good thing you didn't because there were two uncapped needles right there in the seat you could have stuck yourself with," says Arnie.

Police say the two had overdosed on heroin. Both were revived when first responders dosed them with the antidote drug Naloxone.

The witness who was driving right behind the car told us Goff wasn't driving erratically. Arnie asked witness Andy Ash, if Goff "tried to put on his brakes or anything like that?"

Ash says no. It appeared Goff "was out cold. He looked like he was sleeping through it, you know what I mean? Probably split second."

Around the country numerous cases are cropping up of drivers overdosing behind the wheel. A web search shows many barely leave their meeting with the drug dealer and they're shooting up. Sometimes striking buildings. Sometimes dying in their driveways.

Columbus Police Lt Matt Harris says, "That is something we are seeing an increase of here in the state of Indiana, (and) dealing with."

Arnie showed the damage inside home office. The window frame loose from the house, holes and cracks showing the insulation.

"Right here, you can see outside, of course. It just cracked this all the way out."

He's glad the people in the car survived. He's also glad what's in the next room survived. His record collection.

Arnie says, "I've been collecting records really all my life. I bought my first album when I was 12 years old. I'm 72 now. I just love music."

Harris says call 911 if you see people unconscious in a car. Don't reach in. They could have a weapon or there could be syringes inside. You could poke yourself with them. Or just inhaling The drug fentanyl could kill you.

Goff and Artis went to the Bartholomew County Jail after they were discharged from the hospital.