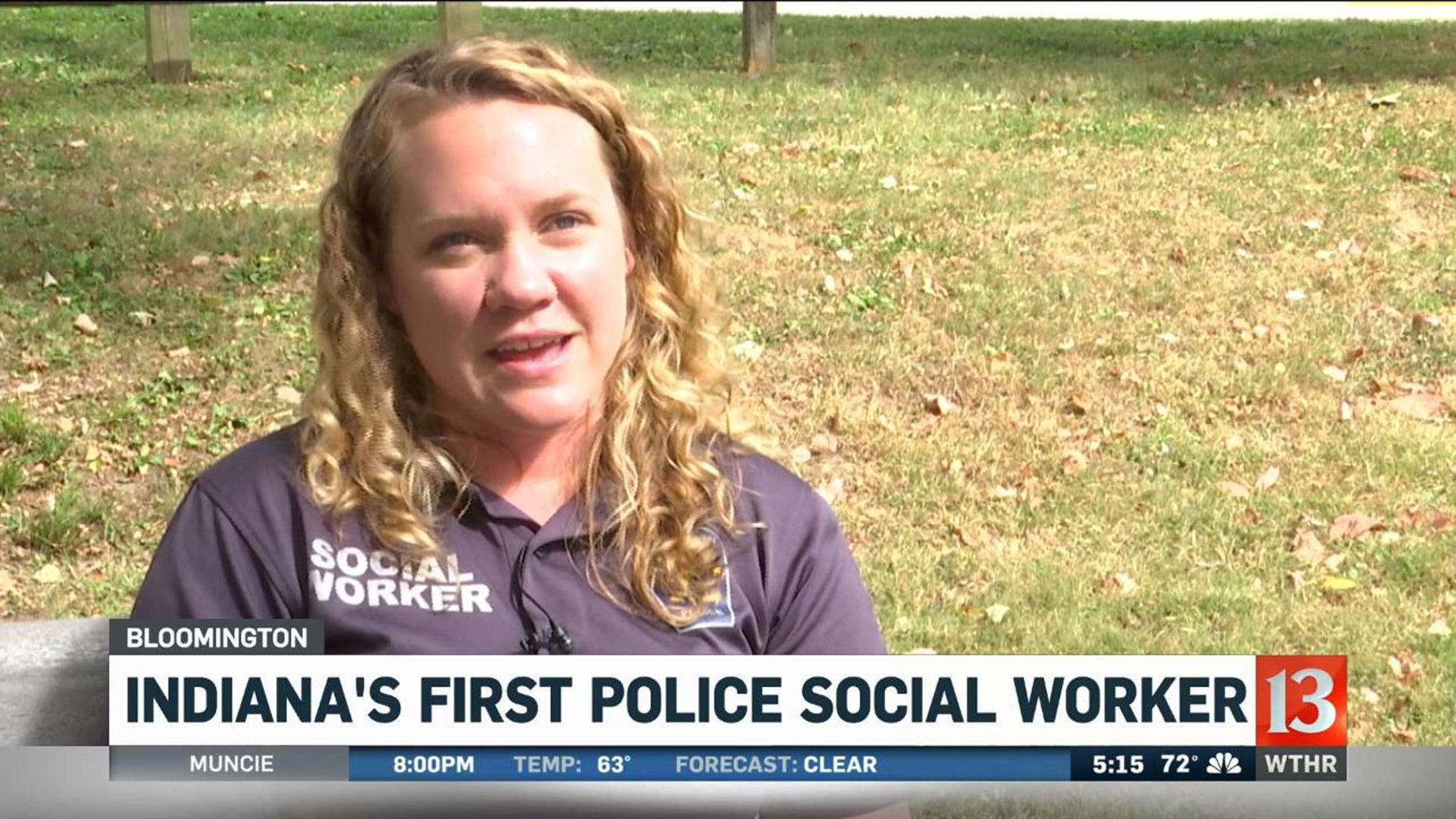 BLOOMINGTON, Ind. (WTHR) – One of Indiana’s first police social workers is on the job.

She doesn’t carry a gun but she is part of the police department.

Adding a social worker to the police department was something Bloomington’s police chief said had to be done.

“Police officers respond to the call, take the call and then they’re done,” said Bloomington Chief of Police Mike Diekhoff.

But the chief said substance abuse, homelessness and mental health are generally repeat calls. Which is one of the reasons why Bloomington created a force focused on answering these calls.

“Our downtown resource officers are a group of officers and that’s basically the calls they respond to," said Chief Diekhoff. "And they will proactively check out those calls, like at homeless camps, to make sure everything is ok."

He added that people with mental issues and homeless are often victims. And when people in Bloomington see something, they called the police.

Chief Diekhoff added that police try their best, but they’re not social workers.

“We were trying to figure out how we could break that cycle,” said Chief Diekhoff.

Which is why adding Melissa Stone, Indiana’s first police social worker, was important to the department.

“Hooking up the appropriate resources, and what resources are available, that’s just a huge benefit because the officer doesn’t have that experience or that knowledge,” said Chief Diekhoff.

Bloomington Downtown Resource Officer Amy Romoser said she has been a cop for 17 years.

And for three of those years she was a downtown resource officer in Bloomington before they added a police social worker.

“It makes our job a lot easier. And she (Melissa) has more time to follow up, so that I can take the next call,” said Romoser.

Romoser described Stone as a book of resources for how to help someone.

Bloomington’s police chief said he hasn’t seen a decrease in the number of repeat calls yet, as Stone has only been on the job for a few months.

However, he’s hopeful that in the long run, her position will help make a dent in the number of repeat calls.

Stone said her number on call “is mental health issues, people off their meds or people worried about people. And the second highest population would be the aging and elderly. Maybe people are at the point where they shouldn’t be living alone or maybe neighbors haven’t seen them get the mail in three weeks.”

“Third would probably be homelessness and substance abuse. Kind of goes with all of those things at times,” said Stone.

But she said she mainly deals with the homeless population because of her proactive approach.

“We got out at least once a week to parks and (homeless tent) camps to check in with people,” says Stone. “I get a lot of referrals from officers who have been out."

“Check that people have housing, or are on a housing list. Sometimes we’ve done housing assessments. I really like that part of the week too because people aren’t in trouble, we just go out to actively see what they need,” says Stone.

She also sits on Mental Health Court and was part of the Crisis Intervention Training, which is mental health courses for officers. She helped to develop and teach the classes for CIT.

Stone said she was also given a bullet proof vest by the department.

She says she loves her job because it ties in working with every population she is passionate about helping.

And never knew such a job existed until her sister stumbled across the job posting and shared it with her.

While Stone loves her job, like her colleagues, she finds some days very difficult.

“There’s a limit to what can be done sometimes," says Stone. "And sometimes that happens numerous times in a day and it’s very draining emotionally and professionally."

She says she founds support in social worker groups where her colleagues come together to share with one another and be of support.

She also enjoys running and takes time to de-stress and find balance in her everyday life outside of work.

But for Stone, helping others and finding solutions is what’s it’s all about.

“If I can just spend ten minutes listening to somebody and make them feel heard, it really just changes their day," said Stone. "So while the big things like housing are important, really a lot of people just want to be heard, listened to, and with their story listened to."

“That’s something that’s easy that I can do all the time,” she added.

Stone says while she aims for the big successes like solving the housing issue, it’s the little moments that keep her going.