Just days after President Trump signed the 2018 Farm Bill, legalizing industrial hemp for the first time in generations, an Indiana lawmaker is preparing to file a bill that would also legalize hemp in Indiana. 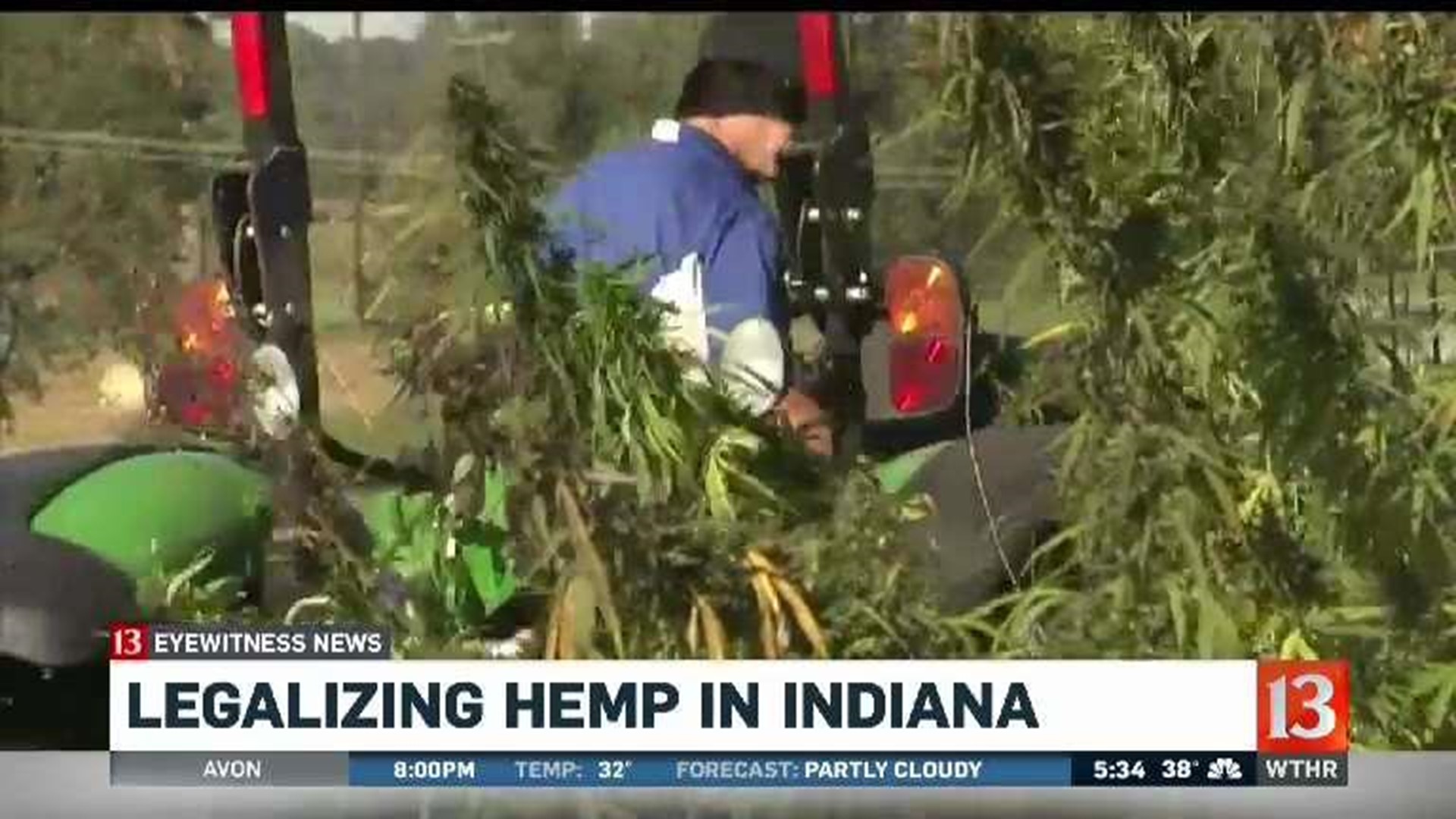 SEYMOUR, Ind. (WTHR) – Just days after President Trump signed the 2018 Farm Bill, legalizing industrial hemp for the first time in generations, an Indiana lawmaker is preparing to file a bill that would also legalize hemp in Indiana.

"It is now an agricultural crop, so state leaders need to educate themselves and get behind this and push this industry to the potential it has in our state," said Rep. Jim Lucas (R-Seymour).

Lucas introduced House Bill 1137, a bill that would have legalized industrial hemp, during the last legislative session, and the bill received bi-partisan support. Lawmakers in the Indiana House passed the bill with unanimous support. The legislation also appeared to have broad support in the state Senate before Governor Eric Holcomb instructed Senate leaders to essentially kill the proposal by referring the topic to a summer study committee.

At the time, Holcomb told WTHR he did not believe Indiana was ready to legalize industrial hemp because state agencies were not prepared to implement proper oversight.

"I want to make sure that the seed commissioner, I want to make sure our universities are on board. I want to make sure the regulatory environment community, that we have the personnel in place – we don’t right now. And so to just say ‘We’re going to go do it,’ [that’s] easier said than done,” Holcomb said, adding that he also wanted to seek assurances that industrial hemp was legal under federal law.

Now that the President has signed the 2018 Farm Bill -- which clarifies that industrial hemp is not the same as marijuana and, therefore, not considered a Schedule I controlled substance regulated under the jurisdiction of the US Drug Enforcement Administration -- Lucas believes Indiana should move quickly to legalize the crop.

"That [Presidential signature] is huge for Indiana. It removes pretty much the only obstacle that Indiana leadership had to this last year. Now that that's happened, we should be fully supporting this," Lucas said. "There is no reason to keep fighting something that we should have done a long time ago."

Lucas said final wording is now being drafted, and he expects the legislation to be filed the first week of January, if not sooner. It would establish a regulatory structure to allow Indiana farmers to grow and sell industrial hemp and to allow Indiana businesses to transport, process and market it. "We need to regulate it to the point it needs regulation, but no more. Let the market work. We need to set this up so farmers can do what they need to do."

Industrial hemp is currently in high demand for its fibers that have many uses in the textile, manufacturing and healthcare industries, but the plant is controversial due to misinformation and misunderstanding. Hemp and marijuana both come from cannabis plants, and that similarity resulted in a federal ban on the growing and sale of cannabis in 1937. Unlike marijuana, however, industrial hemp comes from a type of cannabis plant that has little or no THC (the chemical compound in marijuana that creates a psychoactive high).

For years, many state and federal lawmakers have been urging the DEA and US Department of Agriculture to recognize the differences between the plants to allow farmers to cultivate industrial hemp. Passage of the Farm Act of 2018 clears the way for widespread hemp production in the US for the first time in 80 years. Whether it will be grown in Indiana is yet to be seen.

Farmers like Brian Thompson hope Indiana lawmakers will follow the lead of the federal government. "We need another crop we can grow to diversify the farm right now. It seems like the time is right for hemp," he told WTHR.

Thompson starting farming when he was nine years old, helping his father harvest corn on their farm near Seymour. Fifty years later, his farm is much larger. Thompson and his son, Ben, rely on technical advances to harvest 3200 acres of corn and soybeans at yields he never dreamed of as a child. But higher production does not mean higher profits, due to stagnant and declining prices for corn and soybeans that has impacted the bottom line for farmers.

"The prices being depressed for the last five to seven years, it's a good time for something like this," Thompson said.

Long before federal lawmakers drafted the 2018 Farm Bill, Kentucky legalized industrial hemp and saw immediate results. Kentucky harvested more than 12,000 acres of industrial hemp this year, and the state's hemp industry is credited with creating hundreds of jobs and millions of dollars in revenue.

Thompson would like Indiana farmers to have the same option as those who live nearby in Kentucky. "Lawmakers should not shut the door on hemp. Let us producers choose what we want to grow," he said.

"Yeah, we need to get out of the way of farmers," Lucas agreed. "Let's run with this. It's time to get this done."