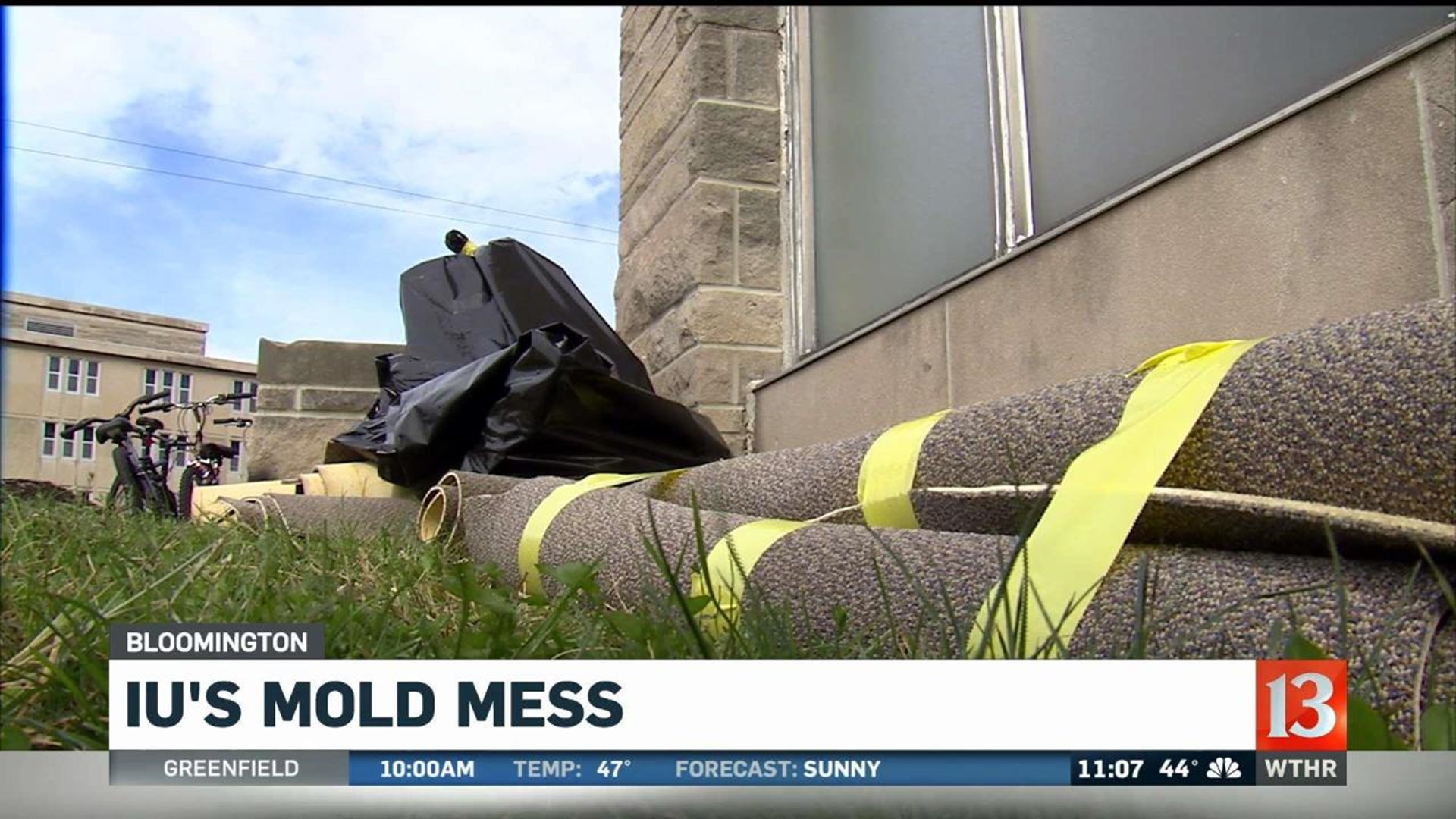 "I am extremely sorry the freshman semester for many students started off with this trying circumstance," McRobbie said.

As McRobbie spoke, crews continued to inspect and remove mold from rooms in the Foster and McNutt quads.

Numbers released by IU late Tuesday afternoon show since last month, the university has received 497 requests for inspections and has remediated 350 rooms.

"We are doing everything we can to provide a healthy and safe environment," McRobbie said.

He also announced that IU would cover the medical costs of any student treated for mold-related illness and pick up the tab for students forced to move out of their rooms before October 15.

"It's not just enough to inspect dorms, but the bathrooms and sinks. We all share the same air and we're all scared," Anabell Padilla said.

Lizzie Martinez said she's been "coughing since I arrived a month-and-a-half ago...I can't do as well as I want to academically because I've been sick and trying to get over a cold."

During his speech, McRobbie said "a message has been sent to each dean and department chair on the Bloomington campus explaining the nature of the problem and instructing our faculty to make accommodations for freshman from these dorms, particularly in regard to assignments and exams."

Rachel Russell was among the students who said IU had handled the situation fairly well.

After mold was discovered in her room, she was displaced for three days.

"The air conditioner had a bunch of mold in it, so when I would sleep, I'd get all stuffed up and not breathe very well. Now it's cleared out and I'm better," Russell said. "I think they handled it quite well by putting kids...in the Union and different hotels."

Her friend Jailyn Walters said, "they did a decent job, but could probably do a little better, maybe by asking or trying to inspect all rooms, because if one floor has a lot of rooms with it, everyone probably has it."

Any student who received medical care for any respiratory illness or other illness related to mold since the start of the school year, will be fully reimbursed. Information on how to file a claim will be posted here.

Free laundry facilities are being provided to all students at McNutt and Foster and a laundry service will be used for all bedding.

Other students voiced their concerns to Eyewitness News earlier Tuesday.

"We’ve been sick for a month. And I started breaking out in a huge rash on my face," say IU freshman roommates Madison McGovern and Emma Ellingson.

Emma says another student's mother told her to get checked. She warned her that mold was already turning up in dorms and she was moving her daughter out.

Now, Emma Ellingson says, "I'm on three medications now due to the mold that is supposedly in my room. We are kind of unhappy about it right now."

By phone from her home in California, Emma’s mother Kelly says she’s frustrated.

"You feel helpless being over 2,000 miles away in San Diego and my daughter is in a dormitory closed down because of mold," said Kelly. "You feel very sad and I honestly feel like I wanted to jump on an airplane and couldn't. I can’t just get there.“

"They did an inspection of my room this morning. Turns out my closet, it has mold in it," said Freshman Dhruvil Patel. "I was kind of nervous there might be mold on my clothes, growing on my clothes it’s really nerve-racking to see. Am I wearing mold?"

Indiana University spokesman Chuck Carney says, "whether it’s got mold that is there or not it’s going to be cleaned up."

This involves chemical cleaning and in some cases pulling up carpeting. IU says the mold could be due to the hot, humid summer.

Dorm air conditioners ran heavily, creating condensation on vents and around windows where the mold grew.

The CDC says this mold is common and usually does not make people sick unless they’re asthmatic or have other issues like allergies.

"I’ve started to realize I’ve had to use my inhaler every day," said Madison McGivern. "And that hasn’t happened in two years."

"We won’t feel comfortable until we know the entire building has been like completely taken care of mold," says the freshman roommates.

"As complaints come in, we send a crew out. We're in full-scale mode," Ben Hunter, interim vice president of public safety said. "We're doing remediation, answered concerns raised and brought in a third party to do independent air testing."

He predicted clean-up would take another 2-3 weeks. As for the cost of remediation and everything else related to the mold?

He said at this point, they don't know.