IPS and universities close for Wednesday due to dangerous cold

Indianapolis Public Schools is joining the growing list of school closures ahead of Wednesday's dangerous cold. 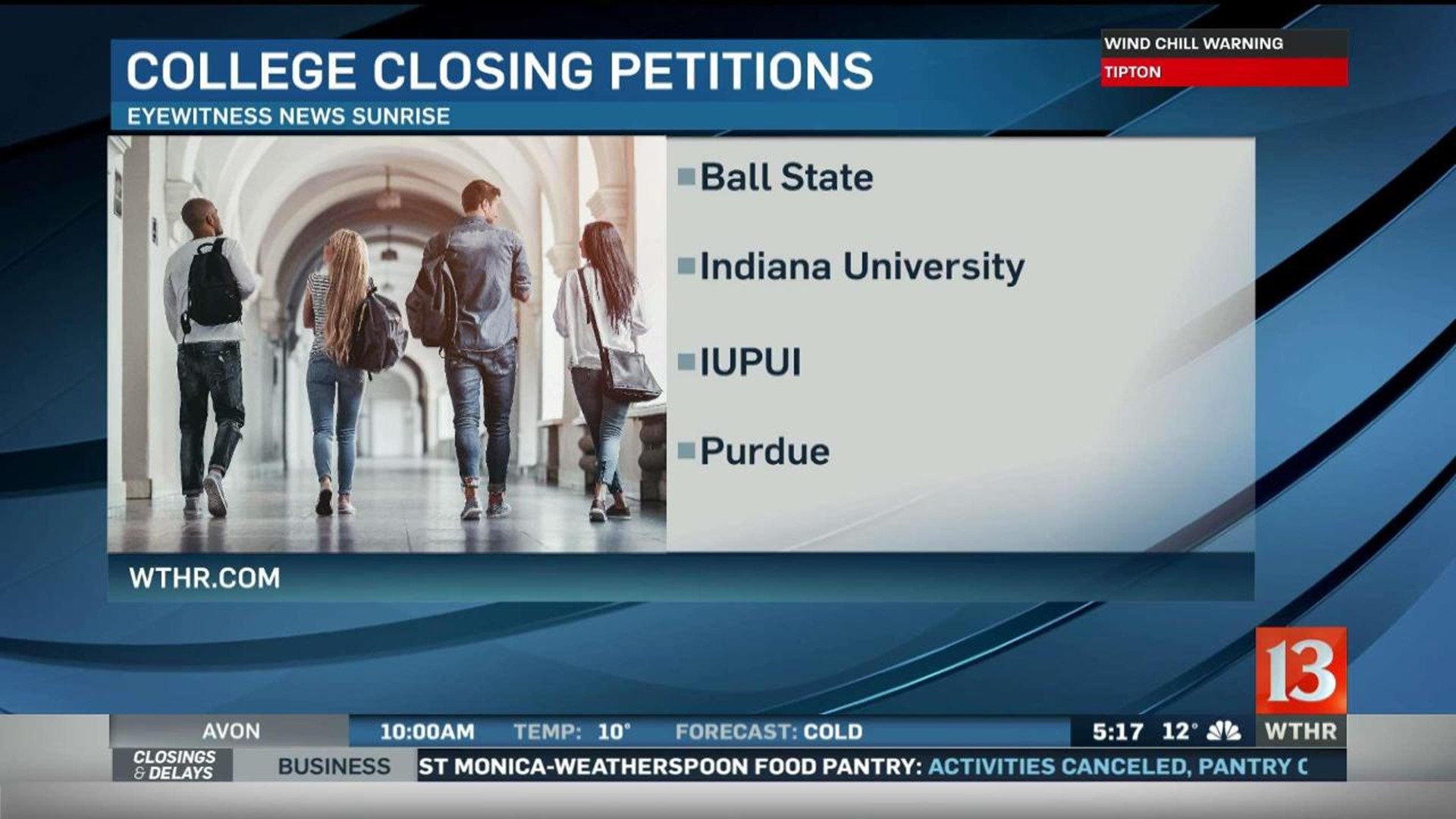 Even though IPS has canceled class, free meals will be available to children ages 18 and younger from 11:30 a.m. to 1:30 p.m. at the following five locations:

Universities across the state have also canceled. Indiana University waited until after 5 p.m. on Tuesday to cancel classes for Wednesday.

IU Bloomington Alert: Classes are cancelled for Wednesday January 30, 2019 due to severe winter weather, however, campus will remain open.

Purdue University announced Wednesday classes were canceled and will resume as normal on Thursday.

Due to the extreme winter weather, classes and student activities at all Indiana Tech locations will be canceled from 5 p.m., Tuesday, Jan. 29, through noon, Thursday, Jan. 31. Online classes will continue as scheduled.

Ball State announced Tuesday they will close Wednesday at 7 a.m. and re-open Thursday at 11 a.m. Essential personnel should still report to campus.

Ball State will be closing Wednesday at 7 am, and will reopen on Thursday at 11 am. Essential personnel should report to campus. Visit https://t.co/0hXsSNKjnT for more details.

Tuesday afternoon, UIndy announced they would be closed all day Wednesday and won't open until 10 a.m. Thursday. Essential personnel will be on campus and Dining Services (Schwitzer Student Center) will remain open.

IUPUI's chancellor tweeted shortly after that they would also cancel all Wednesday classes.

Although classes have been canceled for Wednesday, all buildings on IUPUI's campus will have normal accessibility.

In an official announcement released to the campus, IUPUI says employees should still report to work and "use their best judgment to determine if conditions create an extreme travel hazard."

The Indianapolis Zoo also announced they will be closed Wednesday due to the weather.

Frostbite can happen in less than 10 minutes in the temperatures that are forecast for Wednesday.

As of Monday evening, more than 16,000 people had signed a petition calling for IU to cancel classes on January 30 due to temperatures that are "extremely unsafe" for students and faculty. About 2,700 students had signed a similar petition at Purdue University and nearly 1,000 at IUPUI.

Eyewitness News reached out to the universities for more information about how they plan to proceed in cases of extreme cold. Indiana University is the only school to not cancel classes on Wednesday yet.

The Indiana University Emergency Management and Continuity office said the university would proceed as usual for wind chills between minus-15 and minus-24. The office said they would continue to monitor temperatures and if wind chills dropped between minus-24 and minus-50 for over 24 hours, with an advisory from the National Weather Service, they "will communicate to campus leadership to ensure there is flexibility with the campus operations within IU Policy."

"For wind chills of -50 and below, IUEMC will recommend to campus leadership that they consider cancellation of classes and closure of the campus except for critical employees. This would fall into the category of the NWS issuing dangerous advisories or warnings," the office said in a statement.